I'm laughing at two recent developments in the fashion industry.

First, J Crew introduced a new line of ladies' lace tights . . . one of which has a decidedly unfashionable appearance! The Daily Mail reports:

At first glance, this picture on its website of the model with what looks like hairy legs could be the handiwork of a mischievous graphic designer - or maybe the model just needs to find a working razor. 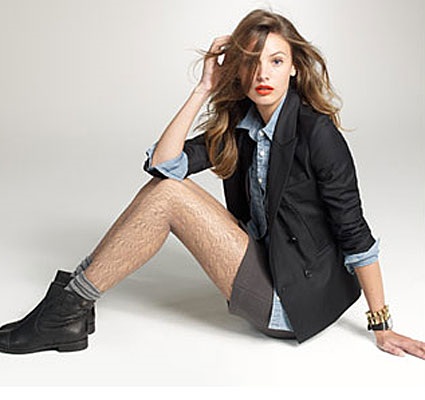 In actual fact, they are J Crew's latest lace tights range - which, from a distance, appear to replicate the look of very hairy, unshaven legs.

The tights are in fact in a lacy fawn pattern.

But the shapes and texture of the pattern make the overall effect from a distance something quite different from what, presumably, J Crew intended.

The tights are certainly attracting plenty of attention on the internet - but sadly for all the wrong reasons.

The tights are described on the store's website as 'an essential ingredient in the season's textural mash-up'.

I'm reminded irresistibly of Miss D.'s comment. (She's Alaskan, so she can say this without giving offense.) She pointed out once that Alaskan ladies don't tan or shave their legs much, because of the long months of winter cold and the very short summer season. As a result, she claims, Alaskan women are frequently described as having "skin like porcelain, legs like Chewbacca!" Perhaps the model in the picture above can identify with that . . . ?

Second, Marks & Spencer in England is introducing a new range of underwear for men entitled 'BodyMax'. The Guardian reports:

Flushed with the success of its "2 sizes bigger" bras, M&S is about to give men a boost too, with what it calls "frontal enhancement" pants. 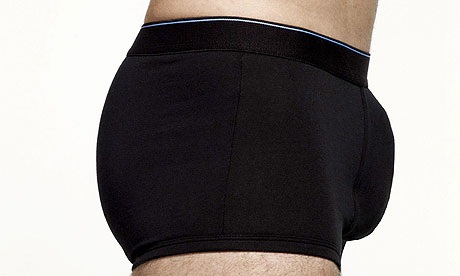 These offer a greater "side profile" and come with a "hidden front pouch" to "shape and enhance your silhouette".

There is also help for chaps whose problems are behind them: "bum lift pants" to create "a visibly sculpted look".

I'm not sure those M&S underpants are worth the price . . . in my military service days, sailors used to achieve the same effect by stuffing a pair of socks down the front of their pants! One enterprising man even went so far as to insert a length of manila hawser into his underpants, trailing suggestively inside of his trousers to halfway down his thigh. It certainly looked impressive. Unfortunately, he once made the mistake of using a piece of brand-new manila rope, with stiff, bristly fibers. They rubbed him raw, and left him looking like he'd suffered some sort of unmentionable genital rash for a month or so until his skin grew back! Needless to say, for that month he didn't have much success with the ladies, and was the butt (you should pardon the expression) of many inordinately rude comments when taking a (communal) shower . . .

From this week, the man in search of instant shock and awe has a new option. Britain's Marks & Spencer clothing chain is offering "frontal enhancement" underpants, which promise a 38 per cent "visual enhancement in size".

Men have tried this sort of enhancement in the past, albeit in less formal ways. Allegations have long been made about Mick Jagger performing with a banana shoved down the front of his pants. Every time the Rolling Stones visited Australia, fans would worry that Keith Richards would be arrested by customs for trying to smuggle drugs in. I always thought it was more likely to be Mick, caught trying to smuggle fruit in.

As every Australian knows, this is by far the more serious crime.

Mick wasn't the only one. Even at school, there were allegations of certain boys trying self-enhancement using a wad of tissues, much in the way that teenage girls would stuff their bras. Presumably, for both genders, if the tissues didn't work they could be fished out later when one was back home after the party sobbing on one's virgin couch.

But what if they did work? This is the part of the technique I never understood. The deception would be revealed in the very moment of its triumph. It would be like inviting people to the Sydney Opera House for a performance of Wagner's Ring and walking on stage with a ukulele.

In all the books about marketing, the principle is to "under-promise and over-deliver". The stuffed-tissue technique is the opposite. Disappointment is an inevitable result.

There's another problem. In the Marks & Spencer catalogue, the "enhancement underwear" is always photographed side-on. Presumably, it is from this angle, and only this angle, that the 38 per cent visual enhancement is achieved.

This is all very well but when approaching someone at a party, one rarely does so sideways. "Hello, I'm Ralph," spoken while executing a crab-like crawl across the patio trying to hold one's champagne flute aloft, is unlikely to cut it with the more discerning sheila.

Perhaps this is the way you can tell if someone is wearing enhancement undies: he'll be the guy standing side-on to the rest of you, hands on hips and groin thrust forward, positioning himself so as to be backlit by the porch lights.