Pumpkin art, and a Halloween tutorial


In 2008 I published a picture of an exceptionally well-carved pumpkin. I'd no idea who made it, but it's since emerged that it was the work of US artist Ray Villafane (the link is to his Web site). The Daily Mail has just published an article about his extraordinary 'vegetable art'. Here's an excerpt.

It takes several months to grow the fruit but amazingly just two hours for artist Ray Villafane to sculpt these petrifyingly detailed portraits out of pumpkin. 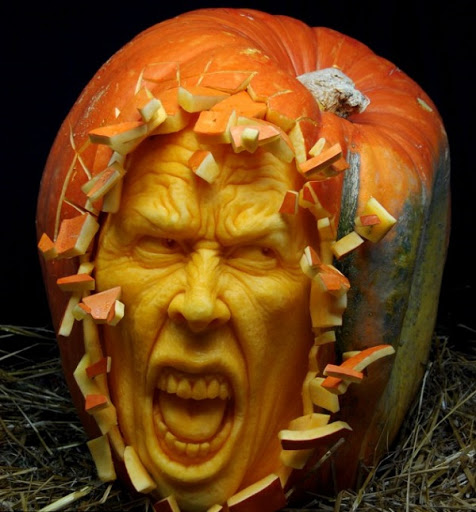 The American model designer and former art teacher uses spoons and a scalpel to carve the innocent orange gourds into Halloween horrors in double quick time.

As you might expect Villafane, who has worked for D.C and Marvel comics, is very particular about his pumpkins.

'Not all pumpkins will look good and the most important thing about a pumpkin is its weight,' he says.

'You need to pick the meatiest pumpkin.

'Sometimes I pick up a beautifully shaped pumpkin but when I do I realise that it is not heavy enough. Its wall is just not thick enough for the carving rigours.

'I also like a pumpkin with character. One with knobbly ridges is good, so that I can utilise that in the carving procedure, like with sculpting noses.' 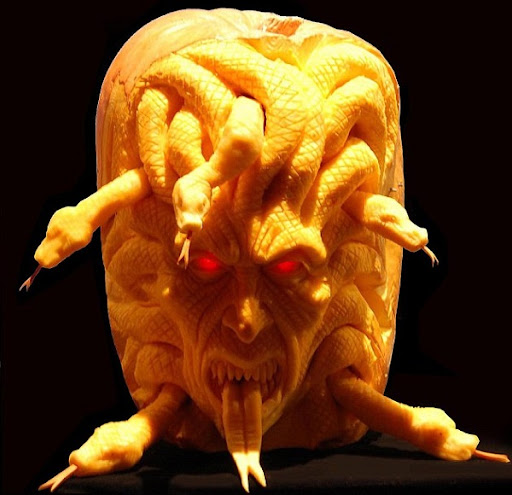 Villafane, 41, has become a minor celebrity in the States and his weird and wonderful work has featured on a range of TV programmes.

Over the last four Octobers his pumpkins have raised his profile to the point where he has become something of a Halloween staple on TV and across the internet.

Intrigued, I looked up Mr. Villafane's Web site. On it, he has a very useful tutorial on how to carve your own pumpkin, including choosing the right one; the tools you'll need; and step-by-step instructions. Highly recommended for all those who'll be carving pumpkins this Halloween.