First photograph of a human being?


Via NPR we learn of an 1838 photograph that might include the first human beings to ever be recorded on film.

This is a Daguerreotype taken by the inventor of the process, Louis Daguerre, in 1838. It is a view of the Boulevard du Temple in Paris. To achieve this image (one of his earliest attempts), he exposed a chemically treated metal plate for ten minutes. Others were walking or riding in carriages down that busy street that day, but because they moved, they didn't show up. Only this guy stood still long enough—maybe to have his boots shined—to leave an image. 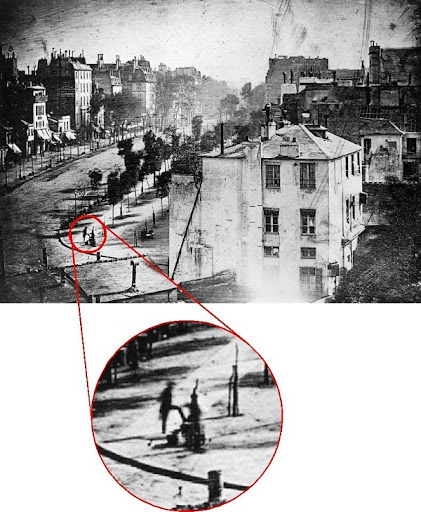 Other primitive forms of photography had preceded this picture by over a decade. But this anonymous shadowy man is the first human being to ever have his picture taken. There is also the very faint image of the bootblack bent over his work.

Now there's a fascinating piece of technological history! I wonder who the unknown pedestrian was, and the bootblack? I'm sure they never knew they were being recorded for posterity.