It seems someone in England has far too much time on his hands - and a fair bit of mechanical ability! The Daily Mail reports:

For anyone who’s had to leap out of the way of a passing mobility scooter, it’s the stuff of nightmares. 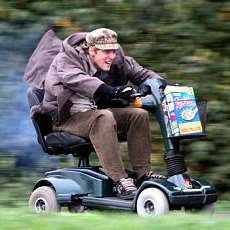 Colin Furze has adapted a conventional electric model into a petrol-engined speedster which has reached an astonishing 69mph.

‘You hear people complaining about scooters going slowly around supermarkets and blocking aisles so I thought it would be a laugh to make a really fast one,’ said Mr Furze, 31, a plumber from Stamford, Lincolnshire.

Guinness World Records said he would be considered for the first mobility scooter speed record if he could hit 100kph – 61.4mph.

He is now planning a time trial at the Santa Pod Raceway in Northamptonshire to claim his place in the record books, and says: ‘My aim is to hit 70mph.’

Mr Furze was given the scooter by a friend who sells and repairs them.

The 125cc engine was taken from a motorbike.

He added: ‘I was told by Guinness that I could modify the engine but I wasn’t allowed to change the appearance in any way so I couldn’t give it bigger wheels or make it more stable.

‘I haven’t had any crashes but the wheel fell off when I was slowing down once. I’ve nearly been in the hedge a few times.’

Having had to use one of these things for a couple of years after my injury in 2004, I know how fundamentally unstable they are, even at six or seven miles per hour under battery power. The thought of driving one ten times as fast with a gasoline engine gives me shivers! (On the other hand, I'm betting shoppers would clear a path for me through the aisles at Wal-Mart! Perhaps I could fit a truck air-horn to the thing, to make sure of that . . . )

Labels: Automotive, Boys and their toys, Funny, The Mind Boggles
Email ThisBlogThis!Share to TwitterShare to FacebookShare to Pinterest

The next obvious step is displacement classes. If he can use a 125, I can use a 250, and sooner or later someone named Billy-Bob will use a 350 Chevy.


Oh the humanity! Where will it all stop? Oh wait, I know: With a jet engine.