A few months ago I wrote about China's real estate bubble, and pointed out that there were whole cities sitting empty and unused. They'd been built on the orders of local and regional Communist Party authorities, and/or by speculators.

It looks like the problem's getting worse. The Daily Mail reports:

As sprawling housing developments and skyscrapers in one of the world's most populous countries, these tower blocks and recently-built neighbourhoods should be busy and swarming with people.

But on closer inspection these stunning pictures show elaborate public buildings and open spaces which are left completely empty. 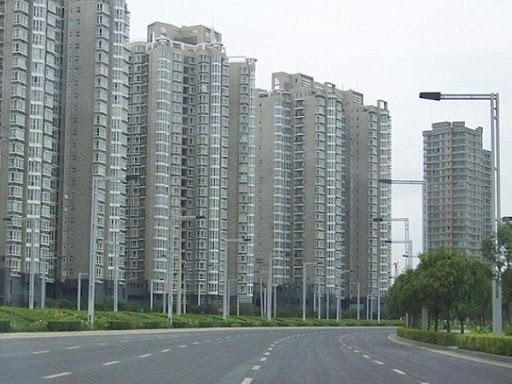 The most recent pictures of unused housing emerged as China announced plans to build 20 cities a year for the next 20 years.

And despite pictures last year showing some of the reported 64 million empty homes, Chinese authorities have since erected masses more buildings.

Gillem Tulloch, an aanlyst for Forensic Asia Limited, described one of the areas in Chenggong, as a 'forest of skyscrapers'.

When asked what has happened in the past six months since the ghost cities were built, he said: 'China built more of them.

'China consumes more steel, iron ore and cement per capita than any industrial nation in history.

'It's all going to railways that will never make money, roads that no one drives on and cities that no one lives in.

'It's like walking into a forest of skyscrapers, but they're all empty.'

There's more at the link, including many more pictures of the 'ghost cities'. Bold print is my emphasis. Recommended reading.

Just think of the billions upon billions of dollars that have been invested in these 'ghost cities' - and the billions (trillions?) more that will be spent in future, according to the report. I wonder how much (if anything) this has to do with reports of growing social unrest in China?

AN eruption of protests throughout China has sent armoured vehicles into town centres, prompted an internet blackout by the government and left thousands across the country blogging about "crazy" violence on the streets.

The summer surge of protests, which flared in the southern industrial hub of Zengcheng over the weekend, has been linked to a range of frustrations with modern China - furies that have drawn the government into crackdowns on activism and massive increases in the domestic security budget.

Some Chinese academics believe that the true number of protests in the country last year was more than 180,000. After several big clashes in recent weeks the names of half a dozen big towns have been eradicated from the search engines of the country's most popular microblogging sites.

One of the "disappeared" cities, Dongguan, is the fourth-largest producer of exports in the country and has a population only slightly smaller than London's.

The recent violence, however, has exposed the limits of the government's ability to control the urban population using internet censorship what party leaders refer to as "social management".

Authorities have turned to displays of raw power, deploying paramilitary police and armoured vehicles in at least three cities in as many weeks to prevent violence from spiralling further as protesters have repeatedly directed their anger at government buildings, often ostentatious symbols of power.

I have a feeling that the 'economic miracle' of China may be on very shaky foundations indeed. If it comes crashing down about its citizens' ears, that'll be both tragic for them, and disastrous for the world economy.

Thanks for sharing. Reminds me of the Potemkin villages in the USSR. Take that Thomas Friedman.

As I recall from what I've read of Chinese history and Confucian philosophy, if the Emperor loses the Mandate of Heaven, the people are justified in removing him. One sign of having lost that Mandate was natural disasters (earthquake, flood, drought). Something tells me that the People's Government is getting very concerned about the people's memory.
LittleRed1

Maybe my tin foil has slipped off, but I was wondering whether some of these newly-build cities were conceived as places to relocate unhappy people (read: dissidents) to get them out of their home turf. Take folks from many disparate regions, plunk them down in a brand spanking new town, and tell them how grateful they should be for the new digs. This would disrupt local dissident activity for a time (in theory), and the language differences of the relocated people would delay same for the same theoretical time. Or I'm just reading too much into it.

This is what you get when the Department of Housing and Urban Development operates without adult supervision. Packing people together is very efficient from an urban managers point of view, but works very poorly in real life.

Want to know how this will end? Google Cabrini Greens.

I, too, thought like Chris, and wondered if the goal was a mass relocation.

I wonder which government will spend itself to oblivion and ruin first, ours or theirs.

These "cities" are clearly visible on GoogleEarth at close detail.
There are thousands of tall buildings being built in what would be 20 years ago small rural communities.
It's all gonna end in tears...