Of aircraft, crashes, and a miraculous save


On Monday I posted a video clip of a Czech-manufactured Let L-410 Turbolet commuter airliner making a very heavy landing, to the detriment of its nosewheel (and probably the passengers and crew as well).

I've seen L-410's running around Africa for some time. 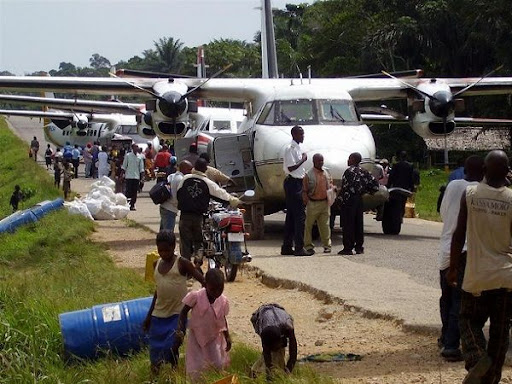 They're tough little planes, able to take a beating and keep on flying in the best 'bush plane' tradition. (One was lost in bizarre circumstances in the Congo last year, when a crocodile smuggled aboard by a passenger caused panic as the aircraft came in to land. The passengers stampeded, upsetting the aircraft's balance, and it crashed, killing 20 of the 21 people aboard. I wrote about it at the time.) They're not the world's most comfortable planes, but they've been pretty reliable in my experience.

They're also used to transport parachutists (there are 30 or 40 used in Europe for this purpose, plus many others in Russia and the countries of the former Soviet Union). In 2003, one of them was about to launch a group of parachutists from 13,000 feet when something went terribly wrong. The Times reported:

Twenty-three people were aboard the plane over the Tver region, northeast of Moscow, when catastrophe struck. Remarkably, 14 were able to float to safety after the tail and left wing snapped off from the main body of the aircraft.

As they drifted down, they could only watch as the stricken plane carrying their friends and two crew spun out of control and crashed.

According to witnesses on the ground, the Czech-made Let 410 broke up spectacularly at 13,000ft. The passengers from an aviation club near the village of Barki were still about 90 seconds from their planned jump zone.

Officials believe that the survivors were swept out of the main body of the aircraft after it began to fall.

Aleksandr Parfyonov, deputy head of the Tver region’s emergency department, told Rossiya television: “By a miracle they were pulled out by a stream of air and they landed.” Three of the survivors were reported to be seriously injured.

What makes this accident more remarkable is that one of the survivors was saved by an automatic parachute opening device, designed to save skydivers who lose consciousness or have other problems that prevent them from pulling the ripcord themselves. The device is known as the CYPRES, which stands for CYbernetic Parachute RElease System. Its manufacturer, Airtech GmbH, is celebrating twenty years production of the device in 2011. On its Web site, Airtech has a list of those saved by the device. It reported the crash in 2003 as follows:

01.March 2003
Moscow, Russia
Student CYPRES
A Let 410 stalls on jumprun at approx. 3.900m. The plane spins down fast and goes into a dive with over 500 km speed. As the tail of the plane rips off, four skydivers make it out of the plane. One skydiver is unconscious as his CYPRES fires. The reserve canopy pulls him out of the plane. Nine skydivers were lost in this crash.

So his CYPRES activated inside the plane, as it fell from the sky, and his parachute pulled his unconscious body out of the hole where the tail and rear fuselage had been! Talk about having a lucky day . . . !!! (I note, too, that the L-410 is certified to carry 2 crew and up to 19 passengers. Adding up the numbers mentioned in the above reports, it sounds as if this one was carrying at least 23 parachutists plus 2 crew. Furthermore, each parachutist would have been carrying 25 to 30 pounds of equipment, over and above their own body weight. Sounds like a seriously overloaded - and therefore unstable - aircraft to me.)

There are many other stories of parachutists and skydivers whose lives were saved by the CYPRES device. This one made me laugh (bold print is my emphasis):

16.March 2003
USA
Student CYPRES
Jumper had not jumped in about 12 years until last summer. Went through retraining and was out on student gear. First jump this year, seemed very nervous. Left airplane stable, began to spin, did nothing until CYPRES fired, then put out the main - landed with 2 parachutes. Jumper wasn't able to explain exactly what happened. Was told to take up golf.

A very appropriate recommendation under the circumstances, if you ask me!

Peter, even though there were a couple of extra bodies in the airplane, that's not necessarily a sign that it was overloaded. First, a lot of jump aircraft have their seats removed, which would save a lot of weight; second, it would almost certainly not be carrying a full load of fuel for an up-and-down trip; finally, the 19-seat number isn't so much a design issue as a regulatory one: flight attendants are required at 20 passengers, so a lot of airlines use 19-seat airliners to avoid the staffing cost. Most of those airplanes carry more.