The Cold War heated up, 63 years ago today


On June 24th, 1948, Soviet occupying forces in Germany closed all land access routes to the Western sectors of Berlin, which was surrounded by the Soviet zone of occupation after World War II. The Berlin Blockade had begun. Within days, the Western Allies would begin an airlift to bring in the supplies the city needed. It would continue for an unprecedented fifteen months. 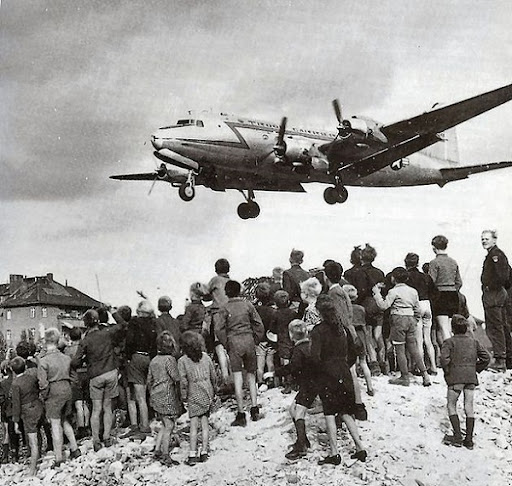 I wrote about the Airlift in detail in Weekend Wings #22. There are lots of photographs at the link for those interested. A few statistics about it:

To this day, Berlin residents commemorate the Airlift every year, and honor the memory of those who died keeping them alive. This year's celebrations began last month. May I suggest we should do likewise on this side of the Atlantic?

Many of the loadmasters and crew chiefs flying on those aircraft spent a lot of their spare time tying small parachutes to packets of candy. On final approach, they would toss them out the side doors and they would drift down over the city. That crowd of children in the picture are waiting for one of those aircraft to pass overhead.

Of course, today those air crew members would have to be severely reprimanded for ZOMG endangering the chiiildren!

When I was going to college in Germany, Hummell (yes, the overly cute china figures Hummell) issued a two part limited edition about the "Berliner Luftbrüke." One showed the air-bridge memorial from Frankfurt and the other the memorial at Templehof, each with a child and a signpost, and an embedded metal coin with the picture of an airplane on it. Kitschy? Perhaps, but heartfelt.

Well done Peter, and the candy WAS important!