Larry Correia's at it again!


My blogbuddy Larry Correia is having a bumper year. 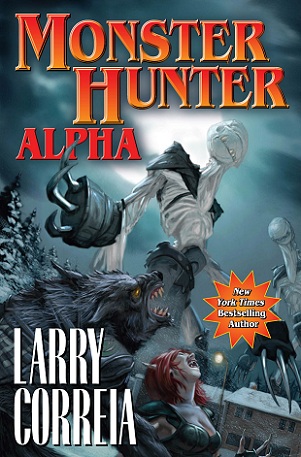 Four of his books are due to be published in 2011 (well, three by him alone, and one written with a co-author). The next one out will be the third in the "Monster Hunter" series: Monster Hunter Alpha.

Monster Hunter Alpha will be published on August 1st this year. If you want an autographed copy, Larry will be offering them through Uncle Hugo's bookstore in Minneapolis, MN. Click on that link to pre-order one. Apart from that, of course, they'll be available through Amazon, Barnes & Noble, and other online retailers and local bookstores.

One thing I particularly like about Larry and his publishers is that they haven't fallen into the trap of some successful authors, and started publishing his books initially in a hardcover edition or supersized paperback, at inflated prices. Sure, they've offered such an edition for those who want it (I got his previous book, The Grimnoir Chronicles Vol. 1: Hard Magic, in hardcover), but that's an optional extra. Larry's 'normal' books remain in mass-market paperback size at affordable prices - very important in an economic climate like ours. If I can get my manuscripts to a publishable standard (they're in beta readership right now), I plan on following that example.

Monster Hunter Vendetta made it to #27 on the New York Times bestseller list when it came out. That's a phenomenal performance for a dark fantasy novel, particularly when you consider it was competing against every single fiction mass-market paperback in the country! Here's hoping Larry can do even better with this one.

I've decided to base my whole decision about buying this series on one review of the first book on Amazon:

"In the interest of full disclosure, I did not read this entire book. I read two chapters from the Baen Free Library..."

Not really, I hate reviews where the person starts out admitting they didn't read it.

Unfortunately, I won't be reading it at this time. I have a ridiculous number of books and I decided earlier this year that I'm only buying ebooks from now on. I see that the book is only $6.39 at Borders, $7.99 at Amazon, which is a good price but I'm out of space to store them.

I don't know how the decision to make an ebook is made. I assumed that all new books would be available in that format but apparently not.

Just ordered from Amazon.co.uk. Can't wait, but must.

Anonymous--All Baen books are available in ebook format, just not on sale at Amazon or B&N yet. Go to www.baen.com for sample chapters of all our titles. I will say if you're a friend of Mike's you'll probably like Larry's stuff, too.--Toni Weisskopf, publisher, Baen Books

Actually, I have yet to see The Grimnoir Chronicles in mass market paperback format, I had to buy the book in trade paperback (big size).