Q: Is it true that "cleanliness is next to Godliness"?

A: Only in an Irish dictionary.

Two news reports this week have had me thinking about cleanliness. The first concerns dishwashers, which were relatively scarce in South Africa, where I grew up, but which seem to be ubiquitous here in the USA. The Telegraph reports:

For many householders, it is most sparkling area of the kitchen. But the inside of people's dishwashers could be harbouring potentially lethal bugs, according to scientists.

The moist and hot environment, combined with the alkaline water caused by the dishwasher tablets, means that the machines appear to have created a previously unknown and possibly serious threat to human health, the research paper has suggested.

The scientists studied 189 domestic dishwashers in 101 different cities around the world. They found 62 per cent of dishwashers contained fungi on the rubber band in the door. More than half of these included the black yeasts Exophiala dermatitidis and E. phaeomuriformis which are known to be dangerous to human health.

Writing in the journal Fungal Biology, Dr Polona Zalar of the University of Ljubljana, said that "the potential hazard they represent should not be overlooked".

Her co-author Nina Gunde-Cimerman told The Daily Telegraph: "One thing that is not in the report is that we tested the dishes after they had been cleaned in these dishwashers and they were full of this black yeast, so too the cutlery that you put in your mouth. We just don't know how serious this could be."

This is the latest in a long line of health scares to raise concerns about everyday consumer goods. Which?, the consumer group, found that computer keyboards contained five times as many bugs as a lavatory on average. Meanwhile tests on shoppers’ bags, by the University of Arizona, revealed half contained traces of E.coli, the food poisoning bug that killed over 20 people in Europe over the last month.

I hand-wash every dish before putting them in the dishwasher, because the neutered dishwashing soap we're allowed to use today doesn't get them clean enough for my taste; so I've long regarded the dishwasher as more of a rinsing and sterilizing assistant than a cleaner. I guess I'm going to have to rethink that . . .

Next comes a report that makes me smile. 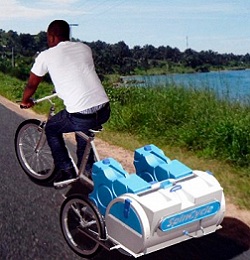 Richard Hewitt ... has come up with the 'Spincycle', a device which washes and dries clothes by using pedal power.

The device is fitted to the back of a tricycle, which is loaded with clothes, detergent and water before being pedalled around for ten minutes.

It is then drained and filled with rinse water before another ten minute session of cycling completes the wash.

Richard hit upon the idea after a recent visit to Burundi in Africa, where he visited a children's orphanage.

'One of the tasks I did at the orphanage was to wash around 30 loads of childrens' clothes by hand,' he explained. 'It was extremely time consuming and I thought that ' there must be an easier way than this.'

The Spincycle makes me smile because I can just see a Tony Little or a Richard Simmons (do follow those links, they're hysterical!) working out how to mount this gizmo on a treadmill or some sort of platform. Next thing you know, we'll be seeing infomercials about how you can pedal to get fit, lose weight and do your washing, all at the same time, in the comfort of your own home! Who will they approach for a celebrity endorsement, I wonder . . . Lance Armstrong?

Buy some TSP TriSodium Phosphate. Add 10% by weight to power soap. Actaully I think a lot less would also work but that is the amount I heard. Since I do not have a dishwasher I hand wash. In liquid soap I use about 1/4 teaspoon for a normal bottle.

Those who sell newspapers have nothing to fear but running out of things to fear.

Mustard gas and a walk around the block are both potentially lethal. So where, on the scale of "potentially lethal," are these scary microbes in your dishwasher? The article is devoid of any measurement of the scale of risk. Left to its own devices, one's imagination naturally goes to the most dramatic outcome (horrible disease and tortured death!), but the reality of it is probably pretty boring.

I hand wash utensils because I live alone. Also I sparingly use paper plates because my family passed down timber co. stock to me.
I have read that vinegar can help in a automatic dishwasher.

We have a septic system, therefore don't use the dishwasher, now a storage device. Dawn in the sink, with a HOT water rinse. Vinegar in the laundry rinse instead of softener. Vinegar also in the toilets, sinks and tubs.But to be fair, my mate and I live alone, the kids are gone, so we have few dishes. I think you have to be VERY motivated to hand rinse in boiling water, which is what a dishwasher can do easily. Six of one, half a dozen of the other? :)
I had forgotten about the TSP. Thanks for the reminder.