I've read of many weird and wonderful concepts in aviation over the course of its existence, but this one's both new to me and weirder than most!  Livescience reports:

An aircraft that resembles a four-point ninja star could go into supersonic mode by simply turning 90 degrees in midair. The unusual "flying wing" concept has won $100,000 in NASA funding to trying becoming a reality for future passenger jet travel. 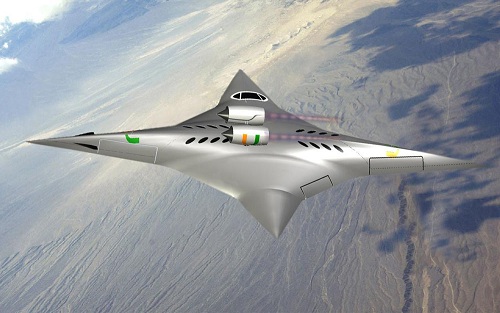 The supersonic, bidirectional flying wing idea comes from a team headed by Ge-Cheng Zha, an aerospace engineer at the University of Miami, and including collaborators from Florida State University. He said the fuel-efficient aircraft could reach supersonic speeds without the thunderclap sound produced by a sonic boom — a major factor that previously limited where the supersonic Concorde passenger jet could fly over populated land masses.

Zha's bidirectional flying wing ... essentially lay[s] two flying wings on top of one another at a 90 degree angle, so that the aircraft faces one way for subsonic flight and rotates another way for supersonic flight.

The midair transformation allows the aircraft to fly in its most fuel-efficient modes at both subsonic and supersonic speeds, Zha explained. Jet engines located on top of the aircraft in concept illustrations appear to rotate independently of the aircraft so that they can always point forward in flight.


There's more at the link.  Here's a University of Miami computer graphics video of the concept (with apologies for their ghastly choice of music!).

Dr. Zha has other videos on YouTube, including a two-year-old five-part series discussing his supersonic flying wing:  click the links for Part 1, Part 2, Part 3, Part 4 and Part 5.  He foresees a bright future for aviation in the USA.

I must admit, I'd never considered an aircraft that can turn 90° in mid-air like that.  I've no idea whether it's practically possible, given that it's only a theory at present;  but if Dr. Zha can make it work, I guess the sky really is the limit!  Only problem is, if a shuriken-shaped aircraft is involved in a mid-air collision, you know who's going to be blamed . . .

Interesting concept, but there is ALWAYS going to be a sonic boom, that's physics... Just sayin...

Doesn't that have something to do with sexual orientation?

As far as I know it's against FAA and CAA regulations to break the sound barrier over populated areas.

That'll put a crink in the project. Unless they plan on using it to fly from LAX to Japan or China where the majority of the trip is over the Pacific.

As I recall the Concorde had a similar problem but most of its journey was over the Atlantic.

Toejam, you're correct, all the Concorde flights had to be sub-sonic over the USA. Only the military (and the Space Shuttle)were allowed to 'routinely' go supersonic, but only in limited (low population) areas or specific restricted areas.

Cool, they modeled it in X-plane. Guess I'll try finding it this weekend.

Concept is awesome. Seen some really simmilar flying wing/swing wing designs in the past but this is the most practical. Especially as it negates the concord's problems at lower speeds.

Am I the only one wondering where the emergency exits are? Or where the tractor beam is located?

@non-com
I think they might mean that it's better suited to subsonic flight than the Concorde and therefore gets around the whole sonic boom problem entirely by just not going into that regime.