At last, someone gets it!


Perhaps I take my reading too literally, but for many years I've been highly annoyed at sword-and-sorcery or fantasy novels depicting female heroines wielding mighty swords and wearing boobalicious armor, demolishing hordes of opposing warriors without breaking into a sweat or mussing their makeup.  For example, this Red Sonja comic cover is reproduced here courtesy of Wikipedia. 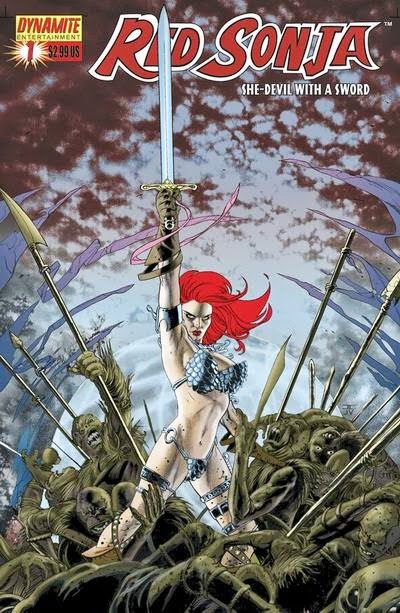 Speaking as a combat veteran, I'm here to tell you, muscle mass counts.  If the average woman takes on the average man, she'll lose any physical fight because he outmasses her and has greater strength.  If she's got extreme skillz, she might hold her own - or she might not.  His superior mass and strength will still wear her down if the fight's prolonged.  Furthermore, she has to get in close to land a telling blow.  If he can pin her at that instant, immobilize a limb or capture the blow as it's launched . . . she's neck-deep in the proverbial doo-doo.

The same applies to the fantasy armor worn by so many of these babes.  It's precisely the opposite of what armor should be!  Now Tor, publisher of many books in this genre, finally spells it out.

Assuming that you are avoiding the blow of a sword, your armor should be designed so that the blade glances off your body, away from your chest. If your armor is breast-shaped, you are in fact increasing the likelihood that a blade blow will slide inward, toward the center of your chest, the very place you are trying to keep safe.

But that’s not all! Let’s say you even fall onto your boob-conscious armor. The divet separating each breast will dig into your chest, doing you injury. It might even break your breastbone. With a strong enough blow to the chest, it could fracture your sternum entirely, destroying your heart and lungs, instantly killing you. It is literally a death trap—you are wearing armor that acts as a perpetual spear directed at some of your most vulnerable body parts. It’s just not smart.

Now, if they can just get their authors, marketers and cover illustrators to listen . . .

I normally nod in agreement with your posts but sadly this time I cannot.

Bear in mind these cartons are FANTASY, involving MAGIC and SORCERY. It is the intent of the author to tell a story, to provide entertainment, to take us out of the hum drum world and into the realms of the magical, the impossible, the fantastic.

I doubt for one moment they are concerned with muscle to weight ratio's, the relevance of armour, or many other realities.

If you want reality, watch the History Channel.

It's not intended for protection, it's for distraction. If a chick shows up on the battlefield dressed like that, all the guys are gonna experience that syndrome where all the blood goes to the little head and the big one shuts down entirely.
Then she just outsmarts them. See, they ain't stupid!
MichigammeDave

What Anonymous said. Female fantasy characters wear that armor because boobies. The target audience, at least in the 1960's to 1980's, was young, adolescent men. Someone dressed up like a historically accurate Joan of Arc wouldn't have sold.

And I've always been a sucker for a redhead.

Over at Larry's place, when the covers for the latest Monster Hunter books came out, someone invoked the law of inverse armor. The less there is, the more protection it grants, and the more powerful/well armed/competent the woman wearing it. That seems to be the best explanation I've seen for, oh, Boris Valejo, and 95% of the comics I've seen.

"If you want reality, watch the History Channel."

Really? The channel with the shows about ghosts, ancient aliens, and similar stuff? The one that seems to have an obligatory reference to Global Warming in any show about contemporary times?

When you can get bracers that add +5 to your armor class, other kinds of fantasy armor don't seem so silly.

Yes, I have a copy of Chainmail along with the original supplements titled "Dungeons and Dragons" on my shelf....

Flash-Bang holster. That says it all. Males will not stand a chance against a woman's bosom.
http://www.google.com/search?q=flash+bang+holster&biw=1920&bih=1024&tbm=isch&tbo=u&source=univ&sa=X&ei=bQKgUbHINaXy0QGquICQBw&ved=0CEoQsAQ

I'm with you on this one, Peter. Heroic fantasy is fun, suspension of disbelief and all that, but somehow I always found comics with poor Red Sonja's SI-model build and stupid "armor" detracting from immersion into the story/world. (Yeah, maybe selective disbelief in a world with Stygian wizards, elder races of snake-men and so on is kind of stupid, but I'm not claiming to be logical or consistent in this.)

Her nearest Hyborean-age counterpart, Valeria (Red Nails) was not described as a skinny chick by any means. (Red came from other REH stories, not the Conan world, as the reader will recall ....)

Dave Sim lampooned Red's armor in some early issue of Cerebus (I think) where the wizard Henrot dumps a chainmail bikini-wearing Red Sonja clone: "Well, I decided that I wasn't as partial to scar tissue on breasts as I thought."

Speaking of Henrot, I always felt that Frank Thorne's art, with all its curlicues, helped kill Red's comic book. Sorry, Frank, I know you really put your heart into Sonja, but the art didn't help the cause. Barry Windsor-Smith at least had her in a mail shirt, though apparently without any padding underneath. Yeouch!

You may want authors to listen but I much prefer the appeal of those scanty bikinis of armor. ;)