The most expensive case of ammo I've ever ordered


The ammunition drought continues in full force.  There are a few signs that the situation might be easing, but no sustained lessening of pressure on suppliers from avid shooters.

I've taken my own advice (from the article linked above), and cut down on the number of firearms I'm keeping, and rationalized the number of calibers/cartridges in my collection.  On a limited budget, I don't really have a choice.  On the other hand, the money raised by doing that has enabled me to build up my stocks in calibers/cartridges I really need, and I now find myself with sufficient for the next few years at least.  By shopping around, and swapping ammo when possible rather than buying it, I've been able to achieve that without breaking the bank.

As part of that process, I've been trying to build up my stocks of high-quality defensive ammunition in .223 Remington / 5.56x45mm. NATO (the round used by the US M16 rifle and its civilian AR-15 clones, as well as by weapons such as Kel-Tec's SU-16 or Ruger's Mini-14).  Regrettably, if one wants premium defensive ammunition (i.e. hollow-point or expanding rounds as opposed to standard FMJ or hardball fodder) in any common caliber, the good stuff is still very hard to come by, and very expensive compared to what it used to cost.

Some time ago, I standardized on Federal's outstanding Tactical Bonded 62-grain law enforcement load.  Unfortunately, it's very hard almost impossible to find that round in the civilian market right now.  Federal appears to be reserving supplies for law enforcement departments and individual officers.  I still have a few hundred rounds of it, but I get antsy if my 'stash' of ready-use defensive ammo in each primary caliber falls below 500 rounds.  (Yes, I know that sounds like a lot;  but after eighteen years living in a 'hot' conflict environment, believe me, one's standard of what constitutes 'adequate supplies' tends to ramp up drastically!)

So, I set about finding alternatives.  I've long been a fan of the all-copper projectiles produced by Barnes Bullets.  They're typically longer for a given weight than a lead-core jacketed bullet, expand more readily, and penetrate deeper;  and, of course, because they're not made of two or more metals, there's no jacket separation to worry about.  Several manufacturers use Barnes copper bullets in their rounds, among them Cor-Bon, which loads the Barnes bullets in their range of DPX ammunition (standing, I believe, for Deep Penetrating/Expanding).

John Farnam, an instructor with vast experience whose views I respect, speaks very highly of Cor-Bon's 62-grain DPX load in .223 Remington.  On May 30th, 2007, he wrote:

DPX 223 53gr expanded perfectly when fired out of an eleven-inch barrel, penetrating fifteen inches of gelatin. The bullet looked exactly like the one I extracted from a pig I shot in FL last fall. However, when I shot the same round from my XCR, with its sixteen-inch barrel, the bullet expanded so violently, the petals broke off as the bullet was propagated through the media, leaving only a perfect, copper cylinder when the missile finally stopped. Our chronograph showed velocity to be just under 3000 f/s. When I fired 62gr DPX from my XCR, expansion was, once again, perfect, with a velocity of 2800 f/s. I concluded that the DPX bullet can be launched at too great a velocity. Ideal velocity will generate consistent expansion, but still leave the bullet in one piece. In 223, I'm thus switching from the 53gr DPX to the 62gr DPX for my sixteen-inch rifles.

223, 55gr hardball uniformly failed the car-door test, penetrating the first layer of steel, but invariably failing to penetrate the second. Conversely, DPX 223, in both bullet weights, went through both steel layers and still penetrated twelve inches of gelatin, every time.


Accordingly, I set about finding some 62gr DPX for myself.

Occasionally one gets lucky, and finds a supplier who's either got what one wants, or can locate it, and is willing to sell it at reasonable prices.  I count myself fortunate to have come into contact with Steve Camp of Ravelin Group.  Among their other activities, they're dealers in Cor-Bon ammunition, and Steve offered me a still-expensive, but nevertheless (by today's standards) reasonable deal on a 500-round case of the 62gr. DPX load (considerably better than the manufacturer's list price on their Web site).  It arrived today, as promised. 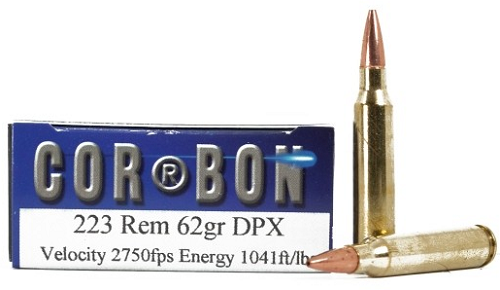 I have the case sitting next to me as I write these words.  It gives me a warm fuzzy to have sufficient high-quality defensive ammo on hand in that caliber once more - particularly since this was paid for not out of household funds, but by selling other ammo I didn't need, plus a firearm that was surplus to requirements.  That's 'recycling' I can fully support!

I have to give a shout-out to Steve Camp and Ravelin Group.  Steve really went the extra mile for me on this one, first by locating the hard-to-find 62gr. DPX load (he didn't have it in stock when I first asked him about it), then by selling me a case at what is, by today's standards, a very reasonable price.  It's still the most expensive 500 rounds of ammo I've ever bought, but that's not Steve's fault!  If you need some of the good stuff, you might want to contact him and ask what Ravelin has in stock.  (No, Steve didn't give me any extra discount, or pay me anything, in return for mentioning him here;  nor will I receive any commission if you buy anything from him.  I just believe in rewarding good service by publicizing it.)

Labels: Business and Commerce, Firearms, Thank You
Email ThisBlogThis!Share to TwitterShare to FacebookShare to Pinterest

5.56 barrels keep getting shorter, bullet weight keeps increasing, and muzzle velocity keeps dropping. Barrel twist keeps getting tighter to stabilize the heavier round, and the higher sectional density bullets punch a nice round hole. So now we have managed to eliminate the original intent, which was to have a small lightly stabilized bullet at very high velocity delivering a violent tumble on impact.
So now we have to go to a soft point bullet, illegal in war, to maintain effectiveness. Hmm.

@Anonymous at 11.30 am: I don't think you're entirely right. Sure, the technology of the rifles and ammunition has changed: but their performance has also improved. Early M16's were notorious for malfunctioning at the drop of a hat; today's M4 carbines are as reliable as any other battle rifle. The early 55-grain projectile tumbled, sure, but it wasn't the world's most accurate, by a long shot (you should pardon the expression). Today's 62-grain standard projectile is far more accurate, and the heavier 75- and 77-grain special forces rounds are so accurate they've claimed all the records formerly held by the M1 Garand and M14 out to 600 yards.

So, yes, the 'tumbling bullet' feature is no longer there; but there are many others to compensate. As for the round being ineffective, well, yes - if you compare it to a .30-caliber round almost three times as heavy, shot for shot, it's not as effective; but neither was the earlier 55-grain projectile. That's one of the prices that has to be paid for a round that allows the average grunt to carry three times as much ammo.

I'd much prefer a more effective round in a lightweight rifle - the 6.8mm. SPC comes to mind at once. However, it's not freely available, and resupply in an emergency is likely to be impossible, to put it mildly! On the other hand, I can probably resupply with some form of 5.56mm. without too much trouble, even if only in the form of 'battlefield pickup'. There are advantages to a round being ubiquitous!