I'm intrigued to read about a claim by an English professor that he's decoded at least some of the words and figures in the Voynich Manuscript.  (If you don't know much about it, the Boston Globe has a very good background article with lots of information.) 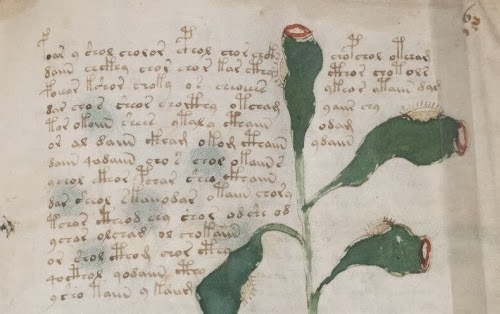 As Extreme Tech points out:

Through carbon dating, the Voynich Manuscript — named after book dealer Wilfrid Voynich who purchased it in 1912 — was found to have been created sometime in the early 1400s, and possibly created in Northern Italy during the Italian Renaissance. The manuscript has never been even slightly decoded — the individual words, the sentence formation, or even the diagrams of stars and plants that are found throughout — have not been solidly identified. There have been so many unproven hypotheses put forth over the years that it’s widely considered that the manuscript was intentionally created as a (very) well-made hoax. Professional and amateur cryptographers haven’t come close in making a breakthrough, and that includes World War I and II codebreakers. However, linguistics professor Stephen Bax announced that he has finally made a breakthrough in deciphering the text, by focusing on identifying proper names.

Bax explains that his potential breakthrough involved identifying proper nouns — namely through identifying the plants and stars depicted in illustrations found throughout the text — the way similar strategies have been used to identify Egyptian hieroglyphs. From there, Bax used the proper nouns as something of a legend for deciphering other characters. Among the notable terms deciphered, the constellation Taurus was discovered, what appeared to be the seven-star cluster Pleiades was identified, as well as the word “Kantairon,” which appeared to be used to identify the medieval herb centaury.

Bax has not stated that he has solved the 600-year-old mystery, but rather, he is reporting his findings in order to compel other linguists and cryptologists to join in and help decode the text using what might very well be the first-ever real breakthrough regarding the Voynich Manuscript.


There's more at the link.  You can also view a three-quarter-hour video on YouTube by Prof. Bax discussing his theories.

It'll be interesting to see whether Prof. Bax's research can be pursued, and the manuscript ultimately decoded.  I'm not anticipating that it'll contain anything earthshakingly important, but it'll be nice to put a six-hundred-year-old mystery behind us.

I saw that several decades ago, maybe it isn't a hoax after all.

While I'd dearly love to see some real progress in decoding/decrypting the VM, I'm afraid there's less than meets the eye to Mr. Bax's interpretation of it. As the linked post details, he's fallen into the all-too-familiar trap of focusing on one little bit of the manuscript, making some subjective interpretations, and then torturing the rest of the VM to make it fit.

Hm. Surely carbon dating only tells when the tree died, and not when it was turned into paper and written on...? So, if you make a batch of paper, by traditional methods, from timber from an old building, it's a good start on an "ancient" manuscript.

Eric,
The VMS is written on vellum, not paper, so its carbon date is probably relatively accurate.

Ah. Yes, fake-old vellum would be harder to do. Pretty much impossible in practice?
And so I save my inspiration for the day that I want to fake a Gutenberg Playboy calendar (as seen on Pinky and the Brain).

This is a joke, right.
That people, scholars, experts, (I use the term loosely), and whatever other ín formed' individuals speculate about this, one point remains.
Nothing has been revealed that sheds light.
It's a very good joke.