Tired thoughts on the new book


It's been a hectic weekend of formatting and last-minute checking before my new book is published on Amazon.com later this week.  It'll mark the end of a long, challenging and sometimes frustrating learning curve - which will immediately begin all over again, at a higher level, for the next book! 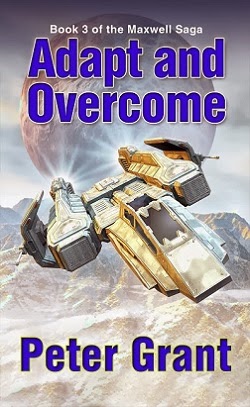 When I sent 'Adapt And Overcome' to beta readers three months ago, I was fairly certain that I had a good story, but I wasn't entirely sure whether my character development was all it could be.  I'd noted comments on Amazon by readers of the first two books in the Maxwell series (I mentioned some of them last weekend in a guest post on Sarah Hoyt's blog), and I'd tried to address issues they raised in the new book, but I was too close to it to be able to look at it objectively.  My beta readers did that for me.  Some liked it pretty much as it was, but others found a great deal that needed improvement.  One in particular sent a very long critique that was invaluable in its level of detail and depth of analysis.

I accordingly decided to postpone publication (which I'd initially intended for the first half of December) until I'd been able to address these issues, and 'raise my game' to a new level.  Early in December I sat down and made detailed notes drawn from Amazon.com reviews, beta reader analysis, and every other source I could think of.  They totaled about 20 pages of things that needed to be addressed.  (A lot of them were single issues that recurred in numerous parts of the book, so that one problem might take two pages of notes to address as I listed every page that needed attention.)

That exercise produced a short list of issues and problems where I needed to do better.  I spent several weeks studying those subjects (I mentioned a couple of useful books in my guest post).  I didn't necessarily agree with all I read, but they gave me good ideas on how to improve in areas where my work appeared to be lacking.  I also used them as a frame of reference to reverse-analyze the critiques from beta readers.  Some criticisms were voiced by only a few;  others by most of the group.  I had to decide which were matters of individual taste, and which reflected real issues I needed to address.  This helped to further refine and whittle down my 20-page 'to do' list.

Finally, at the beginning of January, I sat down and started revising my manuscript.  It took me all month.  It was a bit like pulling teeth sometimes . . . cherished scenes and vignettes had to be ruthlessly discarded, or amended, or even carved up and redistributed to other parts of the book.  I added a couple of new scenes, too.  I think the exercise has been worth it.  I've certainly learned a lot in the process, and I daresay the book is very much better for the extra effort - certainly considerably improved in terms of character development, etc. compared to the first two Maxwell books.  All this hard work will also help me to make subsequent books in the series that much better.

Today I began the final formatting process.  It's a lot easier since I switched to using Microsoft Word, which is the default software and document format used by Amazon.com and other e-publishers for their source documents.  I found an infuriating niggle today.  If one compiles a manual table of contents (TOC), hot-linked to each chapter by bookmarks, it works in MS Word's DOCX format.  However, converting the DOCX file directly to Amazon Kindle's MOBI format did not produce a working, hot-linked TOC - only a list of chapter names that wasn't hot-linked.  Frustrated, I tried using Calibre to convert the DOCX file to an EPUB format e-reader file, and found that the TOC worked fine.  When I then converted that EPUB file to MOBI, it still worked.  Why didn't it work on the single-pass conversion, but did work on the three-cornered format change?  I have no idea!  Technology!  AAARGH!

I'm looking forward to getting this book out there.  I think it's my best work yet.  Now to see whether you agree!  Watch this blog for a publication announcement and link to the book later this week.

Labels: Books, Idle chatter, Me me me, Writing
Email ThisBlogThis!Share to TwitterShare to FacebookShare to Pinterest

Yea!!! Looking forward to the read Peter, and congrats!!!

I'm betting the extra effort really pays off, so here's thanking you in advance. Can't wait!

Eagerly awaiting the new book! Just wish I didn't have to buy it in Kindle and do the conversion to epub myself. Makes the wait that many minutes longer.

Jon - working on it! By book 4, I'm hoping we'll be available at all major and several minor ebook retailers.

Have you looked into creating an author page on smashwords.com ? they have several formats when downloading a purchase