Dogs go to war - by parachute


Der Spiegel has a very interesting article about a British parachute regiment during World War II that trained dogs to parachute into action alongside its soldiers.  It calls them 'Britain's Luftwoofe'.

During World War II, the 13th (Lancashire) Parachute Battalion started an adventurous experiment as it prepared for D-Day: enlisting dogs into their ranks. The so-called "paradogs" (short for "parachuting dogs") were specifically trained to perform tasks such as locating mines, keeping watch and warning about enemies. As a side job, they also served as something of a mascot for the two-legged troops.

Training began with getting the dogs used to loud noises. At the base in Larkhill Garrison, the dog handlers had the dogs sit for hours on transport aircraft with their propellers spinning. They also trained the dogs to identify the smell of explosives and gunpowder in addition to familiarizing them with possible battlefield scenarios, such as what to do if their master was captured, how to track down enemy soldiers and how to behave during firefights.

Training on the ground lasted roughly two months. But then the dogs started what wasn't part of the training of the other search dogs in the war: parachuting maneuvers.

The dogs' slim bodies proved to be advantageous because, during their test jumps, they could use the parachutes that had actually been designed to carry bicycles. In order to make it easier to get the dogs to jump out of the aircraft, they weren't given anything to drink or eat beforehand. On April 2, 1944, Bailey wrote in his notebook about the first jump with the female Alsatian Ranee. He notes that he carried with him a 2-pound piece of meat, and that the dog sat at his heels eagerly watching as the men at the front of the line jumped out of the plane.

Then it was their time to jump, which Bailey describes in this way:

"After my chute developed, I turned to face the line of flight; the dog was 30 yards away and slightly above. The chute had opened and was oscillating slightly. (Ranee) looked somewhat bewildered but showed no sign of fear. I called out and she immediately turned in my direction and wagged her tail vigorously. The dog touched down 80 feet before I landed. She was completely relaxed, making no attempt to anticipate or resist the landing, rolled over once, scrambled to her feet and stood looking round. I landed 40 feet from her and immediately ran to her, released her and gave her the feed."

Jump, land, eat: With each training jump, the dogs started enjoying their job more. In fact, the dogs sometimes allowed themselves to be thrown out of the planes or leapt out without any coaxing.

In what followed, as one soldier in the 13th Battalion later noted, Bing and the other dogs proved to be very useful, especially for locating mines and booby traps. "They would sniff excitedly over it for a few seconds and then sit down looking back at the handler with a quaint mixture of smugness and expectancy," he wrote, noting that the dogs would then be rewarded with a treat. "The dogs also helped on patrols by sniffing out enemy positions and personnel, hence saving many Allied lives," he added.


There's more at the link.  There's also an interesting photo gallery, including this picture of what may have been one of the first dogs to 'jump' (or be thrown) from a plane by parachute. 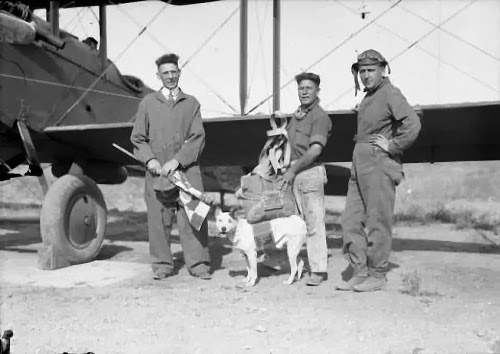 No one can say for sure who the first dog to parachute was. This undated photo (most likely from between 1920 and 1924) shows members of the Colorado Air National Guard with dog Jeff, wearing his parachute. After making several successful jumps, he was killed in August 1924, when his chute failed to open.

There are more pictures at the link.  Interesting stuff.

The article was inspired by an amateur history of the 13th (Lancashire) Parachute Battalion during World War II.  It's apparently well-written enough that it attracted interest all the way into Germany.  I wonder how many stories like that remain untold, those who could have told them now lost to us through the passage of time?