A tragedy, a death, and a plea for help


Two fellow bloggers could really use your prayers and support right now - and your financial help, if you can afford it.

Sabra, wife of Erik Onstott, became pregnant some months ago, and they were looking forward to the birth of their next child.  Tragically, they learned that the baby suffered from limb-body wall complex (LBWC), an unsurvivable genetic defect. The child could not live outside the womb.  Sabra described the shock of the discovery here, and Erik wrote about it here.  It's heartbreaking to read their articles, but they're a vivid testimony of faith in the face of unbearable news.

With what I can only describe as heroic courage, bolstered by their strong Christian faith, Eric and Sabra decided to carry the child to term and give it all the love they could in the short time it would live.  Not being able to tell whether it was a boy or a girl (due to the extent of its deformity), they decided to name it Psalm-Angel Guadalupe.

The child was born last Wednesday, and lived for only an hour and a half.  During that time they gave him/her all the love that they could, and entrusted his/her life to the Creator when it was over.  Erik posted a number of pictures on his blog.  I hope he won't mind if I re-post this one. 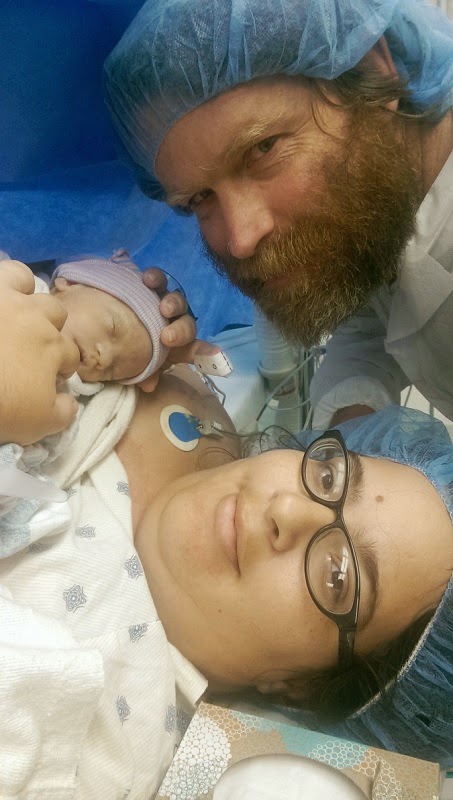 I mourn with them for their loss, and pray that they may find comfort in their faith.  If you'd like to leave a message of support on Erik's blog post, I'm sure they'd appreciate it.

Even more than verbal, moral or spiritual support, they could use a little material support right now.  During the pregnancy they were forced to move out of their rented home, and they've had further troubles since then.  There are also the expenses of giving birth, interrupting their work, and so on.  Friends have set up a YouCaring donation page for them, which gives more details of their needs.  As of this morning it was still several thousand dollars below the initial fundraising target of $7,500 (which was determined some time ago, and may by now be inadequate).

If you're able to contribute, I'm sure they'd be very grateful for your financial support.  Miss D. and I have done so, and we'd like to ask all our readers, and all our fellow bloggers, to consider donating whatever you can to help them.  Thanks to everyone, and God's blessings to Erik and Sabra.

May Psalm-Angel Guadalupe, through the mercy of God, rest in peace.

Labels: Faith and life, Health, Human interest, Other blogs, Thank You, Tragedy
Email ThisBlogThis!Share to TwitterShare to FacebookShare to Pinterest

Thank you, Peter. And yes, it is perfectly okay that you publish that picture. :D

Donation away and prayers in the wind.

Having read her blog often years ago I regret I was not up to speed on the latest developments. Thanks Peter for bringing it back to my attention.

I had donated but have added their fundraiser to my entire Google Circle to get the word out. There's no one on my blog that hasn't already seen it here, but my Google Circles includes a lot of folks that are not in the blogging community. They will be in my prayers as the message is spread.

May God help and sustain them.

Prayers for the parents

Prayers from the GunDiva family.