Jobs for the boys - a 'brothel investigator'


I was amazed to read that Sydney, Australia has what must be one of the most unusual - and sought-after - jobs in the world. 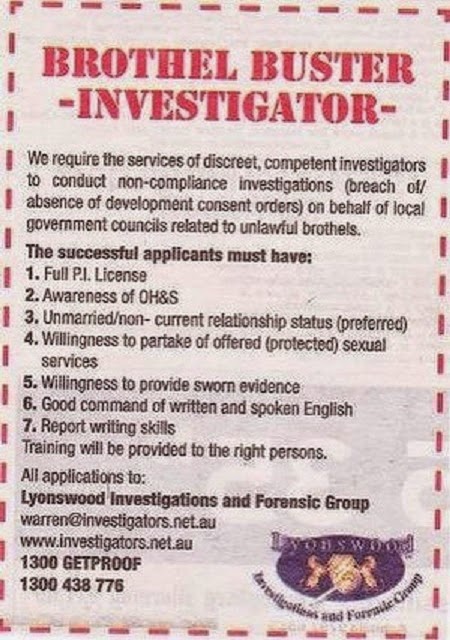 Today, he is a gun for hire, having received tens of thousands of dollars from Sydney's metropolitan councils in exchange for crucial evidence that is presented in court to help expose and close underground parlours. In short, Mr Allen has paid sex with prostitutes and ratepayers foot the bill.

"Never in a million years would I have imagined a job like this existed, let alone me doing it," the 60-year-old said, with a hint of a smirk. "It's a strange world for sure."

Mr Allen's maiden mission involved an undercover visit to an unlicensed brothel reportedly masquerading as a massage clinic. "I had never been to a brothel in my life so I was feeling quite nervous and apprehensive," he recalled.

"I didn't know what to expect. I reminded myself that this was a legal job exposing illegal activities. As far as first days at work go, I enjoyed myself."

Mr Allen confirmed he had completed more than 60 jobs at various locations across Sydney. In nearly every case, the establishments were "clean and comfortable" environments staffed almost exclusively by Asian girls who were in Australia to "study English". Sexual services were given in all but three of the businesses he has visited, he said.

"The jobs flow in, on average, once every three weeks. If it spreads out that way, it's perfect," he said.

"But there are occasions when they all arrive at once. For instance, I was given three jobs to complete, for the same council, in the same week ... and I'm not as young as I used to be."


There's more at the link.  You can read more about his job here.

I wonder how Sydney ratepayers feel when they realize that their money is paying for an investigator to have sex with prostitutes?  I imagine the council could instead call for unpaid volunteers from among the ratepayers.  I daresay it'd be overwhelmed with the response!  Alternatively, we could get Mike Rowe to investigate it as an extension of his 'Dirty Jobs' series . . .

The same ahem job benefit was legal for Honolulu police, until recently when the law was changed. Of course, the police union protested vigorously. :)

LOL, I wonder if he goes home and complains about how HARD a day at work he had...

Mike Rowe would most likely "enjoy" that work much more than the show where he was an inseminator for turkeys, I'm thinking. ;)

Why are we not surprised.
'Fred Allen' is only being paid with public money to do what we are forced to pay Australian politicians to do to our country.

Brothel Inspector is a real job here in Nevada. It's part of the health department.