A former US Navy pilot had a close call last week.

In a lucky twist of fate, no one was hurt Thursday afternoon after the pilot of a single-engine, jet fighter-style airplane clipped a cable spanning the Colorado River, lost a piece of a wing on Interstate 70 and sent the cable wire smashing into vehicles traveling the highway.

Witnesses reported the wire acted like a whip, taking out several windshields on vehicles and causing damages, including damages to a semitrailer.

The pilot, who had taken off in a Aero L39C from the Grand Junction Regional Airport, returned to make an emergency landing on the runway about 2 p.m., according to an official with the Federal Aviation Administration.

Several vehicles were stopped along the roadway with smashed windshields and other damages.

Traffic was limited to one lane in each direction for hours on I-70 as emergency workers attempted to clear the highway and respond to the scene of multiple damaged vehicles.

Witnesses of the plane upon landing could see clear damage to the tail section and wing tip of the aircraft, which the maker describes as a combat training plane. 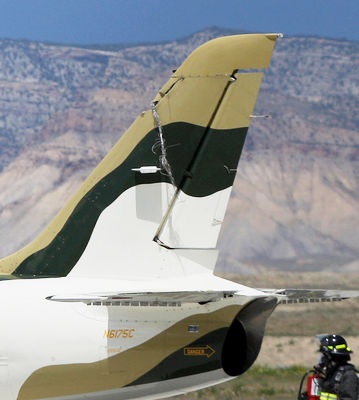 The pilot’s name was not released Thursday, but Trooper Dan Chermok of the Colorado State Patrol wrote on social media that the pilot is a former F-18 pilot.


There's more at the link, including several more photographs that make interesting viewing.

A lucky escape for both the pilot and the drivers of the vehicles hit by the whiplashing cable on I-70.  The article has a picture of one with its windscreen smashed from side to side.  I'm glad no-one was hurt.

There are a number of L39 jets in private hands in the USA, and some companies offer flights in them.  There are many videos of them on YouTube.

Labels: Accidents, Aircraft, Boys and their toys, Oops
Email ThisBlogThis!Share to TwitterShare to FacebookShare to Pinterest

The aircraft is described as a "Learjet" and as "experimental" in the image captions...

@m4: Yep - some journalists don't know what they're talking about, I'm afraid.

Shoot, that's my hometown. I think it's time to phone home and see if any of my family was present.

As for the paper getting the captions wrong, there's a reason why locals refer to that particular paper as the "Daily Senile".

Whew... One lucky pilot there! Normally hitting a cable is a death sentence...

Witnesses say he was "flying low" over the Colorado River when he struck the power line. He then made an emergency landing because of the damage to his aircraft.

Looking at a map of the Grand Junction area and the area where I70 and the river are adjacent to each other(and several miles from the airport) indicates - to me - this pilot was far too low, was not making an approach run since the river and airport are roughly parallel to each other and about the same altitude.

The pilot was joy-riding, created his own emergency, and is lucky as hell he even survived. He should be grounded.

was he below VFR minimums for this area?
was the cable included on the aero maps?
did he have the latest issue of the maps?

there is a reason why i ask that ..