I didn't know robots went back that far


It seems a robot designed and built during the 1920's is about to be resurrected.  The Telegraph reports:

Britain’s first robot, Eric, is to be rebuilt and sent on a world tour after curators at the Science Museum tracked down lost plans while researching a new exhibition.

The automaton was built by First World Ward veteran Captain William Richards and aircraft engineer Alan Reffell, to replace the Duke of York in opening the Exhibition of the Society of Model Engineers in London in 1928.

On September 28 1928 Eric stood up at the Royal Horticultural Hall, bowed, looked right and left and moved his hands as he proceeded to give a four minute opening address as sparks flashed from his teeth. 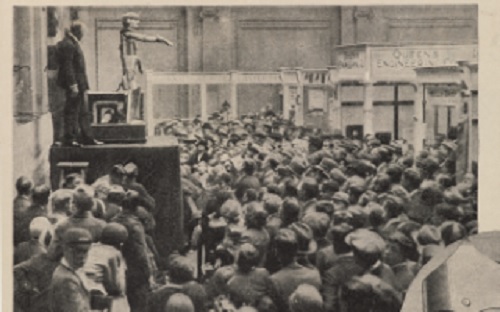 The robot was so successful that after his appearance he embarked on a world tour, amazing crowds in Britain, UK and Europe, before vanishing forever.

I'm not sure whether Eric could be described in the same terms as a modern robot.  I suspect he'd more correctly be classified as an automaton.  Whatever the classification, though, it's very cool from a techie perspective to see a piece of history like this revived.  I imagine the steampunk brigade will be thrilled!

Why does the phrase what's old is new again keep coming to mind? That will be interesting!

Fools! Surely he was destroyed and the plans buried for good reason! Won't anyone think of the unintended consequences of bringing such a thing back from the grave? Will the scientists never stop and think?

*I kid, but you know someone is thinking it. Hmm... Could almost spark a story there...

There are many examples that are much older.

I think it's interesting that 'Eric' has a shield on his chest emblazoned with the letters "RUR".
Peter, you should appreciate that that is a reference to the 1920 play "Rossum's Universal Robots" by Karl Capek. That play was one of the first true works of science fiction, and introduced the word 'robot' to the language (from the Czech 'robota').
Obviously, someone in the Society of Model Engineers was a fan!!