My first Western is published


My first (and hopefully by no means my last) Western, 'Brings The Lightning', has just been published by Castalia House. 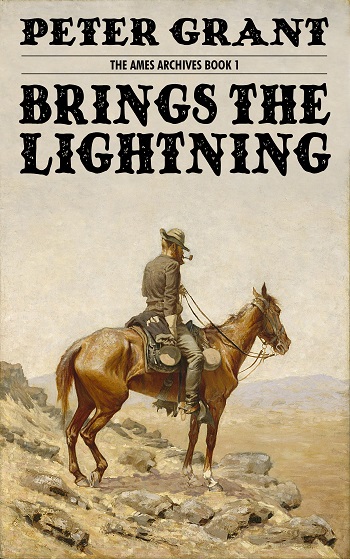 It's been a labor of love for me, because I grew up on a steady diet of what I'd call 'classic' Westerns;  Louis L'Amour, Zane Grey, the 'English Westerns' of J. T. Edson, and the like.  In military camps across Southern Africa, paperback copies of their books were in circulation.  One sometimes had to wait to get hold of two or three copies in order to finish the story, because missing pages at the beginning and end could make the books a little impenetrable;  but one knew there'd be more copies floating around at the next base.

I particularly strove for accuracy and historical authenticity.  I've gotten very tired of reading (and watching) Westerns where the weapons, or the food, or the wagons, or the clothes, weren't period-correct.  The real thing was fascinating;  the impact of the Industrial Revolution on so many areas of life was still making itself felt, so that from generation to generation, lives would be lived very differently.  I was able to take my time while writing it, assemble a fairly decent reference bookshelf or three, and make sure that what I wrote was as accurate as I could make it.  (I may have gone a bit too far in that direction for some readers, judging by early reviews, but it doesn't seem to have stopped them enjoying it.  So far, as I write these words, the book's already garnered four 4-star and six 5-star reviews.  That makes me very happy!)

The initial release is an e-book.  A print edition will follow within weeks, as Castalia House gears up for it;  and there may be some special news on that front, too.  (Later on today I'll put up an article about how I ended up at Castalia House with this book, and offering some thoughts on my experience working with them.  It's been a lot of fun.  You can read their perspective on that here.)

I hope you enjoy reading 'Brings The Lightning' as much as I've enjoyed writing it.  The sequel is already under way, to be published (hopefully) about this time next year.

Labels: Books, Business and Commerce, History, Me me me, Thank You, Warm Fuzzy Happy Stuff
Email ThisBlogThis!Share to TwitterShare to FacebookShare to Pinterest

I'll be picking up the print version as soon as it's out.

This is great!! Any chance you can post a large pic of the cover?

I will look on Amazon for it :)

Snagged a copy for my Kindle and will read it once I'm finished with what I'm currently reading. Authenticity is a good thing and I have no trouble with you trying to keep it as much so as possible. Hollywood was notroious for poor costuming and weapon selection in the 50s. There were some terrific films made then with anachronistic equipment. I recall seeing a Gary Cooper film set during the Seminole War of the 1830s. Coop was a packing a Peacemaker and some of the Seminoles had Trapdoor Springfields. They do better now, thanks to people like Pete Sherayko.

Purchased! Looking forward to it!

Congratulations! Enjoyed the excerpt you posted and will buy a copy.

I will pick this up.

One set of my grandparents had shelves of Zane Grey and Louis L'Amour books, alongside a Bible and Fox Fires.

Best of luck with this trilogy :P

Congratulations on your most recent publication! I'm not into sci-fi, but I'll try to scratch up the funds to get this western when I can.

Congratulations! Just got it; looking forward to reading it.

Bought, I am looking forward to reading this. It only seems a few weeks since you posted the sample which is quite amazing.

Grabbed it and am well into the start.
Went and looked at what Vox had to say.
Not very happy about his remark about gun nuts or his disparagement of Louis L'Amour's writing style.
Someone obviously failed to bring to his attention that L'Amour doesn't read like modern work is that most of it was written in the '30s and '40s.
Congratulations on the new book, and if it all reads like the first few pages you have a winner.
But Vox Day is still a jerk in my book.

Picking this up along with bonus book offered by yourself and Castalia. You reference a sequel and Vox mentioned a series. I'm curious if your storyline involves a particular number of volumes or see what happens after two or three volumes? I read the excerpt a couple months ago and am looking forward to continuing the story.

Your reading comprehension is lacking. The gun nut comment was Vox quoting one of the Amazon reviews. The comment was also not all disparaging but an alert to the gun aficionados at Vox's blog; of which there are many, that Peter had done his homework.

Also Vox clearly stated he is more a fan of Louis L'Amour than he is a fan of the western genre.

Congratulations Peter!
I will be getting a copy soon, definitely want a print version as well.
I wish you all the success in the world.

Congratulations! There is a shortage of westerns to read, may you fill that void.

Actually, as long as its well written, I'm sure I'll enjoy it.

Nabbed early this morning, and I'll be moving it to the top of my TBR stack. The excerpt certainly painted a vivid picture of the time period, and this cover adds to the atmosphere. Thanks to your excerpt, I snagged a discounted Louis L'Amour, and will begin investigating the classic westerns.

/headdesk. Read what Dave wrote. Vox has his issues (as do we all) but being anti-gun is most assuredly not one of them.