I'm getting fed up with fantastical claims by pseudo-scientists who offer only models and extrapolations to support them, rather than actual, verifiable, repeatable numbers.  The latest comes from a study of the number of life forms on Earth.

Humans have been living on Earth for a very long time, and yet, we almost know nothing about other living organisms that inhabit our planet. A new study suggests that Earth may be holding nearly 1 trillion species of organisms, but only one-thousandth of 1 percent of those organisms is identified, which means that 99.99 percent of all life forms are yet to be discovered.

The result is considered to be the largest compilation of its kind representing over 5.6 million microscopic and non-microscopic species from 35,000 locations across all the world's oceans and continents, except Antarctica.

Researchers also discovered that the scaling law, which is used to accurately predict species numbers for plant and animal communities can also be applied to microbes, making it easier for the researchers to safely predict the total number of microbe species on the planet.

This strikes me as resembling the claims of probiotic vendors about their products.  Here are three examples from a field stuffed with them.  Note the ringed numbers. 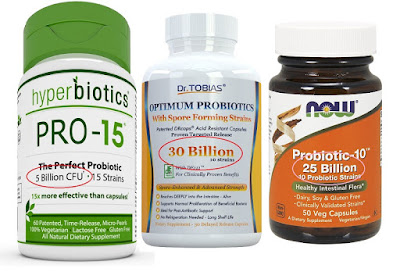 Those figures are claimed to be the number of probiotic microorganisms contained in each dose of the product.  My immediate question is:  Who counted them?  Clearly, that's impossible to accomplish physically.  No-one sat down, drew them up in a straight line, and started counting, "One, two, three..." until they reached a total in the billions.  The numbers must have been obtained by extrapolation from something - but what?  We aren't told.  Did someone count how many bacteria could fit into the volume occupied by the head of a pin, calculate how many pinheads could fit into one of the product capsules, multiply the results together, and hey presto! - another advertising claim?  For all we know, that may well be how the numbers above were obtained.  Frankly, I don't believe any of them.

The same question applies to this study of life forms.  Who or what says there are - or may be - a trillion of them on Earth?  It's impossible to know that on the basis of any experimentally derived, verifiable evidence.  It's another extrapolation.  For all the scientific language used in the report, it's nothing more or less than educated guesswork.  In the old days we used to call that a SWAG - a "scientific wild-assed guess".  I guess the term still applies, even though the researchers involved would probably resent it being applied to their results.  SWAG's do, indeed, have their place, and intuition is a powerful force among educated professionals - but let's make it clear that's what's happening, not publish a research report making a claim that's empirically unverifiable.

I also object vehemently to SWAG's being used to motivate promote extort funding for individuals and institutions.  "Look at these results!  They prove how important is the research we conduct!  Give us more money for more research and more researchers!"  Sorry.  Let's deal with real numbers and verifiable, repeatable results, not models or guesswork.  The latter is what's given rise to the climate change controversy - and that's the biggest scam in history, financially speaking.

As someone who's actually done the counting of colonies on a plate, testing food to ensure it's safe for human consumption, it's so reassuring that the public thinks I spent a year of my life working 12 hour shifts of arbitrary guesswork...

So how do we measure this stuff? We take a sample, prepare it with a solution that aims to recover the maximum number of colonies while also diluting the sample to a specific dilution. We spread that over an agar plate and incubate it. After the specific time period, we count the number of colonies on the plate. That gives us the number of colony-forming units per gram in that sample. As it's diluted we then multiply by the dilution to get cfu/g for the original sample. These guys might do things a little differently but the theory is thee same. Because it's impossible to count billions (not to mention you'd need a very large plate - a standard microbiology dish is only useful to about 150-300 colonies), we have to count a smaller sample and extrapolate.

I don't know why you're so upset about extrapolation, seeing as everything is based on it. Why? If you don't extrapolate from one experiment to everything else, you have to test every instance of that thing. This is how science works.

Not saying these probiotic things actually work, most of that shit is money-grabbing BS.

As for that estimate... It seems a little high, but considering almost all of that is going to be microbes, it's not impossible. They say they've studied how microorganisms interact and extrapolated from that, seeing as all microbiology is done that way I don't see why that's automatically a reason to doubt it. Perhaps you should give up modern medicine?

I loathe pseudoscience, I really do. But m4 is correct. The science behind estimating colony forming units is well established and sound - it's the same method we use in the clinical laboratory to determine an estimate of how many bacteria are infecting urine or tissue. Which is useful in determining if an infection is improving or not and if it is really an infection or a contaminate in the sample. Where the pseudoscience comes in is the health claims made by the company. Nobody actually knows the best or most healthy composition of the human gut microbiome, and how it actually effects other systems in the body. We can make some guesses and have some ideas, but it's really early in the field to make sweeping claims. And there's no guarantee that the colony forming units in that bottle that's been sitting at room temp for 6 months are actually still alive. Which is about what I would say for the article you linked. Their extrapolation is probably less reliable, and even if it wasn't what does it actually mean? Not a lot at this point.

The scaling law is well established in Biology. Here is a pdf that explains s it pretty well.

The first one, on estimating the number of bacteria, is well covered.

As another example, if you go buy a thousand nuts or screws, do you think someone sits and counts them? They do it by weight. If five screws weigh X, it's easy to figure what a thousand should weigh.

As for the climate mess, that's a whole 'nother pile of stuff. Too much adjustment of raw data (as your dad probably told you, "don't play with that"), refusal to accept data that doesn't fit rather than think the model may be wrong, and just generally God-awful sloppiness. I feel bad for people really trying to do science in that field.

Two different types of extrapolation, one counts numbers of the same set by sample count and scaling the other posits unknown sets to discover. There might be that many different organisms on earth but the volume of a known medium is not the same thing as the possible number of different environmental niches in that volume. One counts oranges the other counts possible varieties of fruit.

...what everyone else said. You're doing an excellent job of demonstrating that you don't know much about microbiology and you don't like things you don't understand, but not much else. This is like watching the Brady bunch talk about shoulder things that go up...

You seem so be psycho-allergic to myopic ideologies.
I'll bet advertisers get frustrated with you. "Incajolable".

Well I don't know much about counting colonies and some of the earlier comments are... weird (insulting?). So let me be the first to deviate from the previous comments and say, simply, that's why I make my own!

Sauerkraut and pickles are honestly pretty easy to make. They have been shown to anti-cancerous properties (I'm sure that's not the right word, but you get the point) and lacto-fermenting food allows your body to assimilate a lot more of the nutrients than you otherwise would. I personally think we'd all be a little healthier if we all at a little bit with every meal... but it does take effort to make it and the real (live cultures) stuff isn't cheap! I'd sell it, but I need a commercial kitchen to make it in... and those aren't free!