A blast from my military past - South African mine detection vehicles


I was amused to read this morning that a South African mine-detection system is to be sold (using US funds) to Egypt, Jordan and Saudi Arabia.  The Husky (shown below) is already in use in Iraq and Afghanistan with US and allied forces. 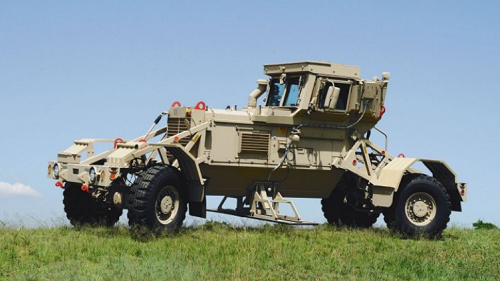 The reason for my amusement is that I recall the very beginnings of these systems, back in the 1970's.  The first was invented in what was then Rhodesia (today Zimbabwe), and was called the 'Pookie', after a common nickname for the galago, a small bushbaby. 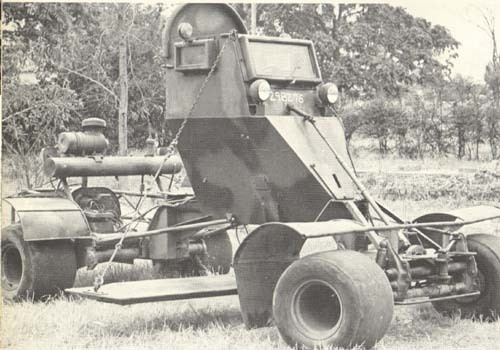 You can read all about the development of the Pookie here.  It's a fascinating story, and shows what can be done in a country without much of an industrial base by application of ingenuity and hard work.  I drove behind Pookies in convoys through Rhodesia on several occasions, and watched them detect Soviet TM-46 landmines planted in dirt roads.  They were amazing to us back then, in the early days of mine-detecting vehicles.

One of the more amusing aspects of the Pookie was its tires.  The designers needed to minimize the vehicle's ground pressure, in order to avoid detonating mines over which it might drive;  so they came up with the idea of buying all the old, discarded tires left behind by international racing teams after the annual South African Grand Prix Formula 1 race.  They were bought up for pennies on the dollar, and trucked to Rhodesia for use on Pookies.  They lowered the ground pressure to less than three pounds per square inch, so low that it would not set off even anti-personnel mines, and were a great success.

South Africa continued the development of mine detection technology after Rhodesia collapsed.  The Pookie could originally detect only metallic mines, not plastic or wood ones;  so an engineer came up with a brilliant idea.  If you can't detect the mine, why not look for the hole dug to receive it?  Ground penetrating radar could reveal disturbed earth, even if nothing was visible to the naked eye.  Sensors were soon designed and incorporated into a new range of vehicles.

The first vehicle designed in South Africa for this purpose was named the 'Gees' (Afrikaans for 'spirit' or 'ghost'). 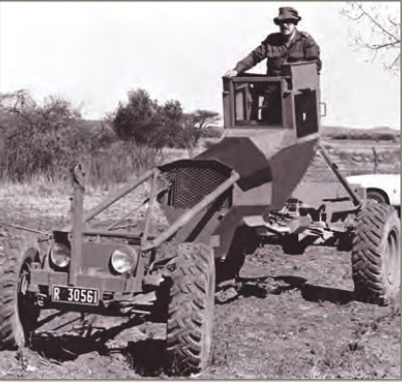 It's clearly similar to the Rhodesian Pookie in its overall design, although it didn't use low-pressure tires.  It wasn't very successful, but it was only a start. It would be succeeded by many more advanced models.

The first with which I had personal experience was the 'Spinnekop' ('Spider'), similar in purpose to the original Pookie. 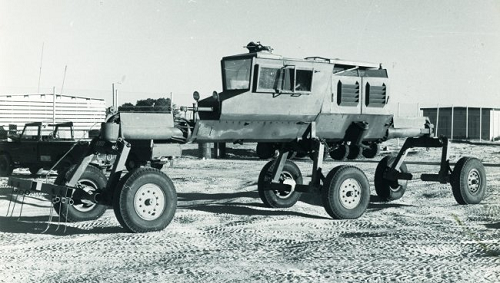 The most effective design, which continues in production to this day (with many technological improvements), incorporated three vehicle types.  The entire system was known as 'Chubby'.  It comprised the Meerkat, a mine detection vehicle, which was followed in convoy by a Husky mine detection and detonation vehicle, towing a series of trailers known as the Duisendpoot (literally, 'Thousand Feet', an Afrikaans nickname for a millipede).  The Duisendpoot trailers rolled heavy wheels over the entire width of the vehicle's path, and would detonate any mine not detected by the Meerkat.  They could be quickly and easily repaired after an explosion, and put back into service.  They could be towed by many different vehicles, including the Spinnekop.

Here's an early picture of the Meerkat, Husky and Duisendpoot vehicles together - click it for a larger view.

The system went through several iterations as it was improved in service.  In its most modern version, the Meerkat has been dispensed with, and multiple Husky vehicles are used instead.

Another interesting and very odd-looking vehicle was the so-called 'Hottentotsgot', an Afrikaans word meaning literally 'Hottentot's God', a colloquial name for a mantis. 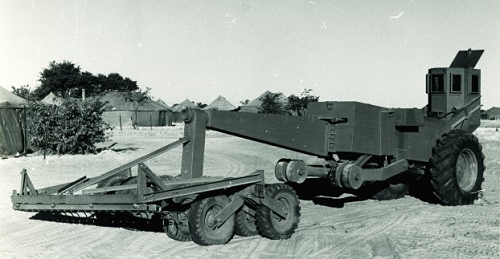 This was designed to find landmines and detonate them by the simple expedient of driving over them.  Needless to say, it wasn't a popular assignment for their drivers, despite having mine-protected cabs, and was soon supplanted by the more effective and efficient Chubby system.

I had some involvement with the electronic systems used on some of these vehicles.  It's fascinating to see that some of those I worked on, back in the 1980's, are still in action (in much updated versions) in the fight against terrorism and landmines today.

The Gees was actually named the "Spook" in Afrikaans.

I used to remember reading SOF magazine in the early 80's and they liked to talk about the conflict that transpired in Rhodesia and South Africa and they liked to feature the Anti mine vehicles that the South African forces used to defeat mines laid by ANC UNITA and some of the other groups. Thanks for the trip down memory lane

The most outrageous thing about these systems is how long it took the US to take them up into service. Not to mention the fact that during the entire Vietnam War, the US Army faced a similar threat to the lines of communications, and did nothing at all along these lines, while a bunch of railway engineers under international sanction showed the way forward...

It astonishes me how the idiots running things missed the continuity in doctrine and operational art between the Soviet Eastern Front partisan operations against the Germans, and what transpired in Korea, Vietnam, and Southern African nations. It's almost like they deliberately ignored the manner in which the Soviets turned the rear areas into battle areas, and utilized the IED and mines as weapons to separate the front-line combat forces from their support elements.

And, oddly enough, we see the same continuity of operational theory and practice in Iraq and Afghanistan. Amazing. It's like someone came up with this doctrine, and deliberately spread it, or something...