Another look at healthcare costs


Last month I noted that the real issue in healthcare reform was neither Obamacare nor Trumpcare - it was the incessantly increasing costs of healthcare to the US economy and taxpayer.  I've since come across an essay by Charles Hugh Smith that provides very informative comparisons.

What does it cost to have a baby delivered in a hospital today? $5,000? $10,000? Who even knows, given the convoluted billing process in today's sickcare system?

The pharmaceutical cartel jacks up medication costs per dose from $3 to $600, even when the medication has been around for decades: the Pinworm prescription jumps from $3 to up to $600 a pill Parents, doctors angry over drug price gouging (via John F.)

Here's a chart that illustrates the breathtaking rise in healthcare costs. Wages are the nearly flat line: 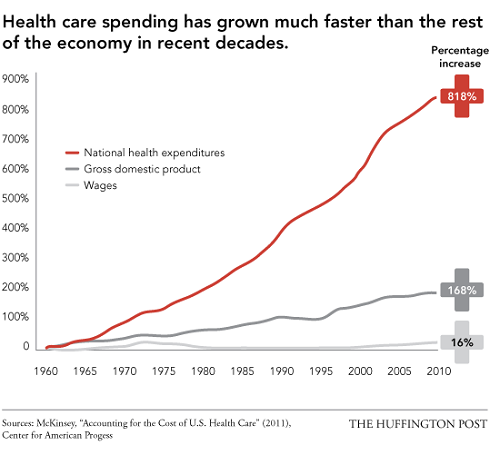 There's more at the link, and in Mr. Smith's regular articles at his blog.  I highly recommend you drop in there from time to time, and read what he has to say.  It's always interesting.

I think Mr. Smith's article reinforces what I said last month.  Unless and until we get healthcare costs under control, it doesn't matter what system of healthcare our politicians inflict on us - it still won't work in the long run.  We'll end up bankrupt, as individuals and as a nation.

I've just decided to quit all meds, as I was on a regimen of six pills a day plus a weekly self-injection of the age-old methotrexate (chemo) for spinal injuries and rheumatoid arthritis. The side effects of the combination were beyond annoying, including the run of digestive tract difficulties, unwanted weight loss, and fatigue/lethargy.
The symptoms were bad enough, but when my rheumatologist prescribed one of the biological, the druggist told me my converted gov health care ($850/month premium now) had a $5,000 annual deductible, plus $150/month co-pay, I informed my docs "I quit."
I'm now managing pain with ibuprofen and as much exercise as I can stand. So far, the digestive symptoms are receding, the pain is slightly worse, and the fatigue seems better. I still find standing or walking without support very painful.
The insane prices for sophisticated meds are, I believe, attributable to greed and waste by the pharma industry.

Just a quick note: sometimes you can get a coupon for reduced cost of meds from the manufacturers web site. I have to take a med that runs 5 figures monthly! By going on the companies web site; I got a coupon and I can get it for $10. BUT, most of those coupons are only good if you have "commercial" insurance. Not Medicaid or medicare.
Steve

I wonder what happened in the mid-60's that could have affected medical costs?

If you look at the costs of other things in society you see the same relation to the generally reported inflation in education.

Why? The same reason. Government money corrupts all. In the case of education, through student loans and other financial aid packages, nobody cares about the price of that seat. There's only a limited number of college seats in the first place, so the infinite checkbook of the government guarantees the price will be bid up to whatever the college asks. "What? You're going to deny an education to this deserving child?!? Hatemonger! Racist!!"

The market for health care is completely broken. If you talk to individual worker; nurses, technicians, even family doctors, they're under tremendous cost pressures. At the top level, it appears no institution is under pressure and the "managers" (the Federal government actively mismanage it. We get things like that idiot Donald Berwick (Obama's first "Medicare Czar" and Obamacare administrator) who actually thought if we reduce the supply of things like MRIs it would reduce the cost. No, doctor, reducing the demand reduces the cost; reducing the supply with constant demand raises the cost.

How can a guy like this, without the slightest knowledge of economics or business get put in charge of of almost $100 Trillion in obligations? You can go through all of the soft sciences (like economics) and of the very few things you'll find that approach the character of physical law, Supply and Demand, is about the closest.

The free market is capable of enormous corrections, but the first and biggest thing we need to do is get their stupid hands off the medical system. Unfortunately, it will take a while for the disruptions to settle out. We either do it now, under some control, or it collapses when the economy collapses.

You can always go back to 1960's era treatments...your costs will plummet, but your health might too.

Seriously, this is an enormously complex issue with injury lawyers, insurance, high dollar (legitimately) treatments never before available, greed, poor regulation, abuse of the system, etc. This Mr. Smith is really not making much of a case...just stating the obvious, that med costs are growing. The devil is in the details...

What a stupid argument. For example, it may have been cheaper for labor and delivery in 1952, but what if you delivered a premature baby? NICUs were not created until 1960.(https://en.wikipedia.org/wiki/Neonatal_intensive_care_unit)

The astounding and near-miraculous innovation during the last 40-50 years in medical services, treatments, and pharma comes with a cost. How many years of average life-expectancy have been added during that time? How many premature babies have lived who otherwise would have died? How many hip and knee replacements have become routine surgeries for 70-80 year olds (who are back playing golf within weeks, if not days?)

I don't doubt that you can obtain a 1952 medical treatment for low cost, but you'd probably have to travel to a third-world country to find it. Go for it.

You might also want to consider how many people pay NOTHING for medical treatment. As well as how much of that treatment is required because of choices THEY made.

What a great post, and I agree completely. Like College costs, anyone who mentions the need for cost control is either ignored or attacked.

Plenty of people are making a killing off of healthcare and pharmaceuticals and it isn't because they're making huge, expensive advances in R&D.

Part of the increase is due to the larger of old people, then in the past but most of it is due to other factors, aka the per-captia cost per patient.

We need cost controls on drugs. My sister takes an asthma inhaler that costs her $75/month. Its nothing more than simple steroids and its been around for 40 years. So why is it so expensive? Easy, some one bought up the patent and now charges what the market will bear. Pure unadulterated greed.

rcocean: Bought up the patent? On something that's been around for 40 years? I don't think so. The actual patent has long since expired.
Unfortunately, the regulators and pharma companies interact in interesting ways that can effectively extend the lifetime of a patent more or less indefinitely. A major change in regulatory attitude is called for. (Among other things, pharma companies are somehow allowed to restrict distribution of their products such that potential competitors can't get samples for comparison and testing.)
Imposing cost controls, and having them administered by the same bureaucracy that's a party to the preservation of these mini-monopolies, doesn't seem like a solution.

I think the FDA is a big part of the reason - they act on a barrier on new competitors to the field (see the whole Epipen fiasco - they refuse to allow competing products without exhaustive - and expensive - testing, even though all that would be tested is the delivery system, not the drugs).

And another big part is the must-treat edicts that have rendered big-hospital ERs de facto free clinics for the uninsured (and in many cases, illegal).

Add in the high price of malpractice insurance and a court system penalizes and second guesses physicians who don't order full batteries of tests even though they know they're unneeded.

There are other causes, too, and people can legitimately argue how much weight to give to each factor.

@Kamas716 "I wonder what happened in the mid-60's that could have affected medical costs?"

Lyndon B. Johnson and The Great Society happened.

Eric, I stand corrected. thanks. I did more research and this seems to be the reason:

"Then, a few years ago, as part of the campaign to eliminate CFCs and save the ozone layer, CFC-based inhalers were set to be banned. Pharmaceutical companies took advantage of this to design new delivery systems and surround them with a thicket of patents. As a result, even though albuterol itself might be off patent, only name-brand asthma inhalers are available—and since there's now no generic competition the big pharmaceutical companies are free to jack up prices to their heart's content."

Again, the problem is that there is no "Free market" for many of these drugs, and its extremely easy for the Big Drug Companies to conspire to make a killing off a easily manufactured drug.

rcocean: Yup, lack of a free market is very much a thing.
The CFC redesign is just one of many excuses for playing with the system. Seems some companies are making fiddly changes to their branded products, just so that any generics will be generic of the previous version of the product and not valid substitutes for the name-brand product that doctors are prescribing.
And, somehow, fiddly changes (slightly different dose per pill, different pill coating) seem to be patentable nowadays. Dunno what happened to "novel, useful, and not obvious."

"there is no "Free market" for many of these drugs...a easily manufactured drug."

Sure there is a free market; if you want to make an "easily manufactured drug" go for it. And you will also be free to sell it for whatever price you decide. Heck, you can give it away.

But, if you do not turn a profit, you will not be in business for long, and if you do not provide optimum efficiency to produce a profit (which is your fiduciary responsibility to any shareholders) you will quickly be removed from managing that company.

BFR: Sure, there's a free market... if you don't mind being prosecuted for selling a pharmaceutical product without all the government-mandated licenses, approvals, and such.
Which is to say, there's no free market at all in this area of business.
(No, you can't get away with selling it as a "dietary supplement" if it's the same chemical as a prescription drug. Not even if you bulk it up with dried lawn clippings and call it "festucum pratensicum". The FDA will catch on eventually.)