Remember the subprime mortgage bubble in the US in the early years of this century?  It led directly to the 2007-08 financial crisis, the echoes of which are still with us today.  It looks as if one of Canada's major mortgage lenders is rediscovering the implications of that bubble.

Home Capital Group Inc.’s shares plunged more than 60 percent after the mortgage lender disclosed a costly new loan to tide it over as its deposits dwindle, intensifying a spiral of bad news for the company.

“They did what appears to be to us a very expensive deal,” said David Baskin, president and founder of Baskin Wealth Management in Toronto, a former investor in Home Capital stock. “Basically they blew up the income statement in order to save the balance sheet, which I guess if you’re facing an existential crisis is what you have to do.”

Ontario’s securities regulator last week accused the company of misleading investors and breaking securities laws. On Wednesday, Home Capital shares dropped as much as 64 percent in Toronto to C$6.11, their lowest since 2003 after their biggest ever one-day drop. Other home lenders’ shares declined as well, with Equitable Group Inc. falling 32 percent, Street Capital Group Inc. down 7.5 percent, and First National Financial Corp., 8.5 percent.

Home Capital’s troubles come as housing prices have jumped in Canada. In Toronto, home affordability reached its worst level since 1990 at the end of 2016, according to a report from Royal Bank of Canada.

Yes, I know, it's Canada;  but that country's economy is a microcosm of the US market.  Anything that happens there is very likely to be reflected in our own economy, and vice versa.  As Zero Hedge points out, Canada's entire wildly-inflated mortgage market is reeling under the shock of Home Capital Group's crisis. 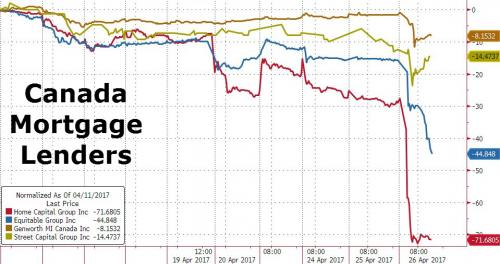 It's precisely that sort of financial shock that preceded - and precipitated - the US financial crisis, a decade ago.  The subprime mortgage crisis led directly, and very quickly, to a banking crisis - remember the Lehman Brothers bankruptcy?

This situation will bear watching.

There's a big difference Pete. America's sub prime crisis, if I understand it correctly, was the result of loans being extended to people that essentially had no business borrowing large sums of money - which in turn lead to an artificially inflated market.

My understanding is that Canada's mortgage laws forbade the types of loans bankers were making down in the US. That is not to imply that our laws are superior; Newt Gingrich aptly described American lending practices as 'suicidal'. Canadian lending practices would similarly be described as 'shooting yourself in the foot'.

I thank God my mortgage is paid. I am not rich, but I am free.

There's another difference, in Canada's banking system, there are like 6 banks in Canada, total, and aside form being decently run and profitable, they will not be allowed to fail ( it's almost inconceivable in the Canuck context)

I, too, am glad to hear your mortgage is paid in full, as is mine. There's nothing quite like it.

To understand the crises in the United States, obtain a copy of "The Big Short" and watch it 2-3 times. It's not only an enthralling film, but it provides a great explanation of what exactly happened and why.

Fred2: While your point is well taken, I remind you that the Titanic was unsinkable. It's fine to tell yourself that one or more Canadian banks won't be allowed to fail while they aren't failing. Let one go belly up and see just what is allowed and what is not.

I'm reminded of the space shuttle Challenger, when some unidentified engineer said, "We were lucky with Mercury. We were lucky on Gemini. We were lucky on Apollo, and so far we've been lucky on the shuttle." I think this was just before the thing blew up about a minute after it launched.