A second, or even a third, life for the Avenger?


Late last year I speculated about the present status and future potential of the General Atomics Predator C, also known as the Avenger (the prototype of which is shown below), and, in maritime form, as the proposed Sea Avenger. 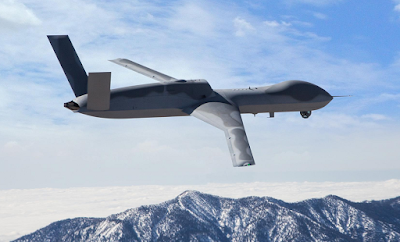 Now the company has confirmed that it'll offer the Sea Avenger as a base platform for the US Navy's MQ-25 Stingray project.

The MQ-25 Stingray evolved from the ashes of the U.S. Navy's Unmanned Carrier Launched Surveillance and Strike (UCLASS) program. The program was introduced publicly in the Navy's fiscal year 2017 budget submission.  The aircrafted was redesignated the MQ-25 (M for multipurpose) from the RAQ-25 – the Carrier Based Aerial Refueling System (CBARS).

Stingray's primary mission will be airborne tanking, but the aircraft's pylons will also be engineered to fire missiles and drop bombs.  The tanking mission is necessary to relieve the carriers' F/A-18s that currently perform that role.  Additionally, the requirements necessary to make UCLASS a low signature (stealthy) penetrating air frame have been removed for Stingray.

The Navy is expected to award an air vehicle contract to one prime contractor in the second quarter of 2018 with the initial delivery scheduled by 2021.

What interests me most is that, according to Wikipedia, the MQ-25 Stingray program is expected to "produce a Super Hornet-sized carrier-based aerial tanker as the Carrier-Based Aerial-Refueling System (CBARS), with 'a little ISR' and some capabilities to relay communications, and strike capabilities put off to a future version of the aircraft".  In its present incarnation, the Avenger is far smaller than that.  The Super Hornet is 60 feet long, has a wingspan of almost 45 feet, and weighs up to 66,000 pounds fully loaded for takeoff.  The original, land-based Avenger is 44 feet long, has a wingspan of 66 feet, and its maximum takeoff weight is only 18,200 pounds.  If the Avenger is to be "up-sized" to be a "Super Hornet-sized... aerial tanker", it's got a long way to go!

Nevertheless, this effort by General Atomics is intriguing.  As I speculated last year:

There have been few announcements about the Avenger since [2009].  It's been offered to the US Navy as a carrier-borne drone, the so-called 'Sea Avenger'.  One example was bought by the US Air Force for trials, and it's been suggested (but never proved) that several were bought by a three-letter-acronym agency of the US government for unspecified duties.  Your guess about that is as good as mine.

The very lack of information about Avenger is intriguing.  If the program were still being funded only out of corporate resources, it would surely have been dropped a long time ago, because such aircraft are very expensive to develop.  Therefore, the ongoing activity about it suggests that external funding is available;  and that, in turn, suggests some very high-powered interest in it.

For a program of this technological sophistication and expense to have persisted for over a decade since design and construction began, without any (announced) major orders or government investment, defies belief.  General Atomics is too small a company to fund those sort of costs out of its own budget.  This program must have attracted some very high-level attention, and a lot of 'black project' funding, to have been around for so long.  One wonders how many Avengers are already flying, carrying out missions that no-one will discuss over nations that no-one will identify?  It was designed with 'stealthy' characteristics, so it could probably operate undetected over a pretty large proportion of the planet's surface.  Pakistan?  Iran?  North Korea?  Nobody's saying - yet . . .

I look forward to learning how General Atomics plans to 'scale up' a stealthy aircraft less than a third as heavy as a Super Hornet, into something less- or even non-stealthy, able to carry enough fuel aloft, and keep it there for long enough, to refuel a carrier strike force on its way to or from a target.  I frankly can't see how the base Avenger design can cope with such growth.  Will we see the Avenger program used to 'cloak' the development of something newer and much larger?  With all the 'black' defense department money that's still floating around, stranger things have happened.  Alternatively, the Avenger could serve as the springboard for a totally new design, perhaps in collaboration with another aerospace company.

Things are getting interesting in US Navy air operations.  The sudden surge of interest in new orders for a more advanced version of the Super Hornet, the ongoing difficulties in getting the maritime version of the F-35 Lightning II operational, and now the renewed emphasis on pilotless refueling and ISR operations, point to all sorts of interesting possibilities over the next few years.  It'll be worth watching.

I guess part of the question is what "Super Hornet sized aerial tanker" means. If that just means comparable transferable fuel capacity it may be achievable. Similar length, weight, etc. is going to be a little tougher.

Like other drones the Avenger is optimized for loitering whereas the Hornet is built for speed and agility. The former seems innately better suited for the overhead tanking role. All in all it seems like an ideal mission for drone technology. Why devote a highly-trained strike pilot and an expensive warplane to a role that essentially consists of flying big, slow circles?

Hm... My aerial background is seating in tourist, but... It IS about a S-Hornet's size, just 90 degs off. And I have to wonder how much of that extra weight is life support and old materials (say, steel and titanium vs. whatever the UAV uses).