The Imperial War Museum in London, UK has released (in some cases, re-released) a number of color photographs from World War II, when that technology was still not widely used.  They reveal a past that was familiar to many of our parents and grandparents, but is largely forgotten or ignored today.  Here are just three of the recent releases;  click on each image for a larger view.

First, the German heavy cruiser Admiral Hipper in dry dock in Kiel at the end of the war, after having been heavily bombed by the Royal Air Force.  She was subsequently scrapped. 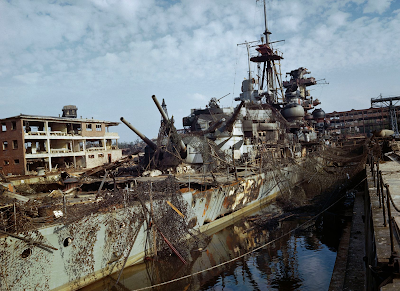 Here's a British BL 5.5" Medium Gun, firing on German positions in Italy in September 1943.  (This is particularly interesting to me, because those cannon were also used by South Africa well into the 1980's, until sufficient more modern artillery became available to replace them.  I can recall seeing them in action in southern Africa on more than one occasion.) 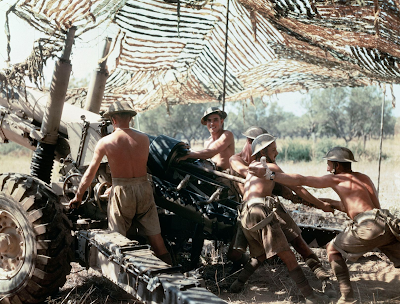 Here's a Churchill Crocodile flame-thrower tank in operation in France after the Normandy invasion in 1944. 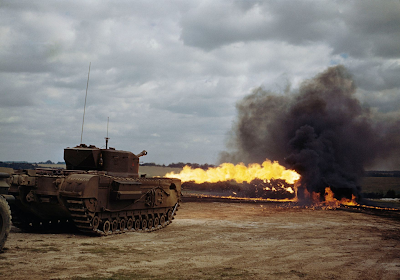 This last picture, also from the Imperial War Museum, isn't part of the recently-released batch, but I find it fascinating nonetheless.  It shows the Royal Navy battleship HMS Howe, passing through the Suez Canal in 1944 on her way to the Pacific Ocean theater of combat, where she served as the flagship of Admiral Sir Bruce Fraser during the Okinawa campaign and the final months of World War II.  The felucca in front of her uses a design that probably dates back to the Exodus, if not before . . . an interesting contrast in technologies. 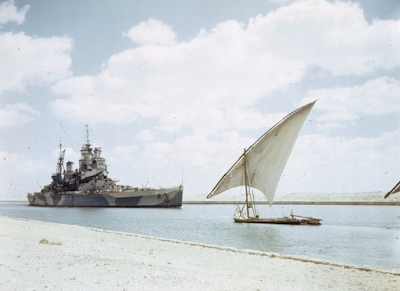 Thanks for sharing this link. The Imperial War Museum is an amazing place, and this photo collection of theirs is quite impressive.