Be very careful how you unload your firearm . . . 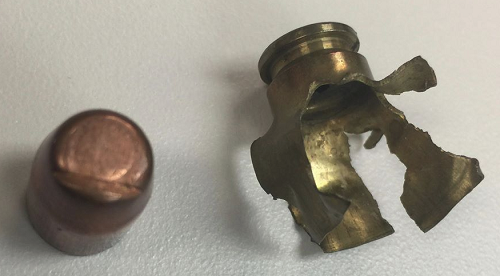 There is a noticeable linear denting on the nose of the projectile and an obvious strike point on the rear of the case and the primer. The projectile could not escape and the resulting effect was for the case to burst. The pressure from the burning propellent was absorbed by the shooter’s hand. He will not be able to make this mistake again.

It is a sobering lesson for many shooters. No one ever really believes that this could happen to them.


There's more at the link, including more pictures.

This is something most of us do instinctively, wanting to avoid having to bend down and pick up a round off the ground (which may be muddy, wet, or otherwise an undesirable destination for a live round).  Trouble is, trying to save ourselves trouble can get us into even bigger trouble, as the shooter above found out. Not a good idea.

Ejected brass is hot. What on earth was he thinking?

I am guessing his hold on the slide slipped, slamming and pinching the cartridge in the ejection port?

A similar possibility caused a recall/replacement on early Glock pistols, where holding the pistol sideways to eject the cartridge up (to be snatched out of the air like an operator!) would allow the base of the cartridge to slide over and the primer would hit the ejector...the fix was a longer ejector so the cartridge would not be able to keel over enough to contact the ejector except as designed: on the rim.

Generally if you need to clear a pistol and just take it slow, nothing bad will happen no matter your technique. Upside down over my range bag seems to work well for me...with no possibility of dirt from the ground getting into my carry ammo and still allowing the pistol to point safely downrange.

That's a shortcut, if you will, that a lot of people use in IDPA/IPSC. I have done it too, but after seeing this, not anymore!

I'm thinking, after looking at the pictures in the article, that it was a reload with an improperly seated primer. The case doesn't show a crease whereas the primer does.

Nonetheless, this is still good advice.

I'm thinking that the ejector hit the primer, and the pressure pushed the primer out of the pocket.


I always rack the slide quickly with the pistol canted to the left and catch the round in the air. I think I'll keep doing that.

The primer strike is square, no wider than the primer, and at an angle.
The only metal parts on the gun in the vicinity with that profile are the ejector, or the front of the extractor.

This leads to two possibilities.

(A condition I have noticed repeatedly on one popular pistol, when ejecting an unfired round. I brought it to the factories attention, there was no interest, although I pointed out the possibility of this exact occurrence to them.)

or-#2-the round was caught with the bullet between the barrel hood and the primer on the extractor nose, after it was partially ejected but restrained by the hand over the port and the slide started to come FORWARD.

Which it was, could be determined by a careful comparison of the primer deformation and bullet crease to the firearm.

This is a shooter induced malfunction. Doesn't much matter which gun parts contacted which cartridge surface, this doesn't happen EXCEPT when people try the "catch the unfired cartridge with a cupped hand over the ejection port" routine.
Your hand obstructing the cartridge from being tossed out of the gun is the primary problem. The other component is poor control of the slide while attempting it. No grasping grooves around the middle of the slide, is there? You think the makers want to add to their liabilities by encouraging owners to be this stupid?

This technique originated with gamers in IPSC, it seems. It does not translate well to real life. Guns intended for serious social use are quite different from race guns. They tend to be smaller, with smooth surfaces and edges. They are normally loaded with hollowpoints instead of ball/FMJ. Recoil springs are typically much heavier in reduced size guns intended to fire full power ammo.

Having seen the results of uncontained ammo detonating, I would not want my hand wrapped around ANY cartridge when it goes bang. One of the factors overlooked by most of the respondents at the original article is that the bullet and brass cannot separate, as they are being held together. The brass must fail in some manner, so it will develop much more power than a firecracker.
A possible enhancement to the power released is the possibility of bullet setback prior to detonation. This can cause chambers to fail, due to the resulting pressure spike, so it may induce even more hand damage if it occurs.

A few years ago, I was disappointed to discover that a big name school was now teaching this unloading technique. They wanted to stop the students from retrieving ammo from the ground. IIRC, there were two areas of concern about this situation, that they wanted to alleviate. One was inadvertently picking up someone else's ammo, that was incompatible with their gun. The other was having people crouched down while others were manipulating guns, with the resulting possibility of a torso or head shot from a ND, instead of the more common leg hit.
I pointed out to the instructors that there were a number of trainers, and ranges, that had forbidden this unloading technique, due to the inherent danger involved.

Since we were forbidden to retrieve ammo from the ground, a potentially dangerous ammo problem was not discovered until after class. The Blazer Brass .45 that we were shooting had no temper in the case, so there was obvious bullet setback, and my friend's gov model would often choke while feeding. The accuracy was poor, due to the variable power produced. The amount of bullet setback was frightening, actually. I don't recall my compact .45 choking, but with another 10lbs higher recoil spring over the government model, that slide tends to keep moving.

I don't know if they are still teaching this, as I have not returned since that class.

Consider your warning well received. I have always done this and was never trained not too. From now on i'll just bend over and pick the dang bullet up.