A tax plan I could get behind


I note (with a certain amount of schadenfreude) that elements of the Republican Party are moving ahead with a simplified tax plan that would eliminate federal tax credits for state taxes.  The New York Post reports:

House Republicans are moving ahead with a plan to eliminate deductions for state and local taxes in the new federal tax code — a move New York officials have warned would be “devastating” to the state.

The chairman of the House Ways and Means Committee, Kevin Brady (R-Texas), said Tuesday that he’s working closely with the White House on a plan that to create three federal tax brackets — 12, 25 and 33 percent.

But the sweeping change would also end the popular deduction for state and local taxes.

“We are proposing a change,” Brady said.

Brady added: “No longer will Washington punish or reward you based on how much you earn or where you choose to live.”

The goal, Brady said, is to make the tax code so fair and simple that Americans can file their taxes on a postcard. 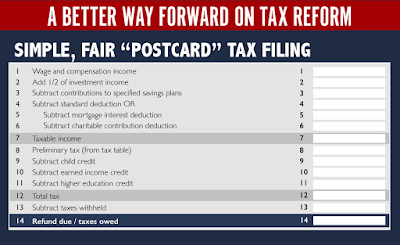 This would bring home to all Americans how efficiently their home states are governed.  Right now, high-taxing, high-spending states can mask their activities to a certain extent, because their taxpayers are sheltered from the local tax burden by deducting it from their federal taxes.  If that were no longer an option, every taxpayer would know precisely how much their state politicians are costing them - because they'd be paying it on top of, over and above, their federal taxes.

I believe in holding politicians' feet to the fire of public opinion.  This measure promises to do just that.  Count me in favor.

Sounds good to me!!!

Best thing to do, for ALL taxes, is to simply stop withholding them. Everyone gets a coupon with their check for each taxable district (Fed, state, county and city) and then each wage earner has to PAY HIS/HER OWN TAX (rather than have it withheld).

Watch the revolution happen.
People would freak at how much they are taxed when THEY have to write the check.

'Twould change the elections overnight. Would also change the size of our government rapidly.

Too bad for New York - it wouldn't actually change anything but it would make it clear to more people how expensive New York is (and California, as well as a few other states).
I wondered if they were going to keep other deductions and the link shows they will.
It looks like a good, simple, clear way of doing it - which unfortunately means it probably won't happen!

I say these Communist leaches would instead redouble their efforts to remove President Trump by any means, and the Rove Republicans would aid and abet them every chance they get.

it would actually change something quite significant.

currently if you live in a high tax state (like california), you pay less in federal taxes than you would if you lived in a low tax state (all else being equal)

With this change, you would pay the same federal taxes no matter where you live.

Rich people can take advantage of this by having an 'official residence' wherever they like, now it won't matter nearly as much.

As a California resident who would be hit by this, I think it's a great idea.

I also think that it's a great idea to put a large portion of the tax preparation industry out of business. All the money that people spend on that can now be spent on other things. It remains to be seen how business taxes end up being changed, there things are messier (we don't tax income, we tax profits, so your taxes are lower if you are in a low-margin industry)

I'm another Californian but I still support this one.

Actually, this change would encourage the rich to change official residences away from California, NY, and other high-tax states, not the reverse. Someone in million-a-year club would have another 10-plus percent of their annual income exposed to the Federal income tax.

I'm far from that territory, but it'd give me more ammo to try to persuade my wife to move away from Taxifornication when we retire.

People here in the real washington wil say finally a little equality. We don't get to deduct the income tax we don't have.

What B said above makes sense to me. Give the people who work their money back via their pay check. The harder they work (i.e. more money they make), the more reward. And people who do not work don't get any benefit, making it an incentive to find and keep a job.

A couple of thoughts, I have stated for years if we had to write a check to the government on April 15th for the full amount, there would have been a revolution a long time ago. With holding was a good idea, it spreads out the pain and people don't miss their money. Ask a co worker "How much is your check? " they will respond with "My take home is $$$". they are clueless on how much is actually paid out.

On the flipside, if people leave their high taxed area to a low taxed area, with some exception they will continue to vote for the policies that created their high tax areas...A,K.A. Democrats. They don't understand the cause and effect thingie..

I don't like the government again picking winners and losers. Eliminating a tax break only shifts where the money goes, and doesn't fix the basic problem of government entities out of control.

How much money I earn should be none of the Federal Government's business. Abolish the income tax altogether and replace it with a National Sales Tax on end-purchasers of new goods.

Buy an apple? 5% NST.
Buy a previously un-owned (by anyone other than the manufacturer) house? 5% NST
Buy a used car? No NST.

Everyone has skin in the game. How much you pay in taxes is dictated by how much new stuff you choose to buy.

The 5% figure is pulled out of my ear, so it might be adjusted, but couple the NST (and abolition of all other Federal taxes) with elimination of all redistributive welfare programs, and people *will* learn to economize and live within their budgets.

Not enough opportunities for graft and influence-peddling though, so it won't happen:-(.

Sorry.
Taxation is THEFT!
Abolish personal income tax and eliminate the tax code, and the IRS!

And when we can't afford our military anymore, and Mexico decides the stealth colonization isn't going fast enough?

Taxation for redistribution is theft. Taxation for national defense and law enforcement is the price of living in a society.

I believe in holding politicians' feet to the fire of public opinion.


This is the incorrect end to hold in the fire.

At least for probably 90% of the office holders!

@Jason, the problem with a sales tax is that it puts small businesses at a significant disadvantage.

or they suffer from having to do a lot more bookeeping to track all their supplies, and all their sales, and who paid the sales tax on what.

@David Lang. Here in Texas, and in many other states, sales taxes already exist and don't seem to prevent small businesses from flourishing. The tools for keeping track of the bookkeeping already exist, so that shouldn't present any serious difficulties, and they wouldn't have to track income and payroll taxes for their employees, so that's one less complication to deal with.

As for hurting "the poor", I don't buy it. My proposal is explicitly on first-time sales of new goods. Buy used and you pay no sales tax. Buy in bulk and the tax burden is less than if you buy lots of pre-made stuff. The only poor who'd be hurt are those too stupid to adjust their spending habits, and that's their problem. Stupidity *should* hurt. The more it hurts, the more incentive they'll have to work their way out of poverty.

Making the poor comfortable in their poverty is one of the reasons we still have so many poor people.