When art collides head-on with reality


Two 'art' controversies have made it to the front page in recent weeks, and both raise similar questions.

First, a painting depicting police officers as pigs was removed from exhibition at the Capitol. 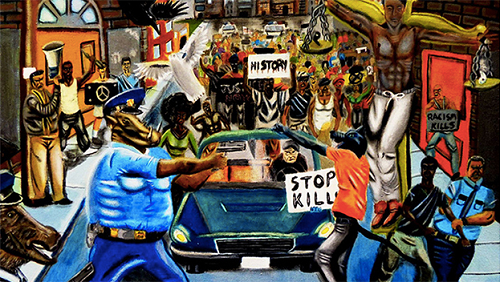 This week, a judge refused to order its return.

"There is little doubt that the removal of the painting was based on its viewpoint," Bates said in his ruling, dated Friday. But he concluded that the government's editorial decision to select and present the artwork meant that the display amounted to government speech and was, therefore, not subject to First Amendment protections.

Then, the University of Alaska at Anchorage defended a bizarre (and offensive to many, including myself) painting by one of its professors. 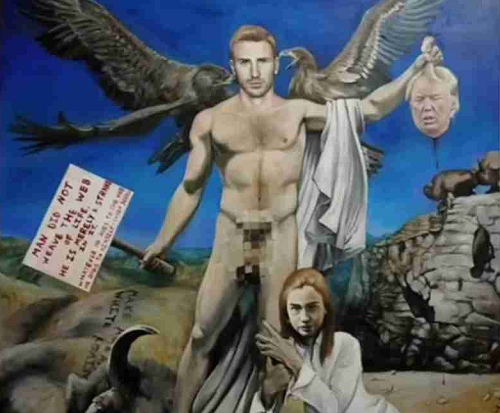 The painting shows a nude Captain America (as portrayed by liberal actor Chris Evans) standing on a pedestal and holding Donald Trump’s head by the hair. The head drips blood onto Hillary Clinton, who is reclining provocatively in a white pant suit, clinging to Captain America’s leg. Eagles scream into Captain America’s ear, and a dead bison lies at his feet.

The painting, created by Prof. Thomas Chung, hangs on campus as part of an art exhibition this month.

But it became controversial after a former adjunct professor, Paul R. Berger, posted the image on Facebook, saying he was “not sure how I want to respond to this.” On one hand, he posted, “first thing that comes to mind is freedom of expression,” but he also noted the university’s exhibit was publicly funded.

I think there are two problems to contend with.

I have only one strongly-held opinion about both paintings, and that is that government - support, funding, whatever - should have nothing to do with either of them.  If an artist wants to express a particular viewpoint, no matter how personally offensive I may find it, it's his or her right to do so as a private citizen, just as it's mine to support or oppose what their works have to say.  However, when tax dollars play any part whatsoever in producing, displaying or supporting the artist and/or the work(s) concerned, I draw the line.  The 'cops-as-pigs' painting should never have been displayed at the Capitol, and the 'beheaded-Trump' painting should never have been exhibited at UAA.

(For precisely the same reasons, I oppose any and all state funding for the arts.  Taxpayer money should not be used to subsidize private freedom of expression.  It's too easy for it to be hijacked by those of one or another political, social or cultural persuasion - just look at the NEA or PBS for proof of that.  Let those who like the art in question support it by their purchases, donations, etc.  Leave public funds out of the equation.)

I have heard that Sesame Street has made "gazillions" of dollars over the years....then why are we still supporting the PBS? Isn't that what free enterprise is all about? Producing a product and then reaping the rewards? So why is my tax money continuing to go to a successful franchise?

Art is a hobby, a job skill at most. By and large there is nothing really special about it and it damn sure doesn't need public funding. Most of those idiots are so far up their own asses that they need a tow truck to remove it.

In my opinion, the judge got it wrong. The capitol exhibition iirc was viewpoint neutral, but not topic neutral. Art representing current events was not eligible for display. That is why the pigs painting should never have been hung in the first place, not because it was very offensive to much of the country. As far as it being government speech, so the government gets to choose, I will call bs, The place for that sort of choice is in the rules for the contest, not after the fact. Even there, I am not comfortable with tax money being used to push one side of a debate, even if I agree with that side.
Needless to say I agree with Peter that tax money should not be used to support the "arts".

They are both horrible pieces of art, that said if the "artist" wants to create it so be it. Meanwhile they should not get a dime from the taxpayers.

Martial artists get massive taxpayer funding. The program is called the Armed Forces and is probably the only arts funding that is Constitutionally permissible, in fact mandatory.

PBS is a socialist's dream. Force the proles to cough up money, then 'we' can educate them.

I like the nature shows, but I am sick of every nature show turning into a "humans are evil and bad and should all be killed! Except 'us' of course, because WE understand ecology and stuff."

Heinlein said it best "A government supported artist is an incompetent whore."

Universities may SAY that they are not government entities, but they sure do stuff their coffers with money extorted from ME at gunpoint.