Those of you who've followed the saga of Ashbutt, the farm kitten we adopted last year, have seen several pictures of him as he's been growing.  He's nine months old now, and shows no sign of slowing down.  He's gone from a tiny kitten to a 13-pound adolescent, and looks set fair to end up somewhere between 15 and 20 pounds by the time he's fully grown, courtesy of his part-Maine Coon genetic inheritance.  Here he is on the far side of Kili, our (much smaller) female cat.  He's almost twice her size - the perspective makes her look bigger. 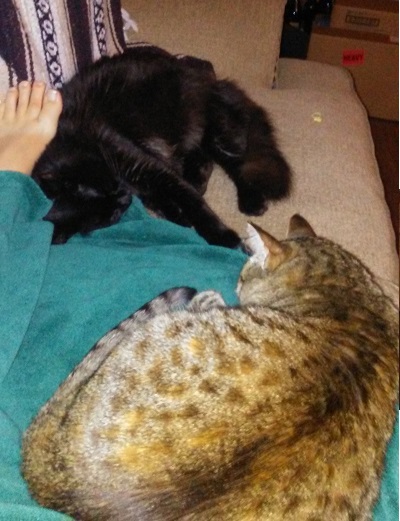 His markings have changed, too.  His grey patch was all on his butt to begin with (hence his name);  but it's migrated to below his belly now.  He has gray streaks behind his front legs and in front of his rear legs.  Who knows where they'll end up when he's fully grown? 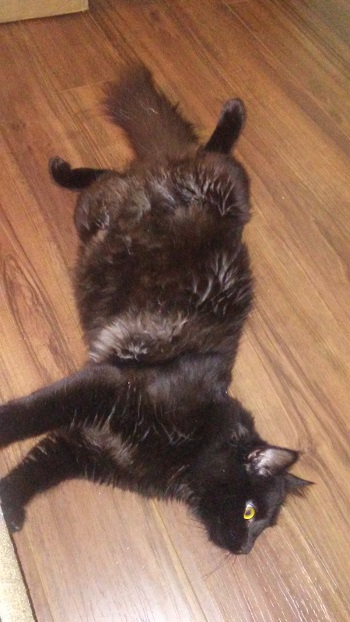 He's as mischievous and rambunctious as ever.  As far as he's concerned, bedtime isn't when we go to sleep - it's playtime!  As a result, getting settled into bed has become a nightly adventure, with toys being brought up onto the bed accompanied by demands that we throw them for him, hunts for toes under the covers, and much gigglage from Miss D. and myself.

He's a joy to have around.  Even Kili has gotten over much of her earlier resentment at having to share the house (and us) with another cat, and is ambushing him now and again (and even eating his food sometimes, to his frustration - not that he never does that to her . . . )

Sounds like a Maine Coon mix, all right.
My three formerly-feral-kittens are now a bit over four years old, between 12 and 14 pounds per, and still playful.
Not being much of a cat person, I've tried to raise them as dogs, with limited success: I haven't persuaded them to bark at the postman, but one of them likes to play fetch, and they all tend to follow me around wagging their tails.

Yep, and the "I will kill your hand" mock attacks are funny too...

@Eric Wilner - Have you started taking them for walks around the block yet? I used to do that with mine. I'd start walking, and she'd follow me. I had to call her to keep her going sometimes, but she never needed a leash...

@Feather Blade: Alas, taking them for walks around this neighborhood sans leash seems a bad idea. Too much traffic too close at hand, and generally too many hazards and alarums for such excursions.
Somehow the feral, stray, and otherwise free-roaming cats seem to get around, but I'm not sure what their life expectancy is.
I took them to the park on leashes a few times when they were younger, but then they learned to remove the harnesses before I could get them out the front door. They have more difficulty escaping a Kitty Holster, but (therefore?) they really hate the thing, and will run and hide when it makes an appearance.

Well that's why, Eric Wilner, you need to first distract them with a bath BEFORE you pull out the Kitty Holster. That way they'll be too annoyed to recognize what's actually going on until it's too late...
}:-]

I'm sure he's just a soft, fuzzy puffball. That is, of course, until some hits the "psycho" switch in his brain and then he's pointy and bitey in several places.

@Mark Matis: But first I need some greater indignity, to distract them from the bath....
Two of the three like to jump into the garage sink; if the faucet is on just a trickle, they'll happily play with the water. Actual baths, though, are considerably more challenging, and would seem to call for a claw-clipping session first.
Or maybe I could spend half an hour with the laser pointer wearing them out, but then they'd be too tired for walkies.
Only one possible answer. I need to hack into the orbital mind-control lasers! The critters won't wear their tinfoil, so they're susceptible!

Actually it's much easier than that, Eric Wilner. Just fill the tub with water, then pull out the laser pointer. Run them around the rest of the house for a little bit, then run the laser dot up the side of the tub and onto the far wall. My bet is that they "bathe" themselves. And then whilst they're still dazed and confused, put them into that Kitty Holster.

You merely have to be SLIGHTLY smarter than the cat...
}:-]

Cool - thanks for the update. It is amazing the amount of joy a couple of creatures (e.g., you and Ashbutt) can create in each others lives.

Who knows where the grey will stop?
My part-Siamese appeared & was taken in 11 years ago. At the time, at about 8 or so weeks, she was pure white, with hints of darker fur at the tips of her ears. I started calling her my "possum kitty" within a couple of years, as the darkening proceeded. Now she's only white on her rather comprehensive belly, and only on part of that expanse. Her face is almost entirely black now.
Ashbutt's posterior may wind up being the darkest part of him.
--Tennessee Budd