Last month, Cdr. Salamander put up a very interesting video of a talk by Prof. Eric Cline, titled '1177 BC: The Year Civilization Collapsed'.  Before embedding it, he had this to say.

Few things seem as frightening, or as unrealistic to those living in the "now," as systemic societal collapse. Not just of your country, but of the entire global system. All the zombie books, movies, and stories derive from that concern in the back of everyone's mind; an almost genetic memory. It should be, as almost complete collapse has been a regular occurrence throughout human history.

Sure, when you bring up the topic, most will think of the fall of Rome, but that was just one recent example in a long series of diverse, complicated, and relatively advanced civilizations that collapsed over the course of thousands of years on every continent but Antarctica - and at least for now - Australia.

I find this topic fascinating because there is always a collapse in the making small, and perhaps even large. They are decades, and more often than not centuries, in the making. Sometimes it is the collapse of a single nation, but often it is something much greater. Unless you believe that you are living in a unique moment in human history that has brought a halt to all the normal ebb and flow of our existence, you have to ask yourself, when is the next collapse?

Will it be small and localized somewhere else, or a cascading global collapse driven by its own inertia and logic?

Is it in 10 years? 100? Are we going to be lucky and have another 500 yrs to so to go? Or, are you living right in the middle of one yet, being part of it, don't have the perspective to see what is going on?

All these things came to mind again while watching the below video from Eric Cline, PhD, professor at George Washington University in DC, and author of a book, 1177 B.C.: The Year Civilization Collapsed. 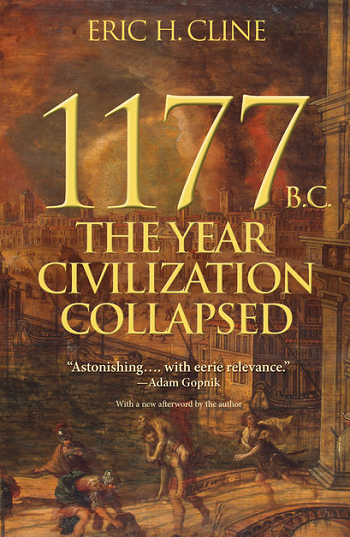 The video's over an hour long, but it's very interesting for anyone with a sense of history and a willingness to learn.  I strongly recommend that you take the time to watch it.  You'll learn a lot.

Very interesting talk. Thanks for posting the link!

Also, very off topic, the speaker reminds me of Capt. Kangaroo. I have to admit I missed the first 5 minutes, and had to replay it due to reminiscing watching his show.

And yet, that was just a fraction of the horror that attended the collapse of a dynasty in ancient China. If you look at the top ten calamities in human history (according to InfoGalactic), they are, of course, WWII, but numbers 3, 4, 5, 7, and 8 are all collapse of Chinese dynasties or rebellions against the imperial Chinese government before the British, French, Portuguese, Dutch and Spanish showed up. The estimates for the events run from 21 million people for the An Lushan rebellion up to 37 million people for the collapse of the Han Dynasty in the last 2d century AD, the story told in the Chinese classic, "Romance of the Three Kingdoms."

I watched it twice after finding it at Sal's last month.
I sent a link to my family and friends with a shared interest in history.
I was amazed at the profound knowlege that man had of the period, the times and the researchers who have been working in the field over the last 40 years or so. The Q&A after the lecture wsa interesting and every bit of research was referenced to who carried it out.

Another interesting book on the subject is Jared Diamond's Collapse: How Societies Choose to Fail or Succeed.

Hmm. I'll have to watch this. In my Bible reading right now I'm in the book of Judges, which is right smack in this period.

I read the book and thought it very good. Now I have a video to watch. Thanks, Peter!

His commments about the Exodus and lee n field's comment above reminded me of a very interesting and compelling bit of scholarship that can be found in summary form here:
http://www.biblicalchronologist.org/answers/millennium.php

Essentially, it lays out the case for the Exodus occurring 1000 years earlier than the conventionally accepted date, which brings archeological discoveries and the Biblical text into complete agreement. It also shows how an extremely easy to make copy error in the original Hebrew could have introduced the error in the first place.