The chronic mismanagement, inefficiency and sclerotic bureaucracy of Puerto Rico continue to take their toll on residents after Hurricane Maria.  The New York Post reports:

“There are plenty of ships and plenty of cargo to come into the island,” said Mark Miller, a spokesman for shipping company Crowley, which has 3,000 containers of supplies in the US territory.

“From there, that’s where the supply chain breaks down — getting the goods from the port to the people on the island who need them,” he told Bloomberg News.

Around 9,500 containers carrying supplies remained stuck at the Port of San Juan on Thursday, while the island’s 3.4 million residents faced another day of food, fuel and water shortages, waiting in hours-long lines to buy basic items.

“Really, our biggest challenge has been the logistical assets to try to get some of the food and some of the water to different areas of Puerto Rico,” Gov. Ricardo Rosselló told MSNBC.

Many roads on the island remain washed out or blocked by debris, and authorities have had trouble reaching out to truck drivers who can deliver supplies.

“When we say we that we don’t have truck drivers, we mean that we have not been able to contact them,” Rosselló said.

The Trump administration has been facing criticism over its response to the unfolding humanitarian crisis in Puerto Rico, with some charging that it was slow to react.

“The federal response has been a disaster,” said lawmaker José Enrique Meléndez, a member of Rosselló’s New Progressive Party. “It’s been really slow.”

But Trump’s advisers pushed back against those accusations on Thursday, with acting Homeland Security Secretary Elaine Duke saying that she was “very satisfied” with the federal government’s response and that “the relief effort is under control.”

What most critics are not saying (largely, I presume, due to trying to score partisan political points with voters) is that it's not - or, at any rate, should not be - the federal government's job to manage the local distribution of aid.  The feds didn't do so in Texas, after Hurricane Harvey, and they didn't do so in Florida, after Hurricane Irma.  That's because state and local governments did their jobs properly, and handled local cleanup, aid distribution and recovery operations.  Those things aren't supposed to be handled by and from Washington D.C.   How can a Washington bureaucrat know what's needed in a flooded neighborhood a thousand or more miles away?

Puerto Rico was already swamped by a massive financial crisis, long before Hurricane Maria came along.  The storm has merely worsened its already chaotic administration - just as previous hurricanes have done.

Why didn’t island officials, like Gov. Ricardo Rosselló and San Juan Mayor Carmen Yulín Cruz Soto, prepare for a disaster they knew was coming? And how did Puerto Rico spend several hundred million dollars in US taxpayer-funded FEMA grants?

Between 1956 and 1996, there were 12 disaster declarations from hurricanes and flooding in Puerto Rico. Over the last 20 years there have been 15. FEMA has provided nearly a billion dollars in disaster relief to Puerto Rico since 1998.

Old newspaper reports are not the only sources for what Puerto Rico could expect when a major hurricane hit. Government agencies publish post-incident reports following every hurricane. Many of them are available online.

We know some Puerto Rican officials must have reviewed at least some of them. They would have used the information provided in these reports to win $300 million from FEMA’s hazard-mitigation program.

The cycle rolls on: Puerto Rico gets hit by a major hurricane. The island is devastated. There is flooding. The power grid gets knocked out for weeks, if not months. The federal government sends billions of dollars for clean-up and repairs.

Then the next hurricane hits and the cycle starts all over again.

Karl Denninger is less polite about the Puerto Rican administration.

How does Congress "prevent a deepening disaster"?

It cannot.  You cannot change the laws of physics nor magically make things that are broken become not-broken.  There is no issue with funding in the current paradigm; the problems are logistical.

Those issues arose because of decades of intentional mismanagement, grift and fraud including by the Governor himself and the rest of the Puerto Rican government, which has taken on debt over and over while squandering it on social programs instead of taking care of critical infrastructure needs -- like basic maintenance to the electrical grid.

... prudence demands that reserves must be maintained as part of ordinary practice and infrastructure hardening implemented, so that when such disasters occur their impact is blunted.

We must not bail any of them out.

The lesson here is that if your government is squandering basic infrastructure maintenance and repairs so as to hand out cash to various people and favored groups, pretending the bill will never come due, yes it will, yes it does, and yes you will get hosed when it does.

In addition people should carefully consider the realistic carrying capacity of a given landmass in a given state of infrastructure development and maintenance.  Those who live in Puerto Rico currently did not, and sadly they are paying for that decision now.

Sadly, I have to agree with Mr. Denninger.  The current parlous conditions on Puerto Rico may be primarily laid at the door of the island's own administration.  It fell down on its job long before the hurricane struck - and it's never bothered to regain its feet.

Don't blame President Trump or Washington D.C. for what is, very clearly, Puerto Rico's home-grown problem.  That would be like the mayor of New Orleans blaming the lack of state and federal government help for failing to evacuate his citizens before Hurricane Katrina struck - while leaving hundreds of his own city's buses to flood in their parking lots. 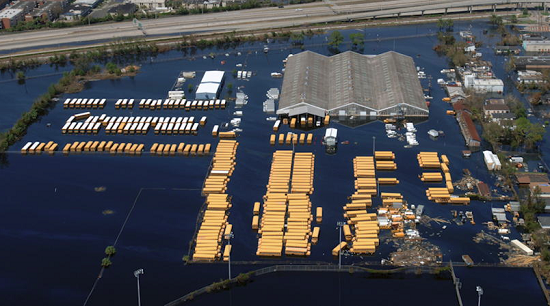 So, Puerto Rico is New Orleans all over again, but with a Spanish rather than a French flavor. Local corruption and incompetence, and the Federal Democrats blaming the Republican President for the flaws of the local (Democrat) government.

I think they'll catch cold at that; Bush was basically a nice guy. Trump ain't.

And why are the citizens of Puerto Rico so helpless? Where is their Cajun Navy? Have none of them any gumption or are they really all completely gormless?

If the media would just report honestly about this stuff it might get fixed. Instead they blame the wrong people and play "gotcha" with their political enemies. They are supposed to be our line of defense against government malfeasance but instead the ARE the malfeasance.

This why Puerto Rico should never become a state, and the United States should give them autonomy. You can't make chicken salad from chicken feathers.

The problem with Puerto Rico is that it is full of Puerto Ricans.

I know this from first hand experience living among them.

They have poor future time orientation.

Their whole culture is based on the grifting off of the US taxpayer.

Of course they have no Cajun navy, shit their truck drivers can’t even think of showing up to work without being called in... Everyone on that island is just waiting for someone else to fix their problems without any effort on their part.

Why we allow a island full of grifters full citizenship is beyond my comprehension.

Puertoricans did not want to leave the Spanish crown. You forced them to do so, it's your problem now.

Mars, you don't need to invoke race when culture fills the bill and then some. (Unless you are an early 1800s British writer, for whom culture could be the same as race.)

I see the same level of graft and corruption in my county (Alachua) in the state of Florida. Gasoline taxes for road repairs, yet no road repairs for 20 years. Suddenly, all our county roads are for shit, and the county commissioners say, of course, we'll have to raise gas taxes to pay for the road repairs. No explanation as to where the tons of cash from the collected taxes went for 20 years, or why only the same three roads ever got real road work, or why they always waited till football season to tear up everything.

As to Puerto Rico, well, reports are that the truck drivers are staying home because their union is pissed at upper management, and using the disaster to stick it to the governor and his staff. What city in the states does this remind you of?

It's way past time to let Puerto Rico have their own nation. There is no longer any sort of strategic or geopolitical rationale to keep them as a U.S. territory. They wanted their freedom bad enough to plant terrorist bombs all over the CONUS and shoot up the capitol wounding a half a dozen congressmen. Drop all territorial claims on the island and allow it to be an independent nation. Force it to if need be.

I used to think that the two were independant. I don't believe the two are inseperable. But I cannot deny that they are connected. I don't pretend to know to what extent they are. But there is some connection.

Maybe it's time to start hanging these politicians. They were in charge, they got all the money they needed, they wasted it all. They have any trees or light poles there? Hang 'em. Maybe the next batch will not be so cavalier about their responsibilities.

Oh, and go back and hang all those bastards in N'Leans. Better late than never. I'm real tired of this sort of performance from elected and appointed officials.