It seems an updated version of Russia's Klimov TV7-117 turboprop engine, being developed to power a new version of the Ilyushin Il-114 commuter transport plane and the Il-112 light military transport aircraft, is being air-tested in a rather unlikely-looking combination. 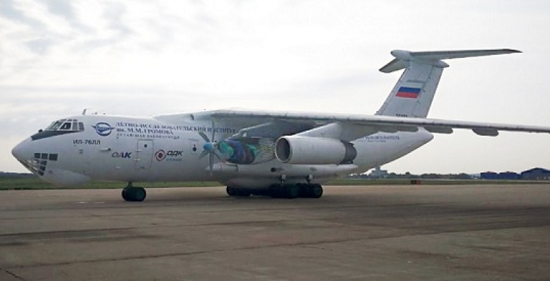 Yes, that's a four-engine Ilyushin Il-76 heavy transport plane, many times larger than the smaller aircraft for which the new engine is intended.  The Il-76 uses powerful jet engines, not turboprops, but that hasn't stopped Klimov from testing its new engine on its wing. 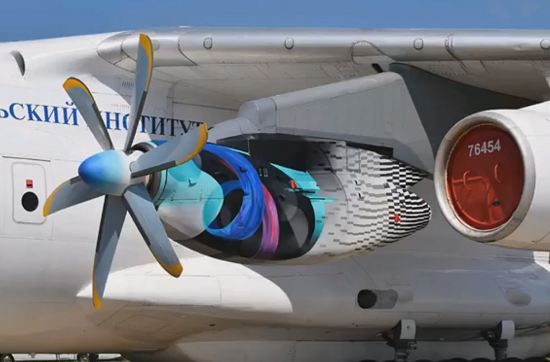 It looks very strange to eyes that know the Il-76, but it seems to fly just fine.

You can read more about the testing here.

Props and jets are a combination that's been used successfully in the past. The old B-36 comes to mind. The prop engines were radials, but it's still an interesting combination.

Yeah, that is odd. Obviously it's only for testing since they only mounted the one on the inboard starboard position, but just choosing the Il-76 as a test bed is surprising to me.

It's pretty common to have a "test engine" on an airframe like that.

the navy's p-2 Neptune had the same set up. the jets provided more boost for shorter takeoffs with heaver loads...the props provided longer flight time. once on station, the jets were cut off and the props put to loiter and on station times could almost double.

I wonder how much rudder they had to use to hold it straight on takeoff :-)

Maybe it's because I'm a genx child of the Cold War but there's something about Russian/Soviet aircraft that fascinates me. There's just a look to them that screams Russia. Could you see another country making an aircraft with the lines of a TU-22M? A TU-128? A Bear or Bison? A Flanker? They just have this unique design aesthetic which I find intriguing. Sad we don't see more of them at US airshows. Saw the AN-225 several years back. Awe inspiring. There is A.No way that thing should fly. and B.When it does get airborne it shouldn't be able to do it so quickly and maneuver like it does.

The engineers said it would be great. It's just testing, anyway. Besides, it's what the Ministry sent us.

Nothing new there, Peter. Here's a compilation of PWC test beds. I saw Big Red (the Boeing 720) in the metal in the '90s.

Boeing recently retired the longest continuously operational 747 that was used as a test bed for new engine. https://www.theregister.co.uk/2017/08/24/ge_aviation_flying_testbed_grounded/

Here is a picture of a propfan being tested on a gulfstream:
http://1000aircraftphotos.com/Contributions/Visschedijk/7046L-2.jpg

When flight testing new engines, putting a mismatch on a multi-engine plane is a good idea.

Interesting paint scheme on the test engine cowling. It reminds me of the stripes used on prototype vehicles in Detroit, meant to hide its shape- like some kind of optical ilyushin.

Ha ha, you have the best commenters Peter ;)