The Intercept has a lengthy and very interesting interview with Suki Kim, author of the book 'Without You There Is No Us'. 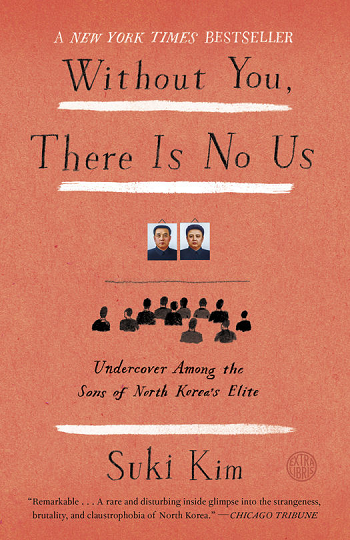 According to The Intercept, Ms. Kim:

... spent much of 2011 teaching English to children of North Korea’s elite at the Pyongyang University of Science and Technology.

Kim had visited North Korea several times before and had written about her experiences for Harper’s Magazine and the New York Review of Books. Incredibly, however, neither Kim’s North Korean minders nor the Christian missionaries who founded and run PUST realized that she was there undercover to engage in some of history’s riskiest investigative journalism. 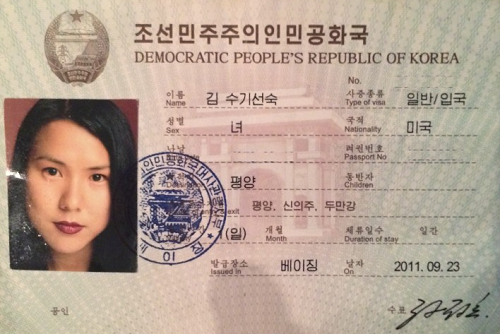 Although all of PUST’s staff was kept under constant surveillance, Kim kept notes and documents on hidden USB sticks and her camera’s SIM card. If her notes had been discovered, she almost certainly would have been accused of espionage and faced imprisonment in the country’s terrifying labor camps. In fact, of the three Americans currently detained in North Korea, two were teachers at PUST. Moreover, the Pentagon has in fact used a Christian NGO as a front for genuine spying on North Korea.

But Kim was never caught, and she returned to the U.S. to write her extraordinary 2014 book, “Without You, There Is No Us.” The title comes from the lyrics of an old North Korean song; the “you” is Kim Jong-il, Kim Jong-un’s father.


Here's a short sample of what the article and Ms. Kim have to say about the country and the current nuclear crisis.

With the Kim family autocracy now on its third generation, you’d expect the people who actually run North Korea to have abandoned whatever ideology they started with, and have degenerated into standard human corruption. But PUST’s enrollees, their children, did not go skiing in Gstaad on school breaks; they didn’t even appear to be able to travel anywhere in North Korea. Instead they studied the North Korea ideology of “Juche,” or worked on collective farms.

Unsurprisingly, then, Kim’s students were shockingly ignorant of the outside world. They didn’t recognize pictures of the Taj Mahal or Egyptian pyramids. One had heard that everyone on earth spoke Korean because it was recognized as the world’s most superior language. Another believed that the Korean dish naengmyeon was seen as the best food on earth. And all Kim’s pupils were soaked in a culture of lying, telling her preposterous falsehoods so often that she writes, “I could not help but think that they – my beloved students – were insane.” Nonetheless, they were still recognizably human and charmingly innocent, and for their part came to adore their teachers.

Overall, “Without You, There Is No Us” is simply excruciatingly sad. All of Korea has been the plaything of Japan, the U.S., the Soviet Union, and China, and like most Korean families, Kim’s has close relatives who ended up in North Korea when the country was separated and have never been seen again. Korea is now, Kim says, irrevocably ruptured.

SUKI KIM: Nothing will change because it’s an unworkable problem. It’s very dishonest to think this can be solved. North Korea will never give up its nuclear weapons. Never.

The only way North Korea can be dealt with is if this regime is not the way it is. No agreements are ever honored because North Korea just doesn’t do that. It’s a land of lies. So why keep making agreements with someone who’s never going to honor those agreements?

And ultimately what all the countries surrounding North Korea want is a regime change. What they’re doing is pretending to have an agreement saying they do not want a regime change, but pursuing regime change anyway.

Despite it all you have to constantly do engagement efforts, throwing information in there. That’s the only option. There’s no other way North Korea will change. Nothing will ever change without the outside pouring some resources in there.


There's much more at the link.  Sobering reading.

Not a student of NORK politics, just a casual observer, but it's puzzling to me why China hasn't just taken Kim out. Offer a few million and guaranteed sanctuary to the one who pops him.
The US of course has a stated policy that we just don't do that, at least not any more, but if they did stage a nuclear attack against us I double that policy would stand for a New York minute.

Thanks for sharing this type of info.

China has been using NORK as the 'rabid, chained dog' to control politics in the Asian sphere. Basically, "Be nice to us or we won't be able to control North Korea..."

This is why the current administration's insistence on the ChiComs actually doing something about their pet dog, and punishing the ChiComs over inaction, is so important. Previous administrations just glossed over China's role in all of this.

And... there is quite a bit of trade between the two countries. Of course, China being China, I am sure it is all in China's favor.

But now, even the ChiComs realize that they have little to no control over their pet rabid dog, and they are doing what ChiCom always does when faced with an untenable situation. Waffling. Severe waffling, with a heaping side of procrastination and an additional serving of blame shifting (it's all the US's fault...)

The true shame is that serious students of the Korean issue have been saying this for, oh, since 1945 (or at least since the cease fire) and everyone else has been saying, "Meh, it's just North Korea." So, now we have the mentally challenged, emotionally messed up kid next door who just got into daddy's gun collection and doesn't give a heck about what will happen.

Change will have to come swiftly and massively. Unfortunately, the only way to cause this change is going to result in a lot of dead bodies everywhere.

And all we have to do is see who in the State Dept. was involved in the late 40s-early 50s to have some idea why this was allowed to go on. Bet you fifty-cent his last name is Kissinger.

Judy, it's worse than that. You can pretty much lay the basis of all the failures in Modern Asia directly on the State Department of that paragon of US Presidents, Franklin Delano (I'm a socialist, yes I am) Roosevelt.

Failure of FDR's administration to support the Nationalist Chinese vs openly supporting the Maoists has given us the eastern world we now live in.

Holdovers from FDR that Truman and the succeeding presidents inherited just continued the stupidity.

Wow on the Pentagon using an NGO on NK. Words fail me. I wish Trump would do something to get the Dr. out of Pakistan that helped get Bin Laden.

Good article that mentions Juche. It's extreme nationalism / racism, reminds me of Imperial Japan before the US modernized Japan.

Peter, I read it a few years ago when it came out. Those excerpts barely scratch the surface; even reading it, it's impossible to grasp the enormity of what 3 generations of Kims has done. The term "Orwellian" gets thrown about a lot these days, but nothing compares to North Korea, nothing.

If the current regime were to magically disappear overnight, and the world were to pour in to rescue them, almost everyone over the age of ten would be lost. Maybe younger, given the chronic malnutrition (a Northern and Southern Korean side by side look like ancestor and descendant, with 200 years of health science between them).

Andrew,
you didn't go back far enough. Our State Dept considered the Soviets to be the best in the world, since their founding. Supporting Mao was to be expected.
They need to be tossed, along with the UN.

Kissinger wasn't around then. George C. Marshall, however was, and his incompetence set the stage for Korea and the Chinese intervention when he disarmed the Nationalists. Worse, he bragged about doing it. Marshall was Secretary of State when MacArthur was relieved, and while one can make an argument for that, Marshall was part of the cowardly coterie that backed down in the face of Chinese intervention.

China's losses in Korea were catastrophic, amounting to nearly a quarter of their entire Army. We had the ability to stand down China, but Truman and Marshall couldn't bring themselves to do the right thing, and so we live with the result of their kicking the can down the road.

The wisdom of one of the founders of the US, who said let war come now, so my children can have peace, can be seen. Truman and Marshall's generation could have solved the problem then. They didn't so we have to live with their cowardice.