I've become very annoyed at much of the commentary this weekend concerning President Trump's call to the National Football League to fire players who protest during the playing of the national anthem.  One would think, to judge by the voluminous verbiage being spouted by so many, that this was a case of Big Brother oppressing its citizens yet again.  In one of the more balanced comments, the Wall Street Journal opined:

With the politicization of the National Football League and the national anthem, the Divided States of America are exhibiting a very unhealthy level of polarization and mistrust.

Mr. Trump has managed to unite the players and owners against him, though several owners supported him for President and donated to his inaugural. The owners were almost obliged to defend their sport, even if their complaints that Mr. Trump was “divisive” ignored the divisive acts by Mr. Kaepernick and his media allies that injected politics into football in the first place.

Americans don’t begrudge athletes their free-speech rights—see the popularity of Charles Barkley —but disrespecting the national anthem puts partisanship above a symbol of nationhood that thousands have died for. Players who chose to kneel shouldn’t be surprised that fans around the country booed them on Sunday. This is the patriotic sentiment that they are helping Mr. Trump exploit for what he no doubt thinks is his own political advantage.

American democracy was healthier when politics at the ballpark was limited to fans booing politicians who threw out the first ball—almost as a bipartisan obligation. This showed a healthy skepticism toward the political class. But now the players want to be politicians and use their fame to lecture other Americans, the parsons of the press corps want to make them moral spokesmen, and the President wants to run against the players.

The losers are the millions of Americans who would rather cheer for their teams on Sunday as a respite from work and the other divisions of American life.

The WSJ almost gets it . . . but not quite.  Perhaps, as an immigrant to this great country, I have a different perspective, one that's a little clearer.

Every nation has its symbols;  those tangible things that represent what it is and what it stands for.  The flag and the national anthem are two such things.  Every American does - or should - recognize them for what they are, understand how they became national symbols, and the rich history that they represent.  Those of us who become Americans from outside certainly do - or, at least, all those with whom I've spoken certainly do.  We adopt those symbols as our own, learning about them, answering questions about them as part of the process of becoming citizens, and learning to value them more than the symbols we've left behind elsewhere.  I think that gives us an advantage, an insight, that's perhaps denied to those who grow up with them, never having to think about them.

Those who serve their countries also adopt symbols that have particular meaning for them.  Military servicemen know that their comrades and forebears died under the flag of their country, so it has particular meaning for them in that respect.  (South Africa has had a new flag since democracy came to that country in 1994, but I still respect the older flag, the one under which I served in the armed forces, despite the fact that it's tainted by connotations of racism.  It remains the flag under which many of my friends died, and under which I was wounded.  I still wear it on my lapel, paired with the US flag.  It's an instinctive tribute, and I guess it'll be that way until I die.)

There are other, less publicly recognized symbols that service personnel and veterans will understand.  A recent example is "The Brick of the Unknown" (shown below), carried by US Marine Corps service personnel during a recent run.  It's described as "a block symbolizing the weight of those who were lost or captured, to remember their sacrifice". 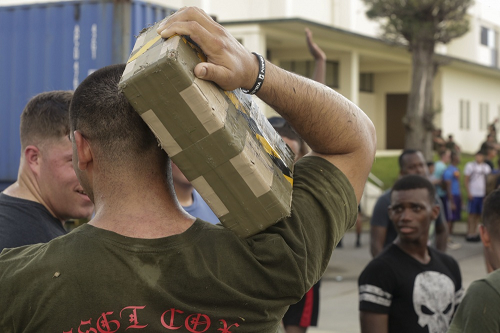 You can bet the Marines who carried it, and those who saw it, understand that symbol very clearly - and if anyone had tried to dishonor that symbol, you can bet there'd have been a very strong reaction!

I think there are a great many Americans who do understand the meaning of our flag and our national anthem.  To see NFL players deliberately disrespecting that, putting identity politics over nation, is not just upsetting to us - it's flat-out disgusting.  If they do not respect the symbols of our nation, they should just get it over with and give up their citizenship.  We don't need them wasting our oxygen, consuming our resources and trashing what we hold dear.  The nation is greater than the sum of its parts.  That's why our forefathers rebelled against Britain in the first place.  That's what they fought a bloody Civil War to maintain.  The nation serves us to the extent that we serve the nation, and vice versa.  No service - no nation.  We give in order to receive - and I'm not talking about entitlement programs or handouts!  It's a two-way street.

What the protesting NFL players are doing is making it a one-way street.  They're demanding that we - that our country - give, whilst they give nothing back.  They're trampling on the symbols we hold dear because they think there are some things more important than our - note, our - nation.  In trashing those symbols, they are also trashing those of us who hold them dear.  It's no wonder that the reactions to their protests have been so strong, and so negative.

Last night I heard a friend, who's watched NFL games on TV as long as I've known him, say bluntly that from now on, he'll watch something else.  I heard another friend ask for the channel to be changed when an NFL game came on, for the same reason.  I think the players and the NFL have no idea how strong a reaction their antics have stirred up - but I think President Trump understands very well.  In publicly excoriating them for their protests, he's tapping into a deep-rooted anger and disgust running through much of the American people.  I share that anger and disgust.

I hope and pray that Americans will vote with their feet, their TV remote controls, and their wallets.  Let's bankrupt the NFL.  Maybe that will alert the (hopefully soon-to-be-impoverished) privileged players, the team owners, and all others who espouse identity politics, that they can go too far.  In this case, I think they have;  and I think President Trump is absolutely correct.  Fire their asses!

Clueless that injected politics stupidly into sports are:

As I noted elsewhere, not everyone has jumped on the stupid bus.

NASCAR, in particular, seems to have flat out stated 'pull this shit and you're out the door.'

That's because NASCAR represents the real America that actually makes this country work.

The NFL has been in decline for several years while demanding increasing fees; and here, instead of working to change it, they continue to double down on what has lost them viewers.
It reminds me of the Democratic Party - they won't recognize that their message is unpopular and losing supporters and think that better presentation and speechwriters will save them instead of offering what people are actually looking for.

The flag and the anthem are the incarnate symbols of the nation.
Insult them at your peril.

I'm done with the NFL.
And I've spent a good chunk of the morning writing letters, informing companies that I would do no business with them so long as they provided financial support to protests against my country.

If I may offer a simplified alternative message, the NFL is escapism. They're lavishly paid circus stars.

I turn on a game hoping to see good competition among insanely gifted athletes. The last thing I want to see is politics. All I want to see is the athletes doing things normal people can't do. I don't care what they think about anything. Play ball, get your check.

Laura Ingraham had a great title for her book during the Bush years, partly inspired by the Dixie Chicks fiasco: "Shut Up and Sing". We pay them to sing, not make political rants. In this case, we pay them for acrobatics. They're dancing monkeys in a sideshow. Shut up and play ball!

It's awfully, awfully hard to consider someone making the multi-hundred thousand, or multi-million dollar paychecks as disadvantaged. The lowest paid players get hundreds of times more money and special treatment than anyone you or I know that's working for a living.

Just shut up and do your job. Play ball.

I have ranted more than once that the overpaid, entitled,self centered players that live better than 99% of America want to lecture us about social justice and what is wrong with America. Really?

I did the same thing JK. As soon as I found out that the writer of the pledge meant it to misdirect the loyalty to the Constitution towards the flag symbol. Ever since then my pledge has been recited to the Constitution and the republic which it created, not the flag.....

And I totally agree with SiG.

Our idiot in chief has screwed the pooch. He gets involved in a circus sideshow when he should be taking care of real business e.g. Puerto Rico. Millions of American citizens are in dire straights and he is busy debating with paid entertainers.

Kapernick's message is apparently more treasonous and despicable than this one:

Good for NASCAR! The NFL should have jumped on this immediately, before it got this out of hand. Most workplaces have policies that don't allow politicizing the workplace, as it creates a hostile working environment. And, yes...employers CAN "stifle" free speech, as the First Amendment only applies to restriction of free speech by the government.

It's unfortunate that Trump chose to jump into this so publicly, as he does represent the government when he says to fire the disrespectful .

Sadly, this will continue, and will probably spread. We've already seen the cast of Hamilton stop a performance to go after a politician. We've already seen celebrities trashing anything they disagree with, as if their political opinions are somehow more valid than yours and mine.

I'll go back to saying this... "Dance, Monkey, Dance." I watch movies and TV shows and sporting events to be entertained. I watch them to escape the unpleasant reality of a fragmenting country, at least for a little while. I don't want to be reminded of politics and many other topics any time I turn on the TV.

It is not unfortunate in the least.

The issue isn't that Trump did this.
It's that recent previous Presidents were derelict in the performance of their duties.

Because nobody is ever capable of doing more than one thing. Especially nobody in a position to delegate tasks to people who are more skilled in the planning and execution of relief operations than the person doing the delegating.

In other words: Concern troll is concerned. Serious, you guys!

Aiding Puerto Rico is a straightforward exercise in logistics. It requires a minimum of supervision from the CINC.
Fighting the culture war requires active leadership. And his expertise in this war was a (if not THE) major reason Trump was elected to the post.