Smith & Wesson originally applied the name "Combat Magnum" to their short-barreled Model 19/66 K-frame revolver chambered in .357 Magnum.  It gained a stellar reputation among cops and civilian carriers alike during the 1960's and beyond.  It's still being made.

However, Smith & Wesson have now introduced another "Combat Magnum", this time chambered for .44 Magnum.  It's a short-barreled variant of their Model 69, an L-frame, five-shot revolver. 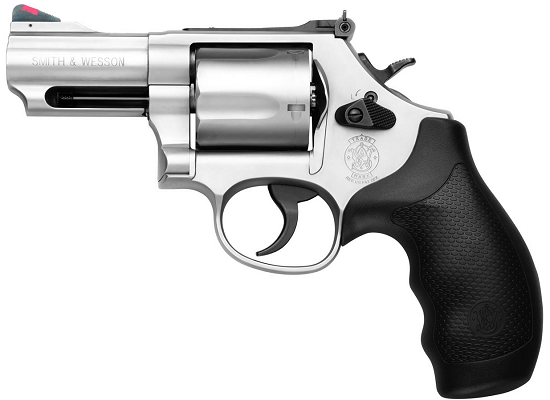 For those of us who remember the long-out-of-production Model 696, a 5-shot L-frame revolver chambered in .44 Special, the new revolver is a thing of beauty.  Its barrel is only ¼" shorter than the earlier model, and it's almost two ounces lighter.  It can chamber .44 Special as well as .44 Magnum, making it a very versatile firearm indeed.

I have both the original, 4.2" barrel Model 69 and the new Combat Magnum.  I find both very comfortable to shoot with .44 Special loads, even the anti-personnel or hunting stompers loaded by companies such as Buffalo Bore.  With .44 Magnum rounds, obviously, the comfort factor is a lot less;  but recoil is by no means unmanageable, and I can handle 15-20 rounds with no real problem.  I wouldn't like to shoot more than that in a single range session without either a recoil-absorbing shooting glove, or a better, more recoil-absorbing grip such as a Hogue Monogrip or Smith & Wesson's own X-grip.  However, that's an easy swap to make.  The short-barrel version is compact enough to be carried in an overcoat pocket for winter use, and its heavier bullet will penetrate deeper through winter-weight clothing, if necessary, than a typical .38 or .357 snubnose revolver.  That's something worth having.

If you, like me, are a revolver fan, the Model 69, in both short and longer-barrel versions, is worth a look.  No, I'm not being compensated in any way for recommending it, and the two I own were bought with my own money for my own reasons.

I went another way with the Ruger Super Redhawk in .454 Casull/.45 Colt. However, this is just as good and I like the Smiths A LOT. The venerable Model 66 was issued to SEAL Teams back when I was in service as was the 1911A1 Colt. The stainless Model 66 was better suited to a maritime environment than the Colt.

Several years ago friends and myself were on the pistol line out at Quail Creek range. Some guy shows up with 3 different Casulls and ammo, offering us the opportunity to shoot them. (I think he was trying to sell them although no offers were made.) As an old bullseye shooter I've put thousands of hardball rounds downrange but damn those .454 Casull hurt! Good way to develop a flinch if you didn't already have one.

Happy memories of my brother-in-law borrowing the one I was shooting WITHOUT asking what it was. The picture of the sight rib imprint between his eyes made my sore wrist worth it

I'd be happier if they made a no-lock version.

I have several old S&W DA revolvers. None are new, but all function just fine. The eldest is an old top break .44 Russian. Then there's a 1940 vintage M&P. Lastly an 80s vintage 624. Maybe it's time for something newer.

I will continue to lack enthusiasm for their products until they eliminate the Hillary Hole.

And when S&W stops selling them with the stupid lawyer-driven hammer lock, I'll consider buying one.

Until then, the only S&W products I consume will be obtained at the "used" counter, for exactly that reason.

$849 retail??? Whew...I'll stick with my little .38 Special Taurus 85 Ultra Lite wheel gun, thanks. If I save up my pennies, I can buy another one for my weak side and still have money left over compared to a S&W. Or maybe I'll buy a model 605 .357 in stainless steel. Yes, I know: quality, power, long-term value, comparing apples & oranges...but I don't carry every day and my budget can't justify double the cost for an S&W boom gun.

I suppose I could shoot it if I really had to, but if I had any choice in the matter at all I'd trade it for something a lot less... versatile. With very little weight to soak up the recoil, that thing will kick so hard that I'd ask the bad guy to run or surrender, just to keep me from hurting myself.

The analogue to your Taurus is a S&W Model 60, which is lots cheaper.

Good point, I overlooked the Airweight, too. Thanks.