Sounds great, but there's a catch


There was seemingly great news from the Federal Reserve today.

Americans’ wealth surpassed the $100 trillion mark for the first time in early 2018, as rising home prices offset the hit to households’ assets from a stock-market swoon in the first quarter.

Household net worth—the value of all assets such as stocks and real estate minus liabilities like mortgage and credit-card debt—rose by 1% from the previous quarter, or more than a trillion dollars, to a record $100.768 trillion, according to a report released by the Federal Reserve on Thursday.

Zero Hedge provided this graphic breaking down the increase.  Click the image for a larger view. 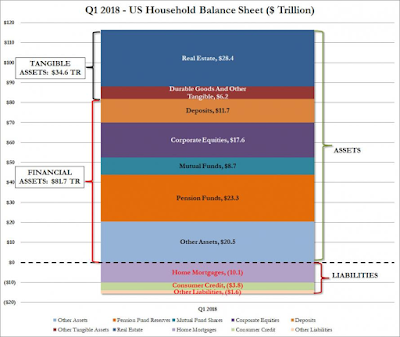 There's just one catch - a very, very important one, that the Fed doesn't bother to mention in its analysis.  An asset is worth precisely as much as someone else is willing to pay for it - no more, no less.  It's all very well to claim that the value of one's home, or investments, or whatever, has risen by X% or now stands at X number of dollars.  That's on paper, not in reality.  When you come to realize those assets, by liquidating your investments or selling your house, only then will you know what they're truly worth.

In the light of news earlier this week that mortgages are getting a lot more expensive, and people are having trouble qualifying for them, you may not be able to get as much for your house as you hope, because market liquidity may put the brakes on, big-time.  The same applies to liquidating financial investments.  If buyers have cash on hand, fine.  If they don't - if they depend on financing to buy what they want or need - that financing may not be as readily or as cheaply available as in the past.  In that case, the price you'll be able to realize for your assets will drop accordingly.

Don't base your own valuation of your net worth on "paper profits" or theoretical forecasts.  When you know what someone else is actually willing, and able, to pay for it, you'll know its true value - not before.  Its true value may not be in financial terms, but in practical ones, in terms of having a roof over your head that's either paid for, or priced at a level you can afford to sustain.  When a downturn hits, as we saw in 2007-2008, an awful lot of people don't have that luxury, or will lose it, because they've taken on more debt than they can handle when other factors - such as losing one's job - intervene.

The value of any thing is what two people will agree to at any given moment, nothing more, nothing less. This is the essence of economic freedom. This is also why there is no such thing as book value.

As to the value of things: do Craigslist sellers ever both to read the other ads? When there are 6 items just like yours for sale, all the asking prices are close, your ad has been up 30 days; maybe it's time to decide just how badly you want to keep it. What good is keeping something you want to sell for $300 sitting in your yard when you have no use for it anymore? You get an offer of $200 and you won't sell it. You still have it and still don't want it. Tell me again how you have won here.

It depends on how much you need the money and how well you know the market. If you need cash today then you sell. On the other hand if you aren’t in a hurry and have a fair certainty that in a couple weeks or a month you will get X then waiting is probably better.

To get a reasonable look at our (individual, family, organizations, etc) overall situation we have to use some kind of way of estimating value of items.

For stocks and commodities (precious metals, etc) it is pretty easy. You know what they are worth at any given time. Homes are a bit more problematic. If they really look a good realtor could probably give a very good (say +/- .05%) answer for the value of a home. On the other hand sweeping market generalizations are probably not accurate because a 10% increase in average sale prices might all be from one neighborhood, etc.