I'm sure many of my readers have endured, like me, many miles of driving along a highway reduced to one lane width - or even less - by traffic cones, deployed to keep highway workers safe.  Unfortunately, they may be working in only one spot, but several miles of road on either side of that place may be coned off, to allow them to move up and down the road.  There's no other way to do it - or, at least, there hasn't been, until now.

Wheeled ‘Robo-cones’ that trundle off when no longer required to shorten roadworks for motorists have been invented by British engineers.

A new prototype road cone has been designed by construction firm Costain , which can travel at 4mph and move itself off the motorway when repairs are completed. 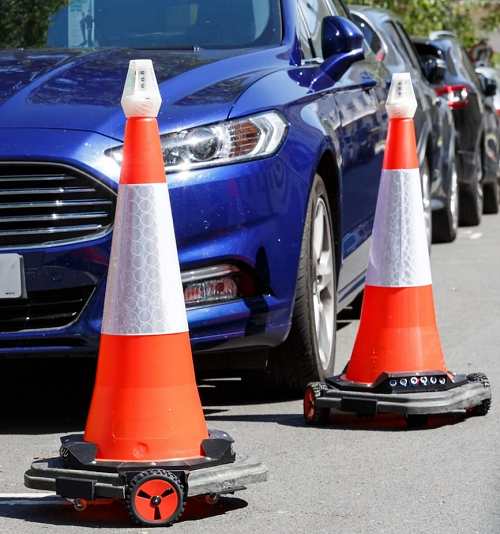 Currently drivers are forced to put up with long stretches of coned-off areas because it so hazardous to drop off and collect cones. Instead, companies cordon off large stretches at once for safety, rather than continually removing and replacing them.

He said: “You cone off much more than you need. You see it when you drive past for miles, the workers have done the work.”

Richard Golledge, a senior software engineer who helped design the device, said the Robo-cones were also far more easier to manoeuvre than the current versions, taking ‘just a minute’ to move into position.

“They are not autonomous,” he said. “It’ll be defined by someone who says where they want the cones.

“To have them completely autonomous and come out on the motorway and detect when there’s an accident, that would be perfect, although we are far from that.”

Now that's a useful idea!  Only trouble is, I can see students figuring out how to "hack" them.  They'll "cone-nap" them, chop off the top, and put a flat table surface on them;  then they'll use them as robotic drink carts in their living rooms or dormitories, controlled from their smartphones!

Young guys will run over them just to destroy them.

And the formerly Great Britain is found to be the origin of Daleks...

"Dr. Who" was supposed to be a warning, not an instruction manual...

A review from an engineer that doesn't actually lay out cones on the road, apparently. sheesh... So much wrong with this idea. Very limited use, expensive, and the inherent liability involved... Ah, well, they have to start somewhere, but that is not ready for prime time, yet.

It'll just encourage more drivers to cut around the car line, and cut in where the cones are with the corresponding accidents & worker safety issues.

Don't be fooled. They are baby Daleks.

How well will they work in slick/oily/wet/icy roads on a hill, how expensive are they compared to the normal rubber kind? It seems like a cool idea but I would think most places will stick with the proven orange rubber ones.

Ever look at the sides and bases of traffic cones? Lots of tire contact stripes.

I know truckers that already purposely run over cones for amusement.
A typical reflective traffic cone purchased in bulk is less than ten dollars each.
How much is a robot traffic cone, or rather, how many exponential multiples higher is the robot cone?

It'll never catch on here in the UK. Last summer I drove through 28 miles of continuous road works, all on 'average speed' cameras. Total number of road workers seen in those 28 miles - zero. The very idea of cones that indicate how much work has actually been done - unthinkable.

But isn't the cones' effect on traffic throughput an issue of creating a bottleneck, with very little additional slowdown as the narrow section gets longer?

There was a truly useful invention in use last year in St. Paul. We all know those wedge-shaped concrete barriers that can be picked up and moved. Last year they were working on I-94 in St. Paul, and in the morning they had more lanes going in to the city. Then this big machine rolled down the line of barriers, picking each one up and moving it over one lane. In just a few minutes, there were now more lanes going out of town for the evening commute.

Current cones stack and can be stored compactly; not true of these robocones.

That has been done for a couple decades? on the Golden Gate bridge (San Francisco), and I would also guess elsewhere. I would expect that bridges are more amenable to this, as there is no center divide normally required as part of their design.