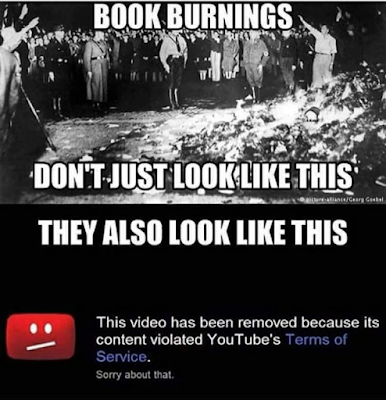 If you were in any doubt whether or not that meme is based on fact, this news confirms it.


Comments on social media were mostly critical of the move, many users saying Brownells is the wrong entity to go after to prevent gun violence.

I've been a customer of Brownells for many years.  It's anything but an "evil black rifle" vendor - it supplies parts, components and accessories for almost every firearm imaginable, from antique to modern, from hunting to target shooting, and almost everything in between.  A less "offensive" firearms vendor would be hard to imagine.  If you haven't shopped there yourself, I recommend them from personal experience.

Taken with anti-gun measures adopted by Quicken, which we discussed a couple of weeks ago, it's clear that any pro-firearm, pro-Second Amendment business or resource is now at risk from the politically correct and from Social Justice Warriors Worrywarts.  I suggest firearms owners and users should respond by voting with our consumer dollars.  If a business welcomes our trade, we'll use it;  if it doesn't, it can look for customers somewhere else.  The same applies to the parts of the US Constitution a business supports.  Since YouTube and the Second Amendment are clearly at odds, that makes it easier to choose which site should not host our videos and derive revenue from them, doesn't it?

Not just that, Bloke On The Range was terminated without notice too, although he was at least reinstated after a campaign but without any further explanation.

The problem is they are a corporation. If they were government entities, then you have a First Amendment Violation. We can't have it both ways; SCOTUS said a baker can refuse to bake a cake that the baker deems inappropriate. Therefore, Google, Facebook, and Twitter can do the same thing.

The Right has enough talent and money to start their own companies to serve their interests. It's called Free Enterprise. Stop sounding like a bunch of whiny-ass, funny-hat-wearing, SJWs and do something constructive, instead of piss-n-moaning about it or as my sainted mother use to say, "Shit or get off the pot."

While Judy is right that it isn't a First Amendment issue, it is still a censorship issue. There's even some truth to the comparison with the bakery case. There are also several key differences, however. The most important is the safe harbor provisions of the the DMCA and their limitations. As I understand it, if the YouTube is censoring content, they are exercising editorial control, and no longer have safe harbor from claims for infringement by posted content. YouTube and their parent, Alphabet, appear to be wanting it both ways, keeping their safe harbor protections and being able to censor content they disagree with.

Congress can get involved.

Grow a pair! Man Up! Don't dare point out the injustices in the world! Stop whining!

Regardless of her opinion of me, I will continue to point out the hypocrisy and call it what it is: censorship.

A violation of the Bill of Rights? No.
A blatant demonstration of leftists doing their best to destroy freedom of speech, wherever they have power? You betcha.

For good or ill, the Masterpiece Bakery case was about religious expression.
Is Google claiming a religious objection to airing the opinions of gunowners, conservatives, and race realists?

No. They are using their power in a heavy handed way to attempt to obliterate their opposition. Which is their right, currently.

We do need platforms that actually support free speech. In the meantime, pointing out the evil that is the Left is not whining. It is education, it is keeping freedom-lovers motivated.

Ditto TheOtherSean with regard to editorial control.
But wait! There's more!
It looks remarkably like what these publicly-traded companies are actually doing is wildly at odds with their corporate mission statements and other published policies. Securities fraud, anyone?
... And then there's the blatant hypocrisy of these same companies warning of censorship by ISPs in the absence of government coercion ("net neutrality").

Mayhap consider *reading* the decision you're using to support your condescension, before shouting self-righteous indignation from atop your soapbox, Judy? ;-)

If you had in fact read the majority opinion in the case [Masterpiece Cakeshop v. Colorado Civil Rights Commission] you reference, you'd know that the Supreme Court did *not* say "a baker can refuse to bake a cake that the baker deems inappropriate."

That's not even within shouting distance of the actual substance, or the spirit, of the opinion. In fact, the opinion is simply summarized as "The Colorado Civil Rights Commission demonstrated a complete disregard for the necessity of neutrality towards religion when deciding  [issues like this] and in fact demonstrated outright hostility to religion in their decision-making process. That's unacceptable." Again, that's a very much simplified version.

The essence is, the case turned, not on the baker's right to freedom of religious expression, but on the failure of the Commission to (essentially) keep their collective mouths shut regarding their hatred of Christ, and Christians, during the decision-making process. Had they been more circumspect, in public at least, the opinion as written would not apply. The Court very carefully avoided articulating the fact that the baker has a constitutionally enshrined right to religious expression, because otherwise they would have revealed the inherent insanity in the fact that later amendments to the constitution have been utilized to *abridge* that sacred right, and Supreme Court decisions have *furthered* that abridgement.

Freedom of Religious Expression is meaningless without Freedom of Association, and Freedom of Association has been dead for decades, murdered by the 14th (which paved the way for the Civil Rights Act), 15th, 19th, 24th, and 26th (which made voting a universal right, in a freaking Republic!) Amendments, the Civil Rights Act,  and the historically insane interpretations of "necessary and proper" and the Commerce Clause. As such, for now, Freedom of  (religious) Expression is a dead letter.

PS: Vox Day is doing exactly what you suggest. He's been doing it for more than a decade now. Others are doing similar things, though not many with the tremendous success that has thus far marked his endeavors.

And another word for piss-n-moaning? Motivation. Also, spreading awareness. Organizing. Recruiting. And so on. Okay? Glad you approve. :-P

PPS: You might notice, our gracious host never actually suggested that YouTube was violating the First Amendment. He merely suggested that YouTube despises the Second Amendment, and proposed that we stop financially supporting it if we disagree with that opinion and its ways of enforcing that opinion. In fact, minus the quoted tweet from Brownells, you were the first person on this page to *mention* the First Amendment.

(b) Establishments affecting interstate commerce or supported in their activities by State action as places of public accommodation; lodgings; facilities principally engaged in selling food for consumption on the premises; gasoline stations; places of exhibition or entertainment; other covered establishments.

The issue isn't selling goods to people, it's forcing someone to create/speak something they disagree with.

When you ask for a custom designed cake, you are asking for creativity/speech.

If the result is something that can be copyrighted, you should not be able to compel someone to create something you like that they disagree with,

I checked Brownells earlier today (Tues.) And it was Back up, without a peep from YT. Brownells was thanking the customers for their aid, and that was it....

The correct response is for gun owners to go after anyone who advertises on Goolag, ScrewYouTube. etc., tell them why they're being targeted, and then let the marketplace sort it out. When SJ warfare has a body count, they'll stop doing it, the same as puppies soiling the carpet.

What's more likely is that these antics by YouTube et al are going to succeed in getting the Internet regulated as a public monopoly, bringing it all under Uncle's thumb, and once the government's camel's nose is inside the tent, Internet corporations will go broke so fast and buried under so much regulatory red tape, it'll leave skid marks, and the body count will look like ants at a tap-dancing tournament.