After 60 years, the F-4 Phantom is on the way out - but it's still very impressive


The McDonnell Douglas F-4 Phantom II first flew 60 years ago.  It became the mainstay of the US Air Force and Navy, and was exported to countries all over the world.  It's still in front-line service in Greece, Turkey, Iran, South Korea and Japan.  However, the last-named country is about to phase it out at last, after 50 years of service.  An F-4 squadron will be converting to the F-35 later this year.

In preparation for the phase-out, aviation photographer Carl Wrightson and Rich Cooper, head of the Center of Aviation Photography, made a pilgrimage to Japan for a final photo shoot of the JASDF Phantoms.  The Aviationist has a collection of some of their beautiful images, including this one (click it for a larger view). 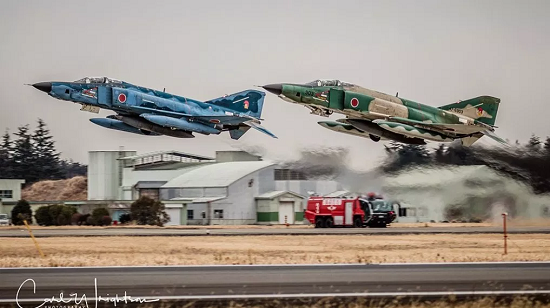 The article accompanying the images is well worth your time, if you're an aviation enthusiast.

For fans of the F-4 Phantom, here's a twenty-minute video showing takeoffs and landings of some JASDF aircraft early this month, in mid-winter.  There's some spectacular footage and sound, all in 4K, so watch it in full-screen mode and save a copy, if you can.

Great big roaring beasts, aren't they?  I understand someone once said that the F-4 is proof that, given enough thrust, you can make even a brick fly!  Despite their ungainly appearance, the Phantoms have built up an enviable combat record over the decades they've been in service, and can still draw a crowd of enthusiastic admirers whenever one shows up.  They've earned their stripes the hard way.

I worked on the Phantoms in the 1970s. Still have a soft spot for the beasts.

Great beasts! And that video was filmed in Misawa, JA. Fairly familiar with that base...:-)

The quote was from the abysmal TV Movie Red Flag: The Ultimate Game, which also invented the air combat maneuver known as the Two Handed Polish Heart Attack, used by the protagonist (Barry Bostwick) to defeat the villain (William Devane) in the flick, and further to inspire a couple of guys named Simpson and Bruckheimer to make another aerially awful but beautifully-shot and beloved movie about 1980s fighter combat known as Top Gun.
The Phantom was a gawky bird, long-nosed, bent-up wingtips, dropping tail, and courtesy of the idiocy of Idiot McNamara and his witless Whizkids, completely gunless, until the missile Mafia had killed enough pilots in Vietnam when their wunderweapons failed to perform more often than not, and left our guys hanging, until an internal or bolted on pod Vulcan cannon for air-to-air was restored, and we began reteaching fundamental ACM to its pilots.
But when it flew over or by, the Phantom was anything but a brick, or ungainly. A lot of guys are alive because one of them brought down a world of s*** on strafing runs and snake-and-nape drops from the Delta to the DMZ. And a Finger Four MIGCAP was the end of more than a few "advisor" pilots from around Hanoi, which helped keep the Soviet Union in its cage at the height of the Cold War, convinced they wanted no part of us.

Douglas, and later, McDonnell-Douglas birds are some of the roughest, toughest, bestest products ever flown by mortal man in war and peace, and the F-4 Phantom stands at the top of that pinnacle.

Whether the likes of modern-day Boeing and Lockheed craft will ever enjoy that sort of reputation is an open question, let alone enjoy six decades of front-line service.

I once had a pair of recon F-4's fly over me in my convertible at 520 kias and 200 ft. in Texas That was a religious experience!

Proof that with enough thrust you can even make a brick fly!

I'm not a fan of Robert McNamara, but I feel obliged to point out that McDonnell's internal conceptual work that led to the F-4 Phantom started late in the Truman administration, and the aircraft entered service with the US Navy toward the end of the Eisenhower administration, nearly a month before JFK appointed McNamara to be Secretary of Defense. The initial lack of a gun on the F-4 Phantom was not his fault.

The initial lack of a gun was not his fault.
But it didn't enter service until 1960, mere months before his disastrous tenure as SecDef.
Forcing all services to use the same gunless aircraft was his fault, as were the ROE in VN that precluded firing BVR missiles until one was tight into a furball, and too close to fire missiles at all.

The criticism, esp. of McNamoron, stands.
He killed more US pilots than the Vietnamese air defense forces.

And @Well Seasoned Fool
"Whether the likes of modern-day Boeing and Lockheed craft"...was the quote.

The B-52 airframe has been older than the pilots flying it since the mid-1980s, with the last one produced in 1962.
That makes them 57 years old at the youngest, which is past retirement age for even bird colonels.
That's also not "modern-day", unless one is in their late 90s, and still remembers flying SPADs and Curtiss Jennys first-hand.
;)

Interesting how close the performance specs are with the F-14 Tomcat. Except for combat radius, which was better for the Tomcat.
Maintenance hours/flight hours is what finally got the Tomcat tossed on the scrapheap.

Always loved that bird. I remember the model I put together in fourth grade. Was put on display in glass case.