The fake martyrdom of Trayvon Martin


Seven years ago, on February 26th, 2012, Trayvon Martin was legally shot, in self-defense, after he attacked George Zimmerman.  The latter's trial established the facts clearly and unambiguously.

However, Martin is still being held up as a martyr and a symbolic victim of white racism.  Here are just two examples out of hundreds seeking to exploit the anniversary. Click each image to be taken to its source page on Twitter. 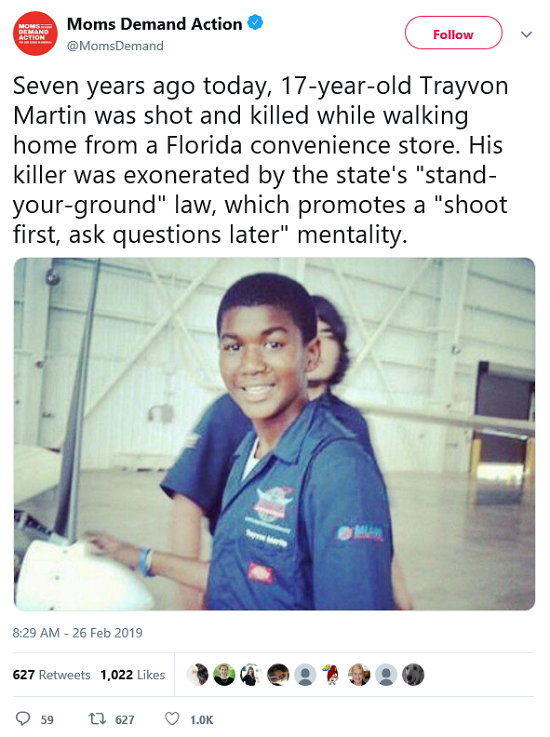 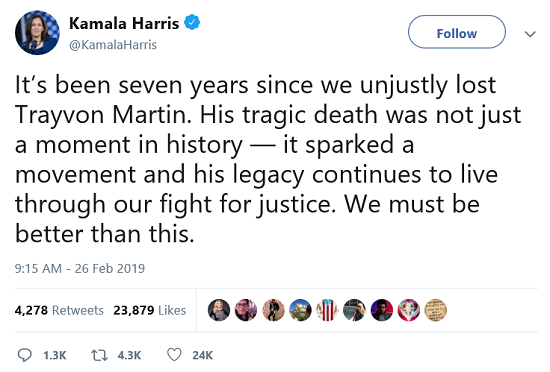 Like I said - all lies.  You can read the facts of the trial for yourself.  Nevertheless, the perpetually aggrieved social justice warriors wimps among us will continue to try to exploit this case, and many others like it, for their own ends - and truth be damned.

That's a pretty good litmus test for someone's value as a human being.  If they espouse facts - support them.  If they perpetuate lies - shun them.  That applies not just to politicians, but to everyone.

And they're still trotting out the stand you're ground lie.

I have a theory about why clearly guilty people are held up as tributes this way. There are innocent people out there, young men shot/murdered as they were "walking home" in fact. So why Martin and not them (we don't even know their names)?

Well, anyone and everyone would be agreed on the injustice in those cases, and are. And none of it is useful if everyone agrees. Only *division* is useful.

So the chosen poster boys such as Martin or Brown are generally outright criminals clearly shot in self-defense. It's the only way to get, use, and profit from division.

Notice they never show a picture of him at 17?

Mossad Ayoob did a series of articles a few years back that described the incident pretty well. It runs 20 parts, but the parts are short and it is well worth reading.

Like when you see a news article about some cop tasing an 11 year old. What they aren't telling you is the 11 year old is 250lbs, stands 5'10" and has a weapon and is beating the snot out of the officer. Because it would spoil the message..

Oh, in another 100 years, no one will doubt the martyrdom of the blessed St. Trayvon. Not if these clowns are writing the history textbooks. And, yes, clowns are evil incarnate.

Saint Tryvon of the Holy Hoodie was a G-dsend for the Left. Had Zimmerman (white, sounds Jewish) been named more appropriately for his ethnicity, e.g., Jorge Sanchez, this wouldn't have been a blip locally let alone nationally.

But in the lead-up to the 2012 election, this was a way for the enemedia to hammer, hammer, hammer home to blacks "WATCH OUT! Whitey's coming for you! So stay on the plantation..."

MArtin, Brown, et al are ALWAYS choirboys AFTER the fact. And the true facts be damned... Tell a lie often enough and this is what you get... Sigh

Here are the articles done by folks at Legal Insurrection, including Andrew Branca's excellent ones

Trayvon's mom, Sybrina Fulton, has gotten rich off this while other crimes that she's committed, including assaulting other relatives who dared sell "Trayvon" t-shirts without cutting her in, have always been dismissed. Can't prosecute a martyr's mom now, can you?

There is a youtube channel called Blue Collar Logic. He did a recent post on Motown vs. MLK. It was very enlightening.

Saint Tryvon of the Holy Hoodie

That's a good one, NITZAKHON. Two thumbs up.

Thank you, but in full disclosure I did not originate it. Saw it somewhere a few years ago and have used it since.

Wearing a cross for jesus is like wearing a gun for Trayvon,

The media lies. In other news, today is yet another day ending in "Y". - Kamas716

Martin was a young punk who thought he was a good deal tougher than he was. His death proves that nature abhors no vacuum more than one with ears on either side.