The Founding Fathers gave us an Electoral College for a reason


I note that one of the myriad Democratic Party candidates for that party's presidential nomination in 2020 has come out four-square against the Electoral College.

Pete Buttigieg, the Democratic mayor of South Bend, Ind., and a 2020 presidential candidate, on Thursday called for abandoning the Electoral College, saying it has made the country less democratic.

“We’ve got to repair our democracy. The Electoral College needs to go, because it’s made our society less and less democratic," Buttigieg said during an appearance on "CBS This Morning."

"We’ve got to explain our values and explain why Democrats are committed to freedom, to democracy, to security," Buttigieg added.

Some Democrats have voiced increasing criticism of the Electoral College since President Trump defeated Democratic presidential nominee Hillary Clinton in the 2016 election despite Clinton winning the popular vote.

There's just one problem, Mayor Buttigieg.  The United States is not a democracy.  It's a constitutional republic. 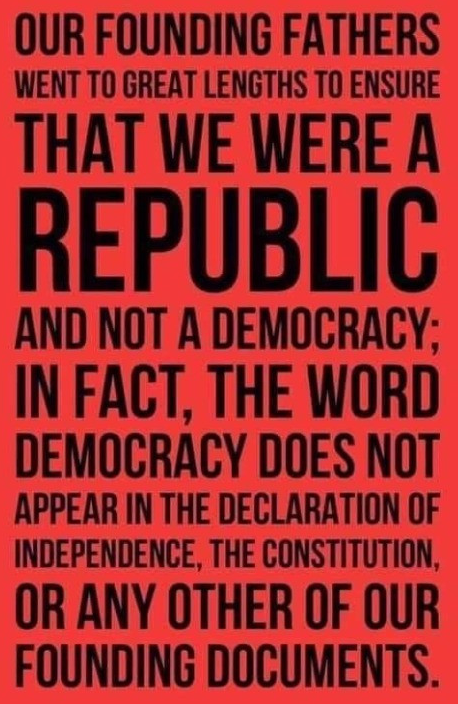 One of the hallmarks of a constitutional state of any kind (be it a democracy, a monarchy, or whatever) is that the will of the ruling power (the majority of voters, or the king, or whatever) is constrained by the legal requirements of the constitution - the so-called "Rule of Law".  In other words, they can do what they wish within those constraints, but they may not go beyond them.

The United States is such a nation.  In the case of the Electoral College, the only way to amend or abolish it is to use the process to amend the Constitution, thoughtfully provided by the Founding Fathers.  It's difficult to accomplish - deliberately so - but it's the only legal way to do it.  Any other way will be illegal in terms of the Constitution, and will therefore be disobeyed by any and all right-thinking Americans.

So, Mayor Buttigieg, I'm afraid your dream (a nightmare to the rest of us) won't become reality unless and until you and your party can get the necessary supermajorities in Congress and the Senate, or among the member States of the Union.  Somehow, I suspect that's not about to happen.

It'll happen anyway. You think LEGALITY or CONSTITUTIONALITY will stop the Democrats?

For stopping a DemonRAT, I think a couple of rounds of 7.62x39 would be ideal.

Hopefully not in our lifetimes, anyway.

Eliminating the Electoral College by constitutional amendment is one thing, but at this point there isn't that much support for the change. So instead the push is the National Popular Vote measure where states agree to cast their electoral votes for the popular vote winner.

I think it would be quite amusing if they get enough states to pass the National Popular Vote and then a Republican (or worse Donald Trump) were to win the majority. I can see a panic in states like Massachusetts trying a quick repeal so their electoral votes can go to the (Democrat) who won the state rather than the (Republican) who won the popular vote. Even more amusing would be a reversal of the last election, with Trump winning the popular vote but not the electoral vote and states having committed to the popular vote winner.

Regardless, anything short of a constitutional amendment is going to be tied up in the courts for years. Here in Colorado they are trying to pass the National Popular Vote measure but as written it won't affect the 2020 election since it will almost certainly be put to a vote under Colorado's referendum provision.

Pete Buttigieg: .." saying it has made the country less democratic."

The USA isn't a Democracy, it's a Republic.

When folks like this use the term "democratic" in this context, they really mean "Democrats". Its pure partisanship disguised in gauzy feel-good rhetoric.

The Electoral College idea is already subverted to some extent by the individual states and their ability to assign their electoral votes either proportionally or winner-take-all. I don't know which is more subversive to the founders' intentions. I guess it depend on who wins the election compared to who I want to win the election.

Which is NEVER, EVER a Democrat. The Republicrats only a little better.

The "National Popular Vote" is a myth. It was created by the press to enhance the drama of a Presidential election by watching the vote totals climb up. If you paid attention to your ballot, you didn't vote for Trump or Hillary, you actually voted for electors pledged to the party's candidate. A set of laws and protocols will need to be enacted to create a legal national popular vote. If this comes to pass California, New York, Illinois and Florida will determine the Presidency.

Since the "founders" didn't specify how electoral votes are distributed, winner take all or proportional are equally "intended". Holding a national vote for president on a given day is not part of the founders' intent either.

bart,
your remark that the states can decide how to apportion their electoral votes, which somehow degrades the process, shows you need to read the Constitution.

Article 2 states fairly clearly that the various states will "Appoint, in such manner as the legislature of the state may direct, a number of Electors".

Thus it is up to the State Legislatures, and the methods currently in use are all Constitutional.

Try reading the rules sometime. Might help you in playing games, too.

Let's think about this. Pure, unfettered democracy is now the desired end state, is it? Great. Let's go with that. So gang rape is OK since the majority of the "participants" voted for it? How about slavery? If we can get a majority to vote for it, shall we bring it back? In either case, will the losing party be expected to just throw up their hands and accept the outcome of the vote?

Yes, these are ugly, ugly questions. My only hope here is that the the kick to the gut sensation they evoke will bring a screeching halt to nonsense such as this. I am doubtful.

I'm reading "The Constitution of Liberty" by Hayak (a difficult read for me - his prose is both dense and detailed - to me at least). He makes a sensible and forceful argument that democracy is not an end state. Democracy is merely a tool - one mechanism of many (and so far the best we've tried) that may be used to settle differences of opinion non-violently; without it, our 'voting' would consist of bloodletting until one or another faction capitulated. We're getting closer by the day to that latter state, I'm afraid.

splitting votes based on the votes within the state is a reasonable thing to do, it still maintains the balance between large and small states.

There is the urban/rural split, to think about, but there I think that splitting the votes will give the rural people more representation rather than the entire state's votes getting cast based on a slight majority of urban voters.

It would also drastically change the election process as neither side could count on winning all the votes for a state (or on the other side, reliably count on not winning the votes of the entire state), and so would need to compete in every state rather than just 'battleground' states.

I can't claim credit for this idea, but... one idea that I heard was to have the electoral college votes for the CONGRESS split as per the state's popular vote, but then the two for the SENATORS awarded to the state winner.

This would, I think, make serious sense.

I’ve been saying this ever since the D mocrats started whining about the 2016 election; why do we believe Shrillary won the popular vote? I mean, given the Democrat’s history of ostentatious vote fraud?