Danger, disguised as a toy


It seems some criminals at least have found a new way to put their intended victims off their guard for just long enough to get within striking distance.

Police caught a felon painting a shotgun to look like a toy in a Spokane motel room Monday, according to Spokane Police Department in a news release.

The suspect, Elijah B. Zon, also was in possession of three black-powder guns, methamphetamine, heroin and ammunition. 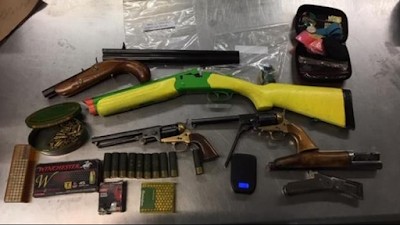 He was arrested and booked into the Spokane County Jail.

They found Zon in the middle of painting a double-barreled, sawed-off shotgun green and yellow with an orange tip to resemble a toy, according to the news release. Pictures display a shotgun painted on one side.

“Officers throughout Spokane County and across the nation come across real guns that are made to look like replicas,” the news release stated.

Police officers of my acquaintance have seen the same thing, although not quite so garish or covering so much of the firearm.  It's not uncommon for the tip of the barrel of a criminal's gun to be painted orange, so that the weapon resembles an Airsoft toy.  You can imagine the advantage this gives the criminal if his residence is raided by the police.  Their automatic assumption used to be that a toy gun was precisely that - a toy - and that it presented no threat.  They can't assume that any longer.

Similarly, if you're confronted by a young criminal waving something like that shotgun, you can no longer assume it's a toy.  It may be a deadly threat.  Certainly, if I see something like that, I'm going to take every precaution to safeguard myself and my wife.  Tragically, that may expose real kids, with real toys, to real risk . . . but then, criminals don't care about such niceties.

You know it was bound to happen. The minute orange barrels were required on toy guns was the exact same minute criminals started painting their barrel tips orange. the whole idea of an orange painted barrel end was beyond stupid to begin with, the consequences inevitable, dead kids and caught off guard cops. Another example of those Freaking do gooders and their not-thought-through idiocy.

Could someone in the DS have planted the idea; thus, someone will - eventually and inevitably - plug a kid who was waving an actual toy threateningly as a pretext for more gun control?

I've been wondering about this sort of thing for some considerable time now. It utterly fails to surprise me. Really, the only surprise is that it took this long for news of such to reach me.

This will result in 10,000 calls to ban real guns, toy guns, and green, yellow, and orange paint, but exactly zero calls to ban either criminals or stupid laws about marking toy guns, let alone stringing useless legislators up by the thumbs for sport.

Welcome to Spokompton. (eyes roll to the stop pins)

High probability that he stole the BP guns (or acquired them as stolen property from someone else), and couldn't figure out how to load them. Then, bought or stole (gee I wonder which) the foam-dart O/U toy to paint up.

Question is, was meth-head's full plan to carve the "chambers" of the toy and try the shotshells in the picture? Because I can see that happening...

Please note that WA *is* shall-issue, and thus even the most careful victim selection carries lethal risk.

Ygolonac - it isn't a toy, it's a real shotgun painted to look like a toy.

And, yes, kids (well, teenagers) have already been shot for pointing toy guns at cops. And BB guns. And guns with orange tips. And cops have been shot with guns with painted orange tips.

There are also jerks out there who figured out how to retrofit guns into super-soakers.

As Aesop so succinctly put it, this will not result in any calls to stop criminals, just calls to make more criminals.

Slightly off topic:
A cautionary tale:
A buddy of mine says, "We only catch the dumb ones."
But some bad guys are still clever.
One day his spidey-sense went off and he patted down a young man and found he had a shotgun with the butt and barrel sawed off suspended by string down the inside of his pant leg. He had cut the front pant's pocket out of jeans for easy access.
He could just reach his right hand into his pocket and pull out his shotgun and get busy.

I, myself, have encountered the "These are not my pants!" several times doing searches, but that one is the topper.

Every criminal caught doing that should have double the original sentence.