The northbound off-ramp on the M1 Pacific Motorway at Cameron Park in Newcastle is expected to remain closed into the evening after a truck transporting a huge piece of refinery equipment became wedged on the guard rail. 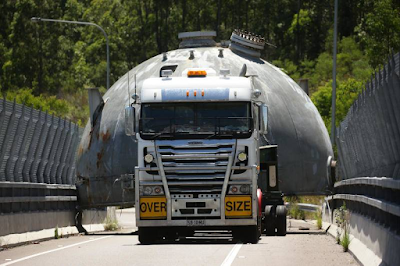 The incident has caused traffic chaos, as the scene remains closed to motorists.

Emergency crews and experts including police, Rural Fire Service, RMS, heavy vehicle inspectors and a bridge engineer have spent the day trying to extricate the truck from the off-ramp, but the vehicle is wedged in tight.

I've seen taller loads squashed under bridges, but that's the first wide load I've seen that couldn't get through a tight spot.  Around here, loads like that often take off-ramps to avoid going under bridges or between guardrails on the highway.  Their escort vehicles lead them up the off-ramp, across the crossing road, and down the on-ramp again, precisely to avoid that sort of trouble.  I guess there wasn't an alternate route in this case . . . but surely someone should have done the measurements, and foreseen trouble?  (Unless they measured above or below the constriction of the guard rail.  That might be a factor.)

That looks like a lid for a cat cracker or coker tower. Seeing
these things rebuilt in the field is impressive. The cranes used
to tear down equipment like this is nothing short of humongous!

I suspect the railing and barricade above it are new additions to the bridge. Measurements of the original walls would obviously clear the object. Typically a route is laid out prior to building an oversized item, so problems can be sorted out beforehand.

One of the photos is captioned:

"The wide load on the truck shifted, causing it to become wedged"

The width may have been measured from the deck of the unloaded truck and the drop from the weight lowered it down to the narrower part of the bridge.

The equipment wedged in place IS a variable-width item. Perhaps calculus should have been some part of the vetting process?

I remember one NJ winter's snowy commute that ended like that. They were doing construction and had shifted the left lane further left, and between two rows of concrete dividers. With all the snow, the plow couldn't get enough snow out from between the dividers, and the heavy, wet snow piled up. Suddenly traffic came to a halt. I waited ten minutes, without moving an inch, so I got out and walked up to see what was going on. About 15 cars up I found a crowd standing around a small car that had lost it in the snow, gotten sideways, and wedged tight between the divides on the left and right side of the lane. It was in there so tight that 20 men couldn't even rock it, let alone move it. Took another hour and a half to get us all backed out of the construction so we could use the right lanes to continue on. Took 4 hours to get to work that day.