It looks funny, but it could get people killed


A few weeks ago I wrote about a criminal who was caught in the act of painting a shotgun to look like a toy, presumably to deceive police and/or his prospective victims.  Now, courtesy of Wirecutter, we find this, presumably AR-15-type rifle, disguised even more effectively. 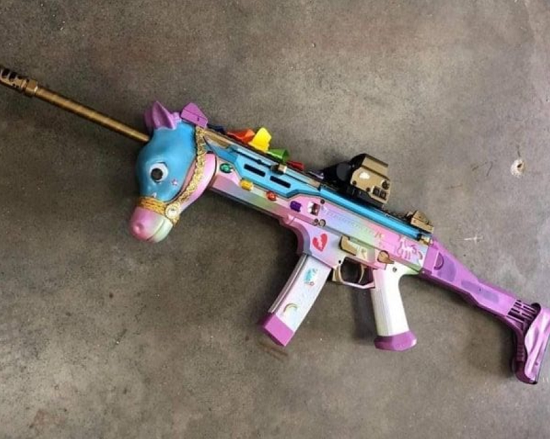 That's spendidly camouflaged . . . dangerously so.  We can laugh at it as an over-the-top "boys and their toys" sort of display, but imagine you're a cop on patrol, and you encounter someone carrying that in the street.  Your instinctive reaction would be to laugh out loud, and perhaps call to them - but what if they suddenly fired on you with it?  Your reaction times would be slower than normal, and you could end up dead or seriously injured.

Then, think of the consequences of that happening even once.  The very next time any cop sees any kid carrying an ornately decorated toy gun, he's going to assume - he'll have to assume, for his own safety - that the gun is real, not fake.  He's very likely to draw his own gun and train it on the "suspect" while he yells at them to drop it.  What if they panic (as children have been known to do)?  What if they don't drop it, but clutch it more tightly to themselves?  What if they try to run away, still clutching it?  What if the cop reads that action as a potential threat, and pulls his gun's trigger?

You'll have a wounded or dead child, and he'll be facing mass condemnation by the community for his "over-the-top", "over-aggressive" response.  In the light of the first shooting, it won't be "over-the-top" at all, from his perspective . . . but he and his agency will never win the public relations battle on that score.

I don't know what the answer to this mess might be.  Laws wont help - criminals don't obey laws in the first place, so they'll ignore them.  Appeals to kids' common sense won't help, either, because young kids generally don't have much common sense, and their parents often have even less!

An imitation toy like that shown above is a truly frightening thing.  It can lead to all sorts of unintended consequences - and tragedies.

That is not an AR-anything.

It is a CZ scorpion.

It is a range toy in a world without humor.

And if it's dark out, or the holder is in deep shadow...
Can a person who's colorblind be a policeperson????

It’s like the Hello Kitty AR in that it’s a one of a kind decoration job that someone did for a laugh. The decorations may be gone by tomorrow, and they may be gone now, but either way it doesn’t matter. It’s one gun.

The chances that any of those things happen approaches zero.

Why didn't the cop just shoot the gun out of little Bills hand?

Any cop that just shoots anyone holding ANYTHING without a clear threat should be tried for his crime.

They are armored and granted limited immunity. They will be provided a very skilled lawyer, and have the backing of their administration and union. It's not even in the top ten for dangerous jobs, and most LOD deaths are vehicle related.

They HAVE to be held to a higher standard.

The shift to "officer safety" and asset forfeiture are two of the most toxic things in policing.

A couple weeks back we were all gonna die when me and hordes of terrorist bastidges were gonna weaponize our toy drones and start dropping bombs on everyone and knocking down passenger jets.

Then it was Ebonics or Ebola...

Now it is clowns and gay juvies with My Pretty Pony rifles running amok in the streets.

What harrowing blood chilling scenario will we obsess about next week? Stay tooned!!! :)

That's a close copy of a gun from a video game - Fortnite? I think - and if you dig around you can find screenshots of the original digital-only item. (IIRC, there's a loop in the unicorn-horn barrel, which doesn't work in reality.)

I like the designs from Borderlands 2, myself, and would be horribly tempted to do at least one Torgue build if I had the spare funds.

If we disarm the police, we can reduce police shootings to zero. Sure, not every cop is a problem, butif it saves one life...

Agree with Zuk, and the chances that any criminal is using something like this approaches zero.