OK, this is worth a road trip!


I think I know where I'm taking Miss D. (and perhaps some friends) in January next year.

It’s 4:30 in the morning, and Anthony Guardian has a problem: His cooking oil is frozen. 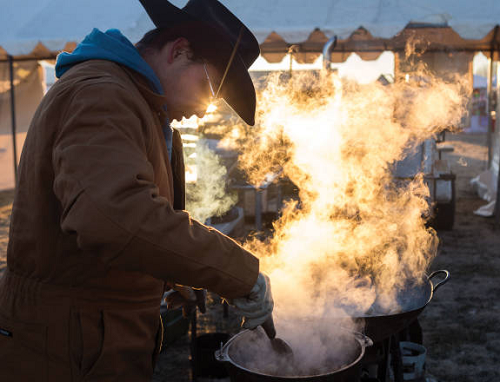 He’s getting ready for the 19th edition of the World’s Largest Matanza, an annual fiesta in the small city of Belen, N.M., that celebrates the state’s historic nose-to-tail hog-slaughtering festivals. Sixteen teams from across the state will gather in Eagle Park on this chilly late January day to feed traditional New Mexican matanza dishes — carne adovada, chicharrones, carnitas, red chile and more — to an estimated 9,500 attendees who’ll pay $15 for all they can eat.

Knowing its drawing power, the Hispano Chamber of Valencia County started what evolved into the World’s Largest Matanza in 2000 as a fundraiser for high school students.

“We can have a banquet,” says current board secretary Rita Garcia, “but isn’t a matanza more fun?”

The World’s Largest Matanza unfolds without any hitches, with attendees including military veterans, motorcycle club members and DEA agents. The temperature never exceeds 50 degrees, but no one seems to mind. The bands blast through their sets, with an announcer urging attendees to “dance off those chicharrones.”

By early afternoon, only a couple hundred people remain, mostly teams and their friends and family waiting to hear the winners in 10 categories such as carnitas, bizcochitos (an anise-flavored sugar cookie) and the Iron Pig, in which teams were tasked with cooking pork alongside a surprise ingredient: polenta. (“Maybe it’s not an exotic ingredient in Southern California,” says the head of judging. “But it is around here.”)


There's more at the link, and at the festival's Facebook page.

An article in New Mexico Magazine gives more information, and provides some mouth-watering recipes, too.  Here's one to whet your appetite.

Simple sauces like this are a mainstay of every matanza. Dip a freshly fried chicharrón into a bowl of it. Experience bliss.

That sounds so delicious, I'm going to try cooking it soon.  I might try a variation using New Mexico's famous Hatch green chiles, too.  My mouth's watering already at the thought!

Think I may give that chile sauce a try. Me and the missus would probably go through a batch easily.

How is bacon and grits "exotic"? I guess it sounds cooler when you call it pork and polenta, or something.