That brings back teenage aviation memories


British Airways is marking the centenary of its founding, on August 24th, 1919, as Aircraft Transport and Travel Limited (AT&T) - an acronym familiar to US readers for rather different reasons!  You can find a condensed history of the company here.

As part of its celebrations, the airline is painting five of its fleet in historic color schemes.  This Boeing 747-400 is painted to resemble British Overseas Airways Corporation's 747-100's, the first generation of the "Jumbo Jet".  Click the image for a larger view. 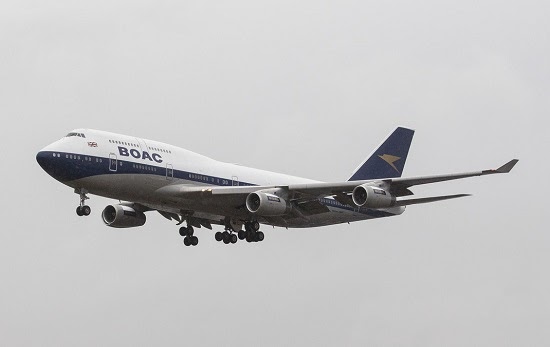 Back in 1973, my father was President of the Cape Town Chamber of Commerce in South Africa.  When BOAC began its 747 service between South Africa and England, he was one of those invited to accept a complimentary ticket on the inaugural flight.  He promptly pulled every string he could get his hands on, and got a second ticket for me - my introduction to foreign countries.  Our aircraft bore the same paint scheme as that shown above, gleaming new and fresh.

We had a pleasant enough flight, stopping at Nairobi to refuel and take on additional passengers (as was common in the shorter-ranged aircraft of those days).  We spent a few days with my sister and her husband in England, then flew to Zurich aboard a BOAC Vickers VC-10 airliner (shown below), a contemporary of the Boeing 707 that my father always said was one of his favorite aircraft.  It was certainly a very smooth flight, albeit a lot more cramped than aboard the much more spacious 747. 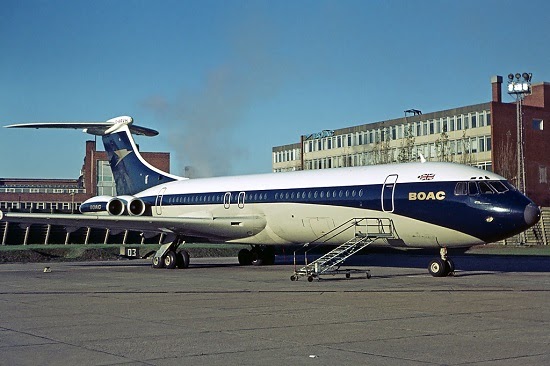 We took a train to Lausanne, where we spent a couple of days, then took another train through the Simplon Tunnel to Rome, Italy.  A couple more days there, and then we flew back to South Africa (again via Nairobi) aboard a BOAC Boeing 707.

Seeing that vintage BOAC paint job has brought back lots of nostalgic memories . . .

Those were the 'golden days' of air travel, unlike today... sigh

30 to 40 years ago the airlines actually fed their passengers in-flight (alcoholic beverages were still extra, though)

...seems the in-flight atmosphere was more formal and well-mannered as well.