Chicago's quality of life, by the numbers


I note that according to HeyJackass (which Second City Cop calls "the ONLY trusted source for actual crime numbers" - and do read the comments there, too), Chicago has passed another grim milestone for 2019. 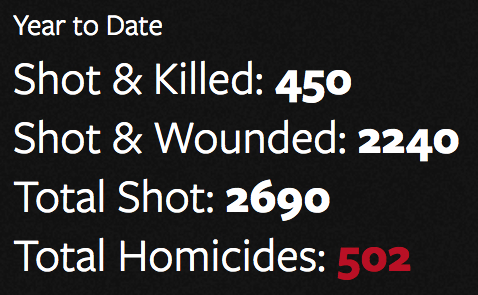 Five-hundred-plus homicides in a year . . . The latest mass shooting in Chicago says a great deal about why the numbers are so high.  Note that the gathering concerned was to honor - HONOR!!! - the memory of a thug and criminal who tried to carjack a vehicle, and was shot in the attempt.  Congratulations to the shooter, and thank you for removing a menace from the streets of Chicago.

Chicago cops just don't seem able to get a handle on the enormous crime rates there.  No matter how much is spent on them, no matter how many of them there are, the politically correct keep tying their hands and preventing them from doing what's needed to clean up the city.  I truly can't understand why the people of Chicago tolerate crime figures like those.  If the Texas city where I live had that sort of problem, I think the police wouldn't have to sort it out:  the local residents would.  All the cops would have to do is provide cleanup services.

Of course, as we've seen many times in these pages before, Chicago's a basket case in so many ways it isn't even funny.  Consider its fixed costs as a percentage of the city's operating revenues: 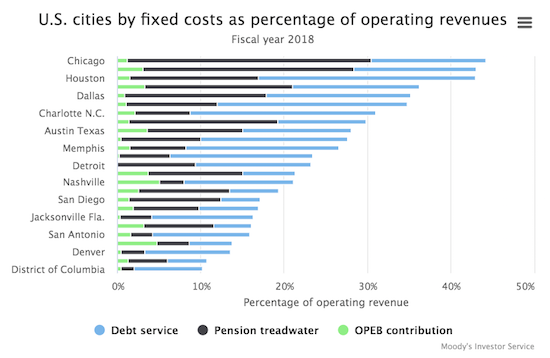 (See the original chart at the link for an interactive version.)  In 2018, the city had fixed payments relative to revenue of 44.2%.  In other words, for every dollar it collected in taxes, 44.2 cents were already committed or obligated - at least in theory, if not in practice - before it spent one single cent to pay for its day-to-day needs.  That's no way to run a city - or a corporation or a home, for that matter.  It's crippling the entire city administration, and is one reason why cops can't achieve more against crime in the Windy City.

I have friends who live in and near Chicago.  For the life of me, I can't imagine why . . .

I'm guessing everyone of those shootings or homicides did not involve a single gun toting, knuckle dragging, MAGA/NRA cap wearing Trump voter. Too bad we can't deport these problems to Africa or some other place. Yay duh-versity!!

The gangs get part time work helping the Aldermens campaigns in election years. Also look at the bright side: a couple years ago they were getting over 600 shooting deaths a year so things must be getting better.

Well, corruption pays well with only a slight risk of imprisonment. You get what you pay for, and they get it in spades. I am sooooo not looking forward to my Chicago trip this summer. You know things are bad when the website for the hotel prominently mentions that it's in a "safe" area.

The Chicago Tribune article linked regarding the CCL permit holder not being charged by the police is bupkis. The police can say all they want, but it's the prosecutor's office who will, 2-4 weeks down the line, suddenly lay charges against the CCL, for murder.

It happens all too often everywhere that a legally carrying gun owner shoots some morlock or goblin in self-defense. Police say 'good shoot, no charges' and down the line some schmuck of a prosecutor or state attorney sees an easy way to make publicity for himself/herself/itself and files charges against the shooter.

And even if the shooter is found innocent in the shooting after the prosecutor or state attorney drags the case through the court, the 'victim's' family, who were probably living off the illegal proceeds of said morlock or goblin's 'job' will file charges in civil court for loss of wages or pain and suffering or some garbage like that, and stand a good chance of winning some serious dough.

Not to mention all the mental anguish that the shooter will be going through.

Police say no charges... Yeah... Never ever believe that.

"Black Lives Matter!" should and will be a reality to everyone when they start mattering to blacks. And that will be when NO blacks are killed by other blacks in places like Chitown.

You need to see a map of where the shooting occurred, I'll bet most of that was in just one part of the city.

I live 45 miles outside of the South Side.....which is where about 85% of the fun happens. One dominant demographic group.

I try not to go to that area if possible, for obvious reasons.

Huh. Where's Baltimore? Would have thought they'd be in the top ten...