I had to laugh at this report from England.

A WACKY dad left his neighbours in stitches after accidentally ordering an inflatable Santa the size of his house. 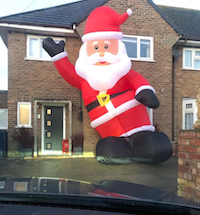 Matty James bought the £100 blow-up decoration off eBay thinking it would spruce up the outside of his home.

But instead of the 8ft Father Christmas he was expecting the nightclub owner was left in disbelief as he began to blow up the jolly giant.

The supersized Santa ballooned into a 25ft accessory, towering over the neighbourhood and blocking the Southport resident’s windows.

"When I woke up in the morning I looked out and his head would eclipse the window,” he said.

"Downstairs in the front room, when you opened the curtains, there was a big Santa bum in your face.”


There's more at the link, including more (and larger) photographs of the immense Santa.

I bet I know what happened.  He thought he was buying an 8-foot tall Santa figure, whereas it was really an 8-meter Santa.  8 meters, in the metric system, translates to almost 25 feet in imperial measurements.

Too many years of thinking that 6cms were 6 inches?

Of course, now I want to know what ebay-seller is selling 8M inflatable santas for £100. . .

At least he wasn't trying to land on Mars.