I've had dumplings in many and varied forms, from the American standby of chicken and dumplings (the latter not being "dumplings" at all in the classic sense, but simply dough cooked in the chicken sauce), to Chinese dumplings (and their closely related cousin, potstickers), to variations of the theme in many countries.  I've enjoyed most of them.

However, until I came across this article, I'd never heard of "khinkali", a dumpling claimed as a native dish by Georgia.

At the height of summer, Tbilisi is a heat trap. Ringed on three sides by an amphitheatre of mountains, the Georgian capital sits in a valley where stifling, humid air collects. Right up until evening, just traversing the city can be a life-sapping slog.

Walking the streets in June, it is surprising, then, to see families sit at lunchtime around restaurant tables piled high with swollen, boiled dumplings, named khinkali (the kh is pronounced as a throaty h). Each is almost the size of a tennis ball, and nearly bursting with meat, spices, herbs and all the juices that ooze from these uncooked innards as the dumping boils, which end up trapped inside the dough to make a puffy orb of broth.

Often, all you see are the post-meal remains: a graveyard of thick, pinched dumpling nibs, from where the khinkali is sealed. As you eat, you grip this dough-handle, and then discard it like so many headstones for departed snacks. Despite Georgia’s reputation as the birthplace of wine, a frosty beer is understandably the preferred summer accompaniment.

At first sight, a few dozen dumpling-tops suggests that a gut-busting quantity of meat-filled dough and broth has been consumed in the middle of a sweltering day. But with the first bite into a khinkali, it is easier to understand going back, again and again. The rush of broth that escapes has a delicate flavour of just-cooked spiced meat that’s comforting but neither heavy nor greasy.

During blistering winters in Tusheti, temperatures regularly fall below -15°C, and villages on the slopes of the Caucasus Mountains are cut off by metres of snowfall. For centuries before becoming restaurant favourites, khinkali were a warming offering for Caucasus shepherds, with chopped lamb or mutton at the centre, which was replaced by ground beef and pork as the dumpling migrated to the city.

Intrigued, I looked for recipes for khinkali, and found quite a few through a quick Internet search.  This one provides a step-by-step photographic guide, very useful for novice cooks and those who aren't sure how to proceed.  Here's how it portrays the finished product. 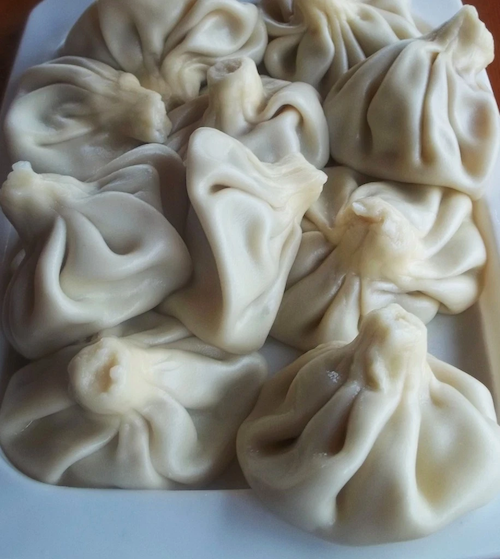 I think I know what I'm going to try to cook, the next time my turn comes around to cater to the regular suppers of the North Texas Writers, Shooters and Pilots Association!

Had these from a Georgian food truck when I lived in the San Francisco bay area. Delicious! They are on a long list of foods to try and make.

That looked good!
I copied a recipe and saved the link to the one will all the pictures. I'm going to have to try this.

Looked at the recipes and spice options and drooled. They look very good, with frigid weather coming.

Yes, I have, the cook was Kazakh and they were made with lamb. The fat was unprocessed pork because I didn't know where to get lamb suet for her. Delicious! LOL We didn't know we weren't suppose to eat the knob until she told us.

I just read the same article the other day while looking up the UK election results. It's another little push moving Georgia up my list.

No, I haven't heard of them before, but they sound great.
What we had at the old place was "kinklings", a kind of doughnut.